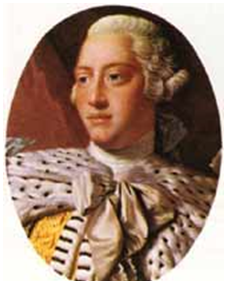 xxxxxGeorge III (1738-1820) succeeded his grandfather, George II, as King of Great Britain and Ireland and the Elector of Hanover in 1760, beginning a reign which, officially, lasted sixty years. The first period of his rule opened with the final engagements of the Seven Years' War and the favourable Treaty of Paris in 1763 and - mainly due to his own intransigence and the ineptitude of his chief minister Lord North - ended with defeat in North America, the loss of the American colonies, and the humiliating terms of the Peace of Paris twenty years later. (The portrait is by the Scottish artist Allan Ramsay.)

Unlike his two predecessors, George III was born and educated in England. He therefore showed little interest in Hanover, being determined to rule as well as reign in the land of his birth. We are told that on his accession his mother whispered to him “George be a king!”, but he didn’t really need her advice. A headstrong and skilful intriguer, he was determined to assert his royal prerogatives. Taking a leaf out of the Whigs' book, he achieved his end by bribery and patronage - the giving of money or lucrative appointments to ensure a member's support. He chose the ineffectual Lord Bute as his chief advisor, and he it was who brought the Seven Years' War to a speedy end following William Pitt's resignation in 1761. This served to break the power of the Whigs, the party which had dominated English politics during the reigns of the first two Georges. Butexdid not last long, and nor did his successors, George Grenville, Lord Rockingham and the Duke of Grafton, but in 1770 king George found a man who would faithfully do his bidding, the able and congenial Lord North (1732-1792). Together they built up a party of King's Friends in parliament, and gained the support they required. 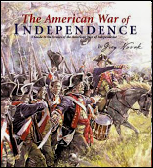 Not without good reason, the next twelve years came to be known as the king's "personal rule", and it was during this very period, as we shall see, that the policies he pursued provoked the American War of Independence. Throughout the rebellion the king remained adamantly opposed to any form of concession. As a result, the protest smouldered on - fuelled by such events as the Boston Massacre and the Boston Tea Party -, burst into the flames of war in 1775, and ended in a humiliating defeat for the British government and crown at the Battle of Yorktown in 1782. George was devastated by this outcome, but not repentant of his actions. Indeed, he so detested the granting of independence to the American colonies, that he even considered abdication. In the meantime, North was forced to resign, and there followed a period of political turmoil in which three ministries were formed and fell apart in the space of two years.

As one would expect, the very idea of a King's party came under fierce attack. The Member of Parliament for Aylesbury, John Wilkes (1725-1797), for example, in his 45th edition of his periodical North Briton in April 1763, launched a particularly bitter attack upon the king's political activities and his supporters. Regarded as seditious, he was expelled from the House of Commons and arrested by the government. The law court's condemnation of this arrest was a landmark in the struggle for personal liberty and the freedom of the press. He took refuge for a time in France, but the need for parliamentary reform was further heightened in 1768, when he returned and was elected three times for Middlesex. Being regarded as an outlaw, he was arbitrarily expelled by the Commons, but this only served to make him a martyr in the cause of liberty, and increase the demand for changes in the electoral system.

And there was some powerful criticism, too, of the king's personal policy towards the American "rebels". The politician Edmund Burke, for example, arguing for the independence of the Commons, spoke out in favour of the colonists on the question of taxation, and called for conciliation. Likewise the Whig leader Charles James Fox openly opposed the king's policy during the American War of Independence, and this led to a bitter feud between the two men, ending with Fox being forced from government in 1783. Andxonly three years earlier a resolution put forward by John Dunning and passed by a small majority had bluntly stated that "the influence of the Crown has increased, is increasing and should be diminished".

And open conflict was not confined to distant overseas territories. At home, a revolt broke out in Ireland in 1763, a protest against the harsh conditions endured by those working on the land, and in April 1780 the Irish leader Henry Grattan (illustrated) demanded Home Rule for Ireland. Later in the year, Ireland was granted free trade with Britain and allowed to take part in the lucrative trade with the colonies, but this was not sufficient. Nor did the amendment of Poynings' Law in 1782, giving legislative initiative back to the Irish Parliament, stop the protest. As we shall see, unrest continued and in 1798 (G3b) led to an uprising of Irish Catholics demanding parliamentary reform and total Catholic emancipation, a rebellion which culminated in the Battle of Vinegar Hill.

Meanwhile in England a strong anti-Catholic movement arose against the Catholic Relief Act of 1778, in which penalties imposed on Roman Catholics were removed - much against the wishes of the monarch himself. In June 1780 the so-called Gordon Riots or "No Popery" riots broke out in London, and Roman Catholic churches were plundered. Its leader, Lord George Gordon - who was later acquitted of a charge of treason - led a protest march to the Houses of Parliament, and this was followed by several days of rioting and the death of 300. These disturbances were to figure later in the novel Barnaby Rudge, published by the English novelist Charles Dickens in 1841.

Because of his interest in the changes taking place in agriculture, the king was often affectionately referred to as "Farmer George", but as we shall see, it was during his time as monarch that Britain was to be slowly transformed from an agricultural to an industrial nation. In this first period of his reign, men like the engineers James Brindley, Abraham Darby and James Watt, and the textile inventors James Hargreaves, Richard Arkwright and Samuel Crompton, - not to mention scientists like Joseph Priestly - were to bring about the beginnings of the Industrial Revolution.

In 1756 George suffered his first attack of insanity, probably due to an illness called porphyria which affects the brain and the nervous system. He recovered fairly quickly but, as we shall see, he suffered further and more serious attacks as his reign progressed. Despite his determination to take over the reigns of government on coming to the throne, he was an honest, family man with a sense of public duty and, in general, this made him a popular monarch. At the age of 22, however, he lacked the self-confidence and the political maturity required to lead the country in these early years, and his obstinacy got in the way of conciliation. Only later did he develop more of the attributes required of a statesman.

xxxxxWith the fall of the Fox-North coalition, an unlikely merger which had been formed in April 1783 during the dying days of the War of American Independence, the king appointed William Pitt the Younger, son of Pitt the Elder, as his chief minister. A young man of just 24 years of age (illustrated), it was something of a gamble but, as we shall see (G3b), it was one that paid off.