xxxxxIn May 1763 the able Indian chief Pontiac, having formed a confederation of tribes along the North American frontier, launched a co-ordinated attack upon 12 British forts and captured eight of them. He himself attacked Detroit, but his plans were betrayed and he failed to take the city. After winning the Battle of Bloody Run, he was forced to retreat. The British eventually got the upper hand and Pontiac was obliged to make peace by 1766. The war proved costly for Britain and, as we shall see, this was one of the reasons why its government introduced the Stamp Act in 1765, a tax whereby the colonists could pay towards the cost of their own defence. It was to stir up a hornet's nest!

xxxxxPontiac was a American Indian and chief of the Ottawa tribe from 1755. A cunning and resourceful leader, he allied with the French during the Seven Years' War and became renowned for his fighting spirit and ability. In 1762, realising that a British victory in North America was imminent and would mean a loss of his people's traditional hunting grounds, Pontiac devised an ambitious strategy to expel the British. He formed a confederation of practically all the Indian tribes from the head of Lake Superior to the Lower Mississippi and planned a co-ordinated campaign for early May 1763. On a certain date, each tribe would attack and, having seized the nearest fort, would then combine forces to recapture their ancestral land. 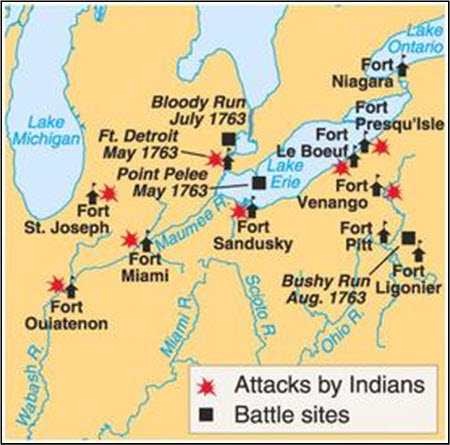 xxxxxThis well-conceived plan, coming so quickly after the defeat of the French, took the British completely by surprise. Initially, it proved highly successful. Eight out of twelve forts were captured and a number of relief expeditions were intercepted and suffered heavy loses. This allowed the frontier settlements to be overrun and plundered. Pontiac himself attempted to capture Detroit, and might well have done so had his surprise attack not been leaked to the fort commander. He then laid siege to the fort and at the end of July won a brilliant victory at the Battle of Bloody Run. However, he could not stop reinforcements arriving, and in October he was forced to withdraw to the Maumee River.

xxxxxBy 1764 the British began to regain the initiative, and the peace treaty between France and Great Britain having removed all hope of French aid, Pontiac began negotiations in August 1765, and a peace settlement was confirmed at Oswego the following year. Three years later he was murdered by a Peoria Indian in Illinois, apparently at the instigation of a British trader, and this led to a period of bitter warfare between the local tribes.

XxxxxPontiac’s War, conducted across a wide area of frontier settlements, added enormously to Britain’s defence budget. As we shall see, this was one of the reasons why the British chancellor, Sir George Grenville, felt it necessary to introduce the Stamp Act in 1765, a tax whereby the colonists could pay something towards the cost of their own defence. It was to stir up a hornet's nest!

xxxxxIncidentally, in his co-ordinated attack on the British, Pontiac was greatly influenced by the messages given to him by the so-called Delaware Prophet, a religious visionary who saw the revival of ancient Indian ways as a means of resisting the whites. After the failure of the rebellion in 1766 little more was heard of the “prophet” or his teaching. ......

xxxxx...... The city of Pontiac, seat of Oakland County in Michigan, not far from Detroit, was named after the famous chief of the Ottawa Indians. ......

xxxxx...... Wacousta, written by John Richardson (1796-1852) in 1832 and telling the story of the Pontiac Rebellion, was the first novel based on Canadian history.

xxxxxIt was during Pontiac’s War that occurred what came to be known as the Paxton Boys’ Uprising. In December 1763 over 50 drunken rangers from Paxton, Pennsylvania, travelling near Lancaster, slaughtered the last of the Susquehanna (or Conestoga) Indians, some twenty in number. Governor Penn ordered that these men be arrested and tried, but the residents of this frontier area, already highly critical of the lack of defence provided by the provincial assembly, sympathised with the Paxton Boys, and 600 of them, well armed, marched on Pennsylvania. A delegation from the city, which included Benjamin Franklin, met the protesters and managed to calm the situation. There were no prosecutions!