xxxxxHorace Walpole, son of the statesman Robert Walpole, was a member of parliament for over 25 years, but his interest really lay in printing, publishing and the arts. He is best known for his spooky tale The Castle of Otranto of 1764, a so-called "Gothic novel" which, by its terror and supernatural manifestations, founded the English romantic movement in fiction. He is also remembered for his home Strawberry Hill in Twickenham, a villa which he transformed into a medieval castle, lavishly decorated and furnished, and housing a valuable library and art collection. He also wrote a history of art in his Anecdotes of Painting in England of 1771, and the 3000 or more letters that he left, brilliantly written, provide a fascinating insight into his life and times. He was a life-long friend of the English poet Thomas Gray. As we shall see, in the genre known as the "romance of terror", future writers were to include Ann Radcliffe, Matthew Gregory Lewis and Mary Wollstonecraft Shelley, the creator of Frankenstein. 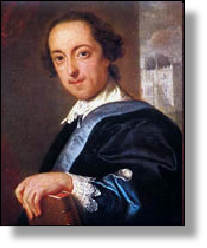 xxxxxHorace Walpole, youngest son of the British statesman Robert Walpole, was a novelist and prolific letter writer, but he also served as a Whig Member of Parliament for over 25 years. He is best known for his spooky tale entitled The Castle of Otranto, published in 1764, and for Strawberry Hill, his villa-cum-castle at Twickenham, near London, an irregular piece of Gothic architecture which attracted much attention. Later, he also gained a well-earned reputation for his vast collection of brilliant letters.

xxxxxHe was born in London and educated at Eton College, and it was here that he met his life-long friend, the English poet Thomas Gray. After attending King's College, Cambridge, he travelled in France and Italy with Gray and then, on his return, entered Parliament in 1741. He remained an MP until his retirement in 1768, but throughout a long political career he was only assigned minor government appointments - and even these may have been due to the influence of his father! His real interest lay in printing, bookmaking and the literary arts, and in these pursuits he made a valuable contribution. In 1757, for example, he set up a printing press at Strawberry Hill (known as the Strawberry Hill Press) and produced some fine books, including works by Thomas Gray and Hannah More. Here, he also built up an extensive and valuable library, and contributed to it with his own work, a four-volume study of the art of history in his Anecdotes of Painting in England, completed in 1771. 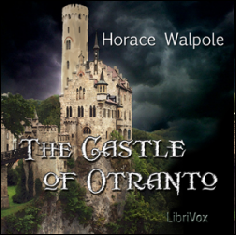 xxxxxIt was in 1764 that he gained immediate success with his highly popular novel The Castle of Otranto. Set in Italy, this melodrama tells of the trials and tribulations of the beautiful and innocent Isabella in her struggle against the villainous Manfred and the powers of darkness. This was the first of the so-called "Gothic novels", a genre which founded the English romantic movement in fiction. Known also as the "romance of terror", such tales fascinated, thrilled and frightened their reader by their descent into the "unknown". Full of horror, violence and mystery, they were set against a gloomy background of Gothic ruins, and heightened in suspense by supernatural manifestations and the use of secret passages and stairways. As we shall see, future writers of these gothic thrillers were to include Ann Radcliffe, Matthew Gregory Lewis and Mary Wollstonecraft Shelley, famous for her creation of Frankenstein. 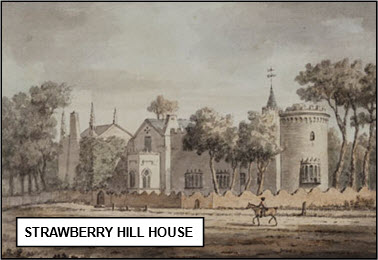 xxxxxAnd gothic, too, in its inspiration and execution was the weird and wonderful fantasy "castle" that Walpole made out of a modest villa he bought at Twickenham in 1747 (illustrated) - then a small town just outside London. Over the years he added a selection of turrets, battlements and towers, and lavishly decorated and furnished the interior, making the residence a showplace like no other. Not surprisingly, this mock Gothic extravaganza created much interest and played no small part in the revival of gothic architecture in England. Walpole was seen as leader of the “true Goths”.

xxxxxBut quite apart from his hair-raising novel and romantic, medieval "castle", Walpole was later to gain a well-earned literary reputation for the quality of his correspondence. As an admirer of the French writer Madame de Sévigné, he regarded letter writing as an art form. He left a collection of more than 3,000 letters and these, mostly written to his friend Horace Mann, provided a witty, refined commentary on his life and times. Meanwhile his Memoires, covered the major political events of his lifetime during the reigns of George II and George III. In addition, he wrote a number of plays, poems and political pamphlets, and, as an art connoisseur, amassed a large collection of pictures and curios at Strawberry Hill. In 1791 he inherited a peerage, becoming the 4th Earl of Orford, but, remaining unmarried, the earldom became extinct at his death.

xxxxxThe young poet Thomas Chatterton (1752-70) took an interest in medieval manuscripts as a boy, and at the age of 13 began writing a series of poems in Middle English, claiming that he had found them in a church in his native city of Bristol. Purporting to be written by a 15th century monk named Thomas Rowley, they fooled a number of people, including Horace Walpole for a time. In 1770, at the age of 17, he came to London, but he failed to make a living and, near to starvation, he committed suicide. His tragic death brought his Rowley poems under closer scrutiny. By their rhythm, sensitivity and romantic imagination, they were seen as precursors of the growing romantic movement, and he was hailed by some as a poet of genius. The English poets Wordsworth, Byron, Scott and Rossetti praised his work, whilst Coleridge, Shelley and Keats wrote tributes to his memory. It was not until 1871, in fact, that the poems were proved to be forgeries. 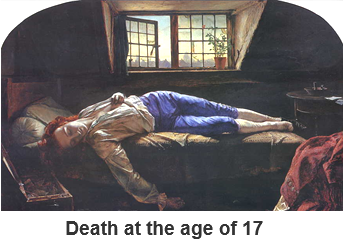 xxxxxA contemporary English poet who was known to Horace Walpole was Thomas Chatterton (1752-70), a young man whose brief and tragic life served as an inspiration to English Romanticism. Born in Bristol, he attended Colston's Bluecoat School, but spent much of his time in the church of St. Mary Redcliffe, where his father was the sexton. Here he discovered a chest of old parchments, and became familiar with the old English style of writing. His first known poem, composed when he was ten, was a piece entitled On the Last Epiphany, written in the style of John Milton. He followed this up with a short pastoral poem which he called Elinoure and Juga. Written on vellum and carefully stylised, it was received without question as a piece dating from the 15th century. Encouraged by this success, he now turned his thoughts to deliberate deception.

xxxxxIn 1766, at the age of 14, he was apprenticed to a solicitor, but he continued to spend all his spare time studying medieval manuscripts. From that time onwards he began producing a series of poems in Middle English, claiming that he had found them in the church of St Mary Redcliffe. Purporting to be written by a 15th century monk named Thomas Rowley, they seemed genuine enough. Indeed, when, in 1769, Chatterton sent several of these poems to Walpole he was at first taken in. It was only later, after being advised that they were fabricated, that he rejected them and curtly advised him to stick to his present job!

xxxxxHowever, the following year, at the age of 17, Chatterton threw in his apprenticeship and came to London. Here, for a matter of months, he churned out articles, satirical poems and stories for a number of periodicals. Unable to make a living, however, he came near to starvation. Eventually, depressed by his failure as a writer, he poisoned himself by taking arsenic.

xxxxxIronically enough, after his death the Rowley poems, written to deceive, gained him recognition for their rhythm, sensitivity and, above all, their romantic imagination. As such, they broke away from the literary conventions of the 18th century, and gave further impetus to the growing romantic movement. His untimely death, the manner of it, and the talent thereby denied, evoked widespread sympathy and concern, particularly in the literary world, where he was seen by some as a poet of genius. Praise was forthcoming from the English poets Wordsworth, Byron, Scott and Rossetti, whilst Coleridge, Shelley and Keats wrote tributes to his memory.

xxxxxFor many years after his death, controversy raged over the authenticity of the Rowley poems. It was not, in fact, until 1871 that an expert in Old and Middle English Literature, W.W. Skeat, provided convincing proof that they were forgeries. It was also discovered that the name Rowley was actually taken from a memorial in St. John's Church in Bristol. 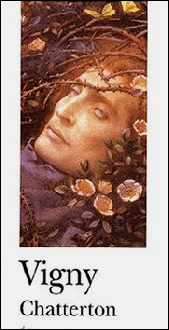 xxxxxIncidentally, in 1835 the French poet, novelist and dramatist Alfred de Vigny wrote Chatterton, a romantic drama based loosely on the life of the English poet, and this was later used for the production of an opera by the Neapolitan composer Ruggero Leoncavallo (later famous for his opera Pagliacci in 1892). ……

xxxxx…… The painting above, The Death of Chatterton, was the major work of the English Pre-Raphaelite artist Henry Wallis (1830-1916). He searched out the very attic in Holborn, London, where the young poet had committed suicide in order to provide the authentic setting, and he used natural lighting to heighten the dramatic effect. The model for Chatterton was the first wife of his friend the English novelist George Meredith. When the painting was finished in 1856, she and Wallis ran away to the isle of Capri together! ……

xxxxx…… The English poet Francis Thompson, remembered especially for his ode The Hound of Heaven, published in 1893, came near to taking his own life sometime in the mid-1880s because of his failure to make a living by his verse, but was dissuaded from doing so after seeing, so he believed, a vision of the young Thomas Chatterton.