xxxxxAs we have seen, Gibraltar was captured by the British in 1704 (AN). Over the years, the Spanish made a number of unsuccessful attempts to regain the “Rock”", and then in 1779, allied with the French, began the Great Siege, not lifted until 1783. The British were seriously outnumbered, but despite heavy bombardment, an attack by fire ships, and concentrated fire from floating gun platforms, the defences could not be breached. During the siege British engineers tunnelled into the Rock itself, and established gun emplacements at a number of vantage points. This increase in firepower proved significant. Having failed again, this was the last attempt by the Spanish to regain the fortress by force of arms. 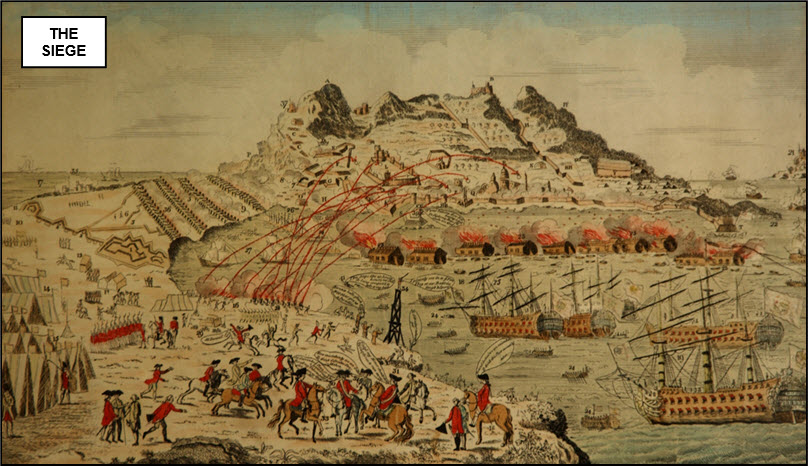 XxxxxAs we have seen, Gibraltar was attacked and captured by an English fleet under the command of Admiral Sir George Rooke in July 1704 (AN). By the Treaty of Utrecht of 1713 which ended the War of the Spanish Succession, the “Rock”, as it came to be called, was ceded to the British. The Treaty made it clear that “the town, castle and fortifications were to be held and enjoyed for ever without any exception or impediment whatsoever”. It was to prove a rock indeed in the history of British sea power, and, not surprisingly, the treaty was renewed in the Treaty of Paris of 1763, and again twenty years later.

xxxxxThe years that followed the Treaty of Utrecht witnessed a dozen attempts by the Spanish to recapture the rugged peninsular on their southern coastline, but the natural fortress proved easier to defend than to attack. There was a particularly serious attempt in 1727, but the last, longest and most promising siege of Gibraltar came in 1779. With the French having the previous year come out in open support of the American colonists in their fight against the British, the Spanish now saw a golden opportunity to recapture their spit of highly valuable land. 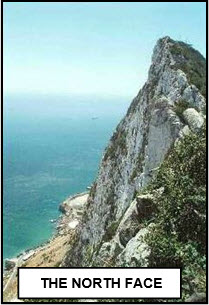 xxxxxKnown for obvious reasons as the “Great Siege”, it lasted from July 1779 to February 1783, and caused a great deal of destruction to the town and its fortifications. A combined Spanish and French force launched a massive, all-out attack upon the fortress, and it was only by the courage, endurance and ingenuity of the small garrison guarding the Rock that the siege failed. The British had something like 6,000 men and only 96 guns compared with an allied force numbering 40,000 men and 246 guns. Apart from the enemy's bombardment, and an all but successful attack by fire ships, food became very short at the height of the siege. Yet in November 1781 the British took the fight to their opponents and launched a surprise assault upon their lines. In a lightning attack which came to be known as the “Sortie” they emerged from their stronghold and destroyed a number of enemy batteries mounted on the isthmus.

xxxxxBut perhaps the major contribution to the survival of the rock fortress in this particular siege was the valuable improvement made to the garrison's fire power, an improvement which came about almost by chance. In 1782 the governor of Gibraltar, General Eliott, an outstanding leader, offered a reward to any member of his staff who could work out a way of getting a gun onto a small promontory called the 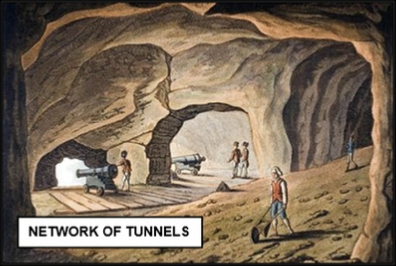 ”Notch” on the steep northern face of the Rock. Attempts were made to hoist up an artillery piece, but the task proved too difficult. AxSergeant Major Ince then came up with the idea of tunneling through the Rock to reach the vantage point. The “tunnelers”, with sledge hammers and crowbars and the occasional use of gunpowder, set to work in May 1782.

xxxxxIn five weeks 18 men had cut an 82 foot tunnel into the Rock, but as they went deeper towards the Notch they could hardly breath because of the dust from the digging and the fumes from the blasting. It was decided that a side tunnel had to be made to reach the face of the Rock and let in more air. This they did, and then quickly realized that by making the air vent larger they would have, in fact, the perfect gun emplacement! By the time the siege ended the tunnel - called “Windsor Gallery” - was 370 feet long, and four guns had been mounted along its length. And to ensure that these guns could be fired down upon the enemy at a steep angle, a Lieutenant Koehler designed a carriage for this purpose. Atxthe same time, another member of the garrison, Lieutenant Henry Shrapnel (1761-1842), was experimenting with a type of ammunition - a fragmentation shell - that still bears his name. (This shell was adopted by the British artillery in the early years of the 19th century.)

xxxxxThe Rock’s ingenious defence system did not come a moment too soon. By September of 1782, the Spanish and French had come to the conclusion that a heavy bombardment was needed before troops attacked by sea and land. They converted a number of double-hulled vessels into floating gun platforms in order to sail close to the Rock and blast a hole in its defences. The tactic was a sound one, but the British, to counter this threat, used cannon balls which had been heated in a furnace just prior to discharge. These penetrated the hulls of the floating batteries and blew them out of the water. Despite precautions taken against fire - by carrying wet cork and sand - the vessels then burst into flames. The Bay, remarked an onlooker, was “lit up” by burning ships. No further attacks were made, and in the New Year the siege came to an end. When it was all over, the commander of the French and Spanish forces, the Duc de Crillon, was invited to see the improvements which had been made to the Rock's fortifications. When he saw the tunneling and the new gun emplacements he is reported to have said: “These works are worthy of the Romans”. It was a fitting tribute. 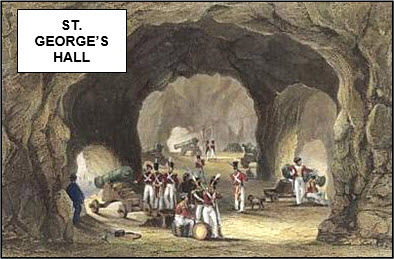 xxxxxInxrecognition of his gallant leadership, General George Augustus Eliott (1717-1790) was created 1st Baron Heathfield of Gibraltar. As a reward for his part in the siege, Sergeant Major Ince was given a commission and presented with a plot of land on the Rock, known to this day as “Ince's Farm”. In addition, the Duke of Kent - Queen Victoria's father - made him a gift of a valuable horse. Ince was a member of the Company of Soldier Artificers. Formed in 1771 and made up of 70 men, it was the forerunner of the Corps of Royal Engineers. After the siege the work of tunneling was continued. Today there are 30 miles of tunnels inside the Rock and a large number of caves. One of them, St. George's Hall (illustrated) was opened under the Notch and provided space for a battery of seven guns. It is here, we are told, that a banquet was held in honour of General Grant, ex-president of the United States.

xxxxxIncidentally, after the Battle of Trafalgar in 1805, the body of Admiral Horatio Nelson - stored in a barrel of rum - was brought to Gibraltar on its homeward journey.

xxxxx...... Legend has it that if the Barbary apes (actually monkeys) who live on the Rock were to die off that would mark the end of British rule. It is rumoured that during the Second World War the British prime minister, Winston Churchill, had more apes brought over from North Africa just in case! ......

xxxxx…… Gibraltar has suffered so many sieges over the years that the toast “to the siege of Gibraltar” is considered a valid excuse to have a drink at any time!