xxxxxAs we have seen, in 1733 (G2) the English weaver John Kay greatly increased loom production by his invention of the flying shuttle. The first attempt to increase the production of yarn was made by the English spinner James Hargreaves. In 1764 he invented his "spinning jenny", and this hand-cranked machine was able to spin yarn on a number of spindles at the same time, thereby increasing output many times over. Because hand spinners saw this invention as a threat to their livelihood, in 1768 a mob broke into his house near Blackburn and destroyed a number of his machines. As a result, he moved to Nottingham where, by going into partnership and using his invention, he made a comfortable living. As we shall see, his invention was superseded by Richard Arkwright in 1771 and Samuel Crompton in 1779. The Industrial Revolution, already under way, was about to move up a gear. 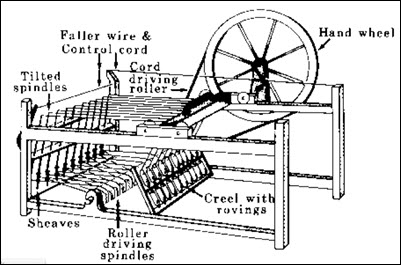 xxxxxAs we have seen, in 1733 (G2) the English weaver John Kay had greatly increased loom production by his invention of the flying shuttle. This, in turn, created a shortage of yarn and led to a number of attempts to increase its production. The first successful attempt was made by the English weaver and spinner James Hargreaves. In about the year 1764 he invented his "spinning jenny". This hand-cranked machine was able to spin yarn on a number of spindles - as many as 16 at a time - and this multiplied the output of a spinner to that extent.

xxxxxHe used it successfully at his home at Stanhill, near Blackburn (illustrated), but once he began to sell the machine, alarm spread among those hand-spinners using the conventional wheel. Fearing that such 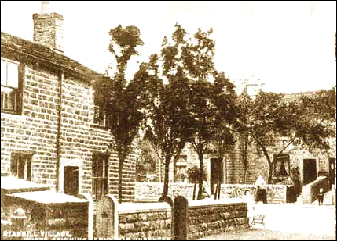 competition would lose them their jobs, in 1768 a mob from Blackburn broke into his house and destroyed a number of the "jennies". He was forced to move to Nottingham where, in partnership with a slightly wealthier man named Thomas James, he established a small mill, and used the jennies to make quite a successful business.

xxxxxThe spinning jenny was but the first in a long line of improvements in the spinning process. As we shall see, in 1771 the English inventor and textile industrialist Richard Arkwright came up with his spinning frame, and in 1779

Samuel Crompton, combining the best features of the jenny and frame, produced his “spinning mule”. The movement known as the Industrial Revolution - already under way - was about to move up a gear.

xxxxxIncidentally, it is generally accepted that Hargreaves' idea of a multiple spinning machine was due to his young daughter Jenny - hence the name of his invention - after she accidentally knocked over a spinning wheel. Observing that the spindle continued to revolve in an upright position, he concluded that one operator could spin several threads at the same time.