xxxxxAs one would expect, the terms of the Treaty of Paris which ended the Seven Years' War in 1763 were most favourable to the British. They gained all the French territory east of the Mississippi, and Spain ceded Florida, receiving the Louisiana Territory and New Orleans in return. In India, French power was broken, and the British were poised to take over the sub-continent. In Europe, the province of Silesia, once a valuable Austrian possession, was confirmed as part of Prussia, now a major continental power and destined to grow. Britain clearly emerged as the world's largest and most powerful colonial nation, but it was not without its problems. It had accumulated a vast war debt and, as we shall see, when it introduced a Stamp Act in 1765, taxing its North American colonies so that they paid something towards their own defence, it started a train of events which eventually led to a bloody war and American independence - confirmed at another Treaty of Paris exactly twenty years later. 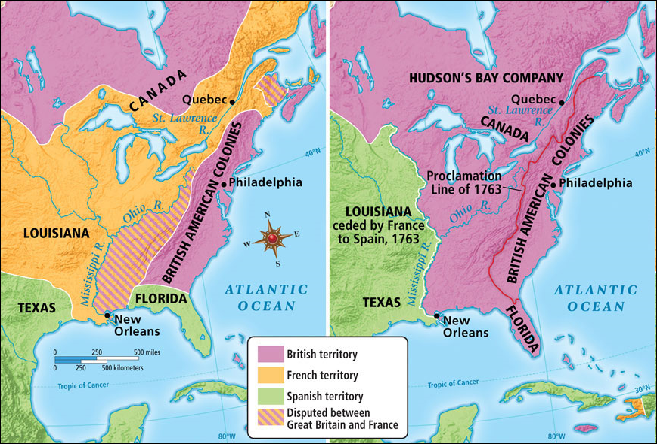 xxxxxThe Treaty of Paris of 1763, which brought an end to the Seven Years' War, was a triumph for the British. In North America, following their victory at Quebec in 1769 and their capture of Montreal a year later, all French territory east of the Mississippi was awarded to Britain. Spain ceded Florida, but in return received the Louisiana Territory and New Orleans. At the same time in India, where their power had been broken at the battle of Wandiwash in 1760 and by the capture of Pondicherry the following year, the French were only permitted to retain their possessions as commercial enterprises, and only under strict military supervision. In addition Britain gained Senegal in Africa, and retained a powerful presence in the West Indies.

xxxxxMeanwhile, in Europe the province of Silesia, once a valuable Austrian possession, was confirmed as part of Prussia, a fitting reward for Britain's staunch ally Frederick the Great, who had borne the brunt of the continental fighting and, at times, had come so close to defeat. His country now emerged as a major European power, and one destined to grow.

xxxxxThe treaty marked Great Britain out as the world's leading colonial power. Its prestige had never been greater. In particular, the complete overthrow of the French in North America, following a series of conflicts lasting three-quarters of a century, was particularly gratifying to the British. (The picture shows the formal surrender of New France at Montreal in 1760). In fact, however, their victory at Quebec 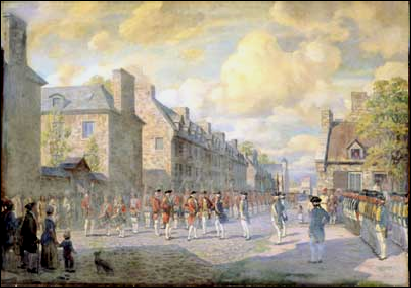 proved to be a two edged sword. Whilst much of North America was now in their hands, the removal of the French threat freed the American colonists from their dependence on the mother country. Although the thought of independence was far from the minds of the vast majority of colonists at this time, it had nonetheless become a possibility. And it was a possibility which was to become just a little bit more of a possibility two years later when a Parliament on the other side of the Atlantic began to tax the American colonies in order to recoup some of the cost of their defence. Britain may have won the war, but its war debts were considerable.

xxxxxAs we shall see, relations were to come somewhat strained with the passing of the Stamp Act - a subtle means of taxation - in 1765, just two years after the British had left the negotiating table in triumph. But very few would have imagined at that time that the next peace treaty to be signed at Paris, just twenty years from the last one, would see Britain thrown out of the North American colonies she had fought so hard and so successfully to defend. 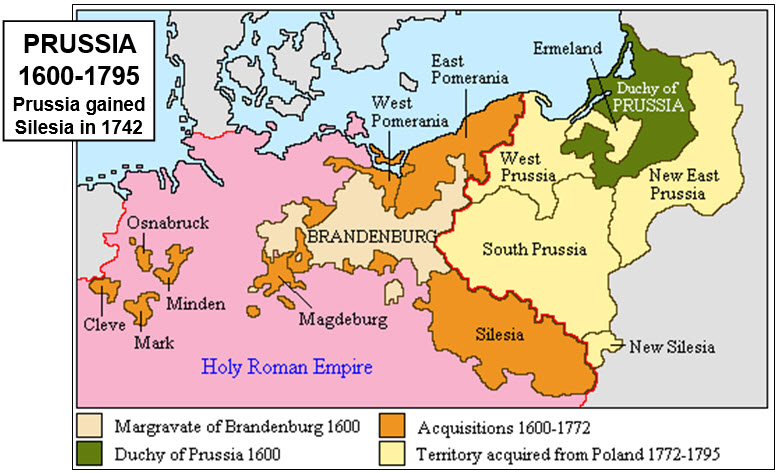