xxxxxThe Wealth of Nations of 1776, the major work of the Scottish economist Adam Smith, elevated economics into a separate branch of Science. In it he attacked Mercantilism - the theory that the state must protect trade by the use of subsidies and taxes - and came down in favour of private enterprise, free trade and mass production. The entrepreneur, he argued, was motivated by self interest, but, as though guided by an “invisible hand”, he also promoted the well-being of society as a whole. Nations, meanwhile, should concentrate their production on goods in which they had a natural advantage, whilst importing those in which they did not. His work was influenced by the writings of his friend David Hume and the French philosopher François Quesnay, and among his wide circle of friends were the inventor James Watt, the chemist Joseph Black, the historian Edward Gibbon and the writer Samuel Johnson. His theory influenced many, especially the English economists Samuel Ricardo and John Stuart Mill. 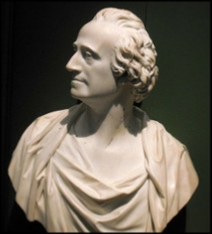 xxxxxThe Scottish economist Adam Smith is generally regarded as the founder of modern economics. In his mammoth work An Inquiry into the nature and causes of the Wealth of Nations, published in 1776, economics came of age as a separate branch of study, divorced from political science and related subjects. His penetrating appraisal into how wealth is produced and distributed still has much relevance today - particularly concerning the definition of capital - and, over the years, has played an important part in influencing those charged with formulating a nation's economic policy.

xxxxxSmith was born in Kirkcaldy, near Edinburgh, and attended both Glasgow and Oxford Universities. Afterwards he became a lecturer on rhetoric at Edinburgh and it was here that he developed a close friendship with the Scottish philosopher David Hume, an association which had a marked effect upon his own economic and ethical thought. He was appointed professor of moral philosophy at Glasgow in 1752, a post he held for eleven years. His ethical teachings here formed the basis of his first major work of 1759, a thought-provoking treatise entitled Theory of Moral Sentiments, 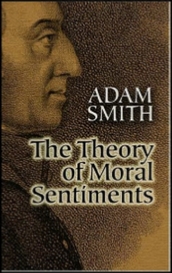 xxxxxIn 1763 he became tutor to Henry Scott, the young duke of Buccleuch, and accompanied him on an 18 month tour of France and Switzerland, a journey which enabled him to meet the leading members of the Physiocratic School. He was particularly impressed by the theories advanced by its leader, the French philosopher François Quesnay. On his return in 1766 he spent the next ten years in his home town or in London, writing up The Wealth of Nations. For the last twelve years of his life he served as commissioner of customs for Scotland and, for a short time, was lord rector of Glasgow University.

xxxxxThe main thrust of his The Wealth of Nations - in accordance with that of the French physiocrats - was that the production and trading in goods and services - be it commercial or industrial - could only be stimulated and thus made more profitable, when they were allowed to take place under strict conditions of free-trade. As the policy of laissez-faire and laissez passe would have it, interference by governments in the form of controls and regulations had to be kept to a minimum or, better still, not imposed at all. The private entrepreneur, he argued, though motivated purely by self interest, was at the same time guided “as by an invisible hand” to promote the well-being of all, even though that was never part of his intention. But this act of individual enterprise had to be left free and unfettered if the entrepreneur were to benefit in full, along with society as a whole.

xxxxxThis theory was related to Smith's definition of national wealth, and ran counter to current thinking. Mercantilism, in vogue since the 16th century, held that the key to a nation's prosperity could be measured by the amount of bullion or treasure it held. It followed that trade needed to be regulated by government subsidies or taxes to ensure that there was a surplus of exports over imports. For Smith, however, national wealth was based on the production of consumable goods, and the labour that produced them. Given this definition, any restriction or interference in free competition could be harmful. This argument, developed in book four, demolished the bullion theory of wealth and laid down the foundations of modern capitalism. 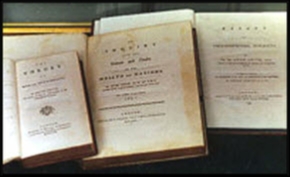 xxxxxIn the matter of international trade, Smith argued that free trade accorded with the principle of natural liberty and produced the maximum amount of produce at the lowest possible price. Countries needed to increase their wealth by exporting those goods in which they had the economic advantage, whilst importing those goods that were produced more cheaply elsewhere. By such means everybody gained. And in the production of manufactured items, he was the first to put forward the economics of the division of labour. Efficiency was to be gained, he suggested, by dividing the manufacturing process into a series of steps, each carried out by a different work force. This not only increased production, but also reduced the level of skill required by each worker. (As we have seen, it was about this time that the English pottery manufacturer Josiah Wedgwood began to introduce such methods in his factory at Etruria). 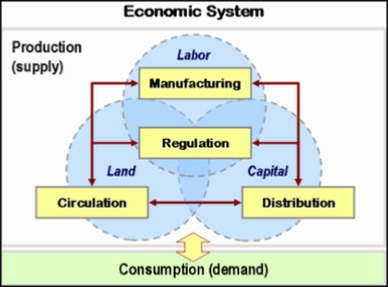 xxxxxThe Wealth of Nations, apart from containing a reasoned vindication of the basic principles of the classical school - such as economic freedom, private enterprise, laissez-faire government, and the value of competition and mass production - also contained a detailed review of how economic systems had worked, developed and changed over the years. It was the first comprehensive attempt to trace the historical development of trade and industry and, as such, made an outstanding contribution to 18th century thought and learning.

xxxxxHeld in high esteem for the depth and quality of his work, Smith ended his career a highly respected and wealthy man. Apart from his close friendship with David Hume, he numbered among his many acquaintances - be they made in Scotland or in London - the chemist Joseph Black, the inventor James Watt, the man-of-letters Samuel Johnson, the political philosopher Edmund Burke, and the historian Edward Gibbon. As one would expect, his comprehensive system of political economy had a major impact on the development of the new science of economics. The Englishmen David Ricardo and John Stuart Mill were particularly influenced by his work.