xxxxxThe Treaty of Limerick which followed the Protestant victory at the Battle of the Boyne in 1690 (W3) was not a harsh settlement, but within a few years the Catholics had lost all their civic rights again and the English government, still in control of Irish affairs, had seriously restricted the island’s trading rights. With the coming of the American War of Independence in 1775, however, the Protestants, supported by their own defence force, the Irish Volunteers, and led by an able lawyer named Henry Grattan, forced the British government to make concessions. Trading restrictions were eased, some anti-Catholic legislation was removed, and the demand for home rule, made in 1780, was partially met by 1782. Nevertheless, catholic emancipation remained a burning issue, and the ultimate control of Ireland still remained in British hands. For some, motivated by the outbreak of the French Revolution in 1789, nothing short of Irish independence was enough. As we shall see, with this in mind a rebellion broke out in 1798 (G3b).

xxxxxAs we have seen, the Treaty of Limerick, which followed the victory of William III over James II at the Battle of the Boyne in 1690 (W3), was not a particularly harsh settlement. Roman Catholics retained a measure of religious freedom and the land they had held under Charles II was restored to them. However, within a short while the Irish parliament had re-enacted the Penal Laws - excluding Catholics from property and positions of authority - and the English parliament had withdrawn the land concessions and placed further, harsher restrictions on trade with Ireland. And still in force were Poynings' Law - the legislation of 1495 that had placed the Irish Parliament under the control of the English king and council. 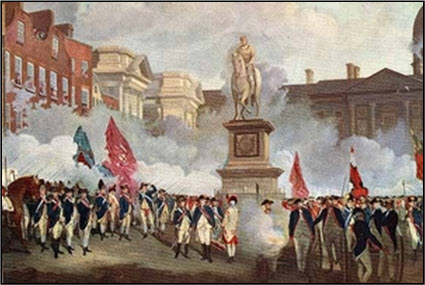 xxxxxThe severe measures introduced against Irish commerce and industry at that time - such as the banning of the export of Irish food stuffs to England, and a total ban on the trade in woolens - led to the steady economic decline of Ireland. These measures angered the Protestants, as did the restraints placed on their law making. It is not surprising, therefore, that the outbreak of the War of American Independence in 1775 should strike a chord in Ireland. It also provided an opportunity for action. Needing all the troops they could muster, the British withdrew their garrison of 4,000 troops from Ireland, and the Dublin government was obliged to raise a force of Protestant volunteers - some 40,000 strong - to protect the coastline from American privateers and a possible French invasion. It escaped no one’s notice that, given the opportunity, this militia could also be used to promote a more pressing cause - greater independence for Ireland! (Illustrated here is a muster of the Irish Volunteers in College Green, Dublin, November 1779.) 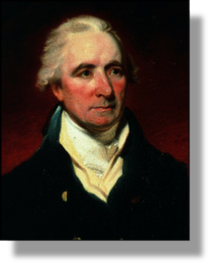 xxxxxThe Irish statesman Henry Grattan (illustrated) was the man who emerged to champion this cause. He was born in Dublin, educated at Trinity College, and became a member of the Irish Parliament in 1775. A brilliant orator, he quickly became the principal leader of the nationalist movement. Discreetly but firmly supported by the Irish Volunteers, lurking in the background, he demanded free trade and, in 1780, legislative independence for Ireland. In fact the British parliament, concerned about the military situation in Ireland, felt it wise to make a favourable response. It repealed significant parts of Poynings’ Law, conceded parliamentary independence, and, by the Catholic Relief Act of 1782, removed much of the anti-Catholic legislation. In addition, it relaxed some of the restrictions on the export of goods. However, catholic emancipation remained a burning issue, and, politically, the executive authority still remained in the hands of the British parliament.

xxxxxThus while the concessions made by the British government in 1782 were quite substantial, they did not go far enough to satisfy ardent patriots like the Irish lawyer Wolfe Tone. For them, the coming of the French Revolution in 1789 made a call to arms inevitable. Societies of United Irishmen were formed in the early 1790s and, opposed by the British, became dedicated to securing complete Irish independence. As we shall see, they were to take up arms in 1798 (G3b). 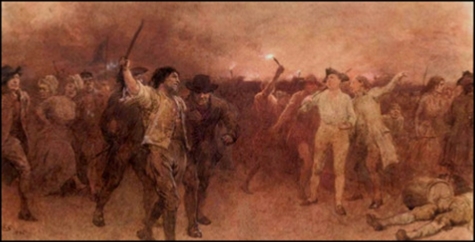 xxxxxMeanwhile in England the concessions granted to Roman Catholics by the Catholic Relief Act of 1778 alarmed and angered Protestants. An unstable, fanatical character by the name of Lord George Gordon (1751-1793), being determined to have the Act repealed, formed the Protestant Association in Scotland and marched on London in June 1780. Here the Gordon Riots, as they came to be called, lasted for eight days, and were supported by some 50,000 people. A vast amount of property was damaged - particularly to Roman Catholic Churches - and more than 300 people were killed amid the violent disturbances. It took something like 10,000 troops to restore law and order. Gordon was charged with high treason, but was acquitted on the grounds that he had had no treasonable intention.

xxxxxIncidentally, Gordon, third son of the Duke of Gordon, was later convicted of libeling the Queen of France and the French ambassador in London. Ironically, in January 1788 he was sentenced to five years’ imprisonment in Newgate, the prison badly damaged during the riots. By all accounts he led such a comfortable life there that, when his five years were up and he could find no one to vouch for his good conduct, he was happy to stay on! He died of typhoid fever that same year. The portrait shows him after his conversion to Judaism in 1787. ……

xxxxx…… The Gordon Riots - and Lord George Gordon - feature prominently in Barnaby Rudge, the first historical novel by the English author Charles Dickens. It was published in serial form as from 1841.