xxxxxThe English inventor Richard Arkwright produced his spinning or water frame in 1769. This produced much stronger thread than the "spinning jenny" invented by James Hargreaves two years earlier, but within a few years his own invention was itself superseded by the "spinning mule", a much advanced piece of equipment devised by Samuel Compton in 1779. Nonetheless, Arkwright made good use of his invention. Threatened by hand-spinners, who saw their jobs in jeopardy, he settled in Nottingham and in 1771 - in partnership with others - he built two factories, one using horse power and the other using waterpower to drive his machines. The factory system had arrived, and along with it, as we shall see, came the formative stage of the Industrial Revolution. 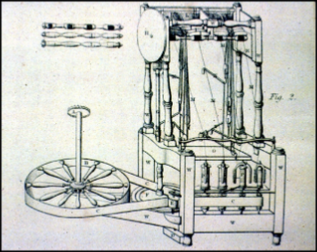 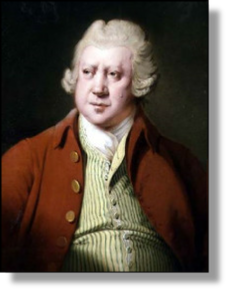 xxxxxThe Englishman Richard Arkwright was born in Preston, Lancashire. He started his working life as a barber's apprentice and then spent a number of years as a travelling wig-maker. He became interested in textile machinery in the early 1760s and it was then that he began constructing his roller spinning machine in his home town. Patented in 1769, it was a marked improvement on the spinning jenny invented by James Hargreaves two years earlier. It produced stronger threads and these could be used as warp in the weaving of cotton cloth. As in the case of Hargreaves, however, the invention incurred the wrath of the local hand spinners, and Arkwright felt obliged to get out of town and settle in Nottingham. (The portrait - a detail only - is by the English artist Joseph Wright of Derby.)

xxxxxBut Arkwright was not merely an inventor. Indeed, by 1779 his spinning frame had been virtually superseded by the "spinning mule", a machine devised by the inventor Samuel Crompton which not only increased output even further, but produced a far superior quality of yarn! Arkwright was also a textile industrialist, and that is where his importance lay. His spinning frame, sometimes known as a "water 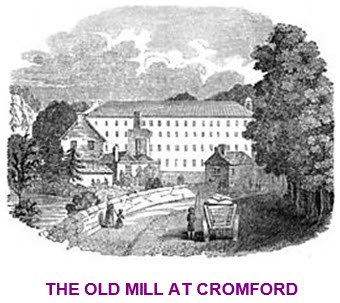 frame", was specifically designed, in fact, to be driven by water power. Having fled from his home town of Preston, in 1771 he opened cotton-spinning factories at Nottingham (where he used horse power) and then Cromford in Derbyshire, where he employed waterpower. And within a few years, in partnership with others, he was running a number of additional factories where all the machinery was worked by water power. By 1783, he and his partners were employing 5000 workers - the majority being children - and mills had been built in Lincolnshire, Lancashire and north of the border. Then in 1790 he introduced a steam-driven engine into his Nottingham mills, a significant step forward. The factory system had arrived, and so had the formative stage of the Industrial Revolution.

xxxxxKnighted in 1786 for his contribution to industry, Arkwright died in 1792 and was buried at Cromford Church, close to the site of his first water-powered mill.