xxxxxAs we have seen, the Dutchman Jan van Riebeeck established the first European settlement at Cape Town, South Africa, in 1652 (CW). Development of the hinterland began five years later, and within a hundred years the Dutch farmers (Boers) had penetrated deep inland at the expense of the indigenous population. In 1779, however, having reached the Great Fish River, they came into conflict with a group of tribes known as the Xhosa. This encounter was but the first of a series of Kaffir or Cape Frontier Wars which was to last for a century. The Boers were better armed, but the Xhosa were far too superior in numbers to make possible any further advance. Indeed, as we shall see, it was not until 1836 (W4) that the Boers finally outflanked their enemy and began their Great Trek in search of a new homeland. In the meantime, the British had taken control of the Cape. They made some gains against the Xhosa in 1811, but it was not until 1879 that these tribes were finally subdued and their lands made part of Cape Colony, though, as we shall see (1852 Va), they were soundly defeated in the war of 1850 to 1853 and never really recovered after that. 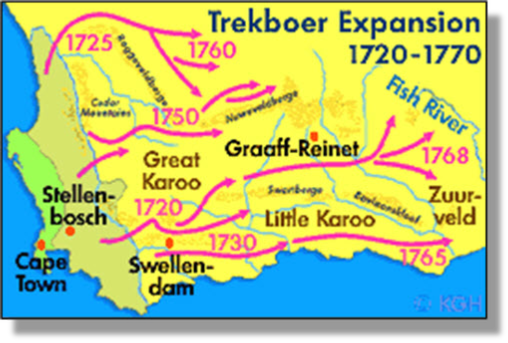 xxxxxAs we have seen, the Dutchman Jan van Riebeeck established the first European settlement at Table Bay (now Cape Town in South Africa) in 1652 (CW). Originally, the fort here was simply intended as a stopover station and a storehouse for the Dutch East India Company, but, inevitably, the settlement began to expand to meet the needs of its people. In 1657 a number of company servants were released from their employment to cultivate land on the company's behalf, and with the arrival of slaves the following year, farms and vineyards were established further inland. 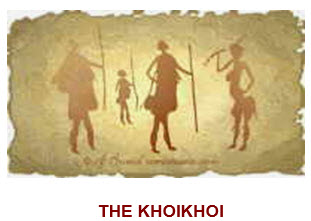 xxxxxThe main need was for livestock and, at first, the cattle were obtained by bartering with the local tribesmen, the Khoikhoi. However, as the white farmers (Boers) moved further north and east, the Khoikhoi, together with the local Bushmen, were pushed out of their lands. Many of their men were killed, and the women and children put to work on the colonial farms. Thus by the 1770s the settlement in South Africa had two distinct regions: the area around the Cape of Good Hope, and the dry lands of the interior, where the trekboers, searching for new pasture, were pushing ever outwards at the expense of the indigenous population.

xxxxxThis advance of the white farmers into land long held by various Bantu-speaking tribes made a clash of arms inevitable, and it began in 1779. In that year the trekboers (illustrated) came into contact and conflict with the Xhosa people (earlier known as Kaffirs), a group of related tribes living in the Eastern Cape Province. The first encounter happened near the Great Fish River, some 450 miles east of Cape Town. Here, several chiefdoms of the Xhosa, migrating 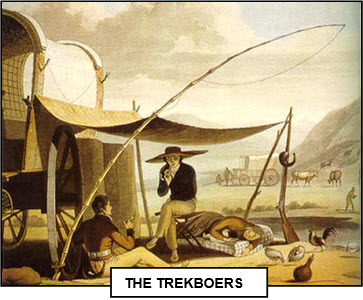 south to find more land for their increasing population, clashed with the Dutch settlers moving north in search of good farmland. It was but the beginning of a long series of Kaffir or Cape Frontier Wars which was to last for a century. These battles put an end to further advance by the trekboers in this area. They had better firearms, and their commando type tactics were sufficient to keep the tribesmen at bay, but the Xhosa were far too superior in numbers to make possible any further advance. As we shall see, it was not until 1836 (W4) that the Boers finally outflanked their enemy and began the Great Trek inland in search of their own homeland.

xxxxxIn the meantime, the second encounter 1789 to 1793 - which again ended in stalemate - was followed by the arrival of the British in 1795. They settled in large numbers and, moving eastwards, like the Boers before them, found themselves in the battle zone running along the lower stretches of the Great Fish Valley. However, they met with some success in the fourth war of 1811, driving the Xhosa from the area known as the Zuurveld. They were then able to settle some 3,500 English-speaking settlers in the region. By the Congress of Vienna of 1815 - which concluded the Napoleonic Wars - the British were given official control of the territory. However, it was more than fifty years before the Xhosa were finally defeated and their lands were made part of Cape Colony, though, as we shall see (1852 Va), they suffered a serious defeat during the war of 1850 to 1853, and never really recovered after that.

xxxxxIncidentally, the fifth war (1818-19) saw the coming of Maqana Nxele, an Xhosa prophet who claimed that he could “make bullets into water”. He led his people in a number of attacks, but was eventually captured and imprisoned on Robben Island, about seven miles off the coast from Cape Town. He drowned in 1820 while trying to escape.

Map (South Africa): contained in the Online Travel Guide of South Africa Travel, source unknown. Khiokhoi: adapted from an original San Rock Painting by the South African/Irish artist Avril Brand, and contained in her South Africa West Coast: The Forgotten People. Trekboers: aquatint by the English artist Samuel Daniell (1775-1811) – contained in African Scenery and Animals, published together with his two brothers, Thomas and William, in 1804.