xxxxxThe reign of Catherine the Great of Russia, an intelligent and powerful leader, saw a substantial increase in the size of the empire. Aided by such able men as her military commander Aleksandr Suvorov, her foreign minister Nikita Panin, and her court favourite Grigory Potemkin, she won two wars against the Ottoman Empire - taking over the Crimea and gaining vital access to the Black Sea and the Mediterranean beyond by the Treaty of Kutchuk-Kainardji in 1774, and then obtaining more land by the Treaty of Jassy in 1792 (G3b). At the same time, by agreement with Austria and Prussia, she gained vast tracts of land from the partitioning of Poland, completed in 1795 (G3b). At home she liked to be seen as an enlightened monarch but, in fact she recognised that her power base lay with the nobility and gentry. She safe-guarded their rights and privileges whilst doing nothing to relieve the plight of the serfs - despite earlier promises. Indeed, because of the Pugachev Rebellion of 1773, and the outbreak of the French Revolution, their lot became progressively worse. In the meantime, reforms at home, notably in the reorganisation of local government, and support for industry, agriculture and trade, helped to continue the modernisation of the country. And as a writer herself, she was particularly friendly with the encyclopedists - such as Diderot and Voltaire - and did much to encourage literature and the visual arts. 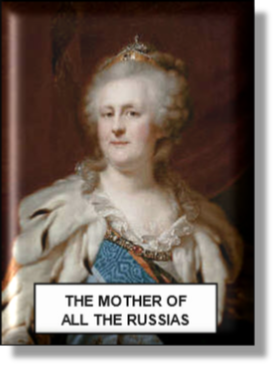 xxxxxCatherine was born Sophie Augusta Fredericka, the daughter of a German prince. She went to Russia at the age of 15 to be married to Peter, heir to the Russian throne. Her husband, an unstable individual, succeeded the Empress Elizabeth in December 1761, but was overthrown by the Imperial Guards and murdered within seven months. It was then that Catherine took over the reins of government. She proved an able, domineering leader, with a lively intelligence and an abundant supply of energy. Under her rule the process of westernisation, begun by Peter the Great, was continued, and the boundaries of the Empire were substantially expanded. In the west, for example, vast areas of land were acquired from the three partitions of Poland, whilst in the south Catherine fulfilled one of Russia's age-long ambitions: control of the northern coast of the Black Sea with its access to warm-water ports and the Mediterranean beyond. 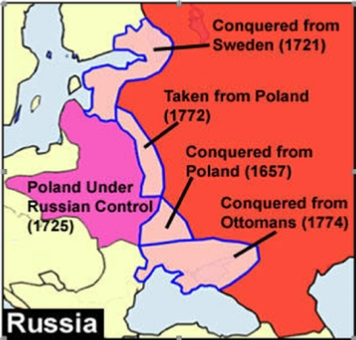 xxxxxThe advance southwards was by means of two successful wars against the Ottoman Empire. In the first one, begun in 1768, the Russians defeated the Turkish fleet at the Battle of Chesme in 1770, captured Azov, and overran Moldavia, Bessarabia and the Crimea. Byxthe Treaty of Kutchuk-Kainardji in 1774, the Russians gained vital access to the Black Sea, the right to represent the Greek Orthodox Church in Turkey, and, for trading purposes, free navigation in Turkish waters. In 1783 Russia annexed the Crimea and this led to the second war, begun by Turkey in 1787. The Turks were again defeated and, as we shall see, by the Treaty of Jassy in 1792 (G3b) they were forced to cede further land bordering the Black Sea. Meanwhile, in the west, the gains were likewise impressive. Here, in connivance with Austria and Prussia, Catherine participated in the three Partitions of Poland (see map), and, as we shall see, by the time of the last partition in 1795 (G3b), had acquired over 180,000 square miles as a result - though much of this territory was to bring problems of control and the need for a harsh regime. 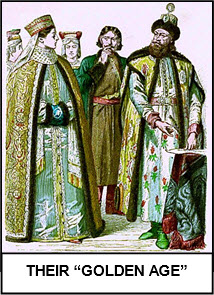 xxxxxAt home, she appeared to welcome the ideas of the Enlightenment, but her liberal views were little more than skin deep. Recognising that the nobility and gentry were the basis of her power, she showered them with privileges, titles, offices of state and the grant of land. It was their “golden age”. In contrast, and despite her promises, she did nothing to ease the plight of the serfs, the vast majority of her people. Indeed, the Pugachev Rebellion of 1773 - a serious peasant revolt - and, later, the threat posed by the outbreak of the French Revolution in 1789, took her headlong down the path of repression. Serfdom was extended to the newly acquired territories, and the powers of the gentry over their serfs were much increased. At the same time she reaffirmed her support for the nobility, guaranteeing their status and rights. 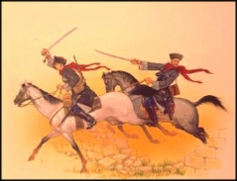 xxxxxHer domestic reforms went some way to modernising the country, huge though it was. A tireless worker in the service of the state, she instigated a new code of laws, reorganised local administration across the land, encouraged the modernisation of industry and agriculture, and did much to promote trade. And for reasons of security, she disbanded the Cossacks and integrated their members into the regular army, a move which, in the long term, strengthened the forces of the crown. 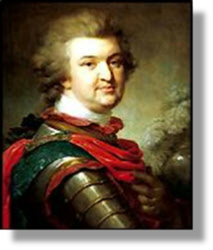 xxxxxAs a ruler she was a good judge of talent, selecting men who became highly capable in their chosen field. Nikita Panin, for example, proved an astute advisor in the conduct of foreign affairs, and Aleksandr Suvorov became her greatest military commander. And in this respect, her private life seems to have played a useful part. She is known to have had numerous love affairs, and whilst her lovers were never allowed to play a dominant role in the affairs of state, she did make use of some of them. Indeed, her special favourite, Grigory Potemkin (1739-1791) (illustrated), made a particularly important contribution to her imperial policy, and at one time was virtually a joint ruler. A soldier and statesman, he helped Catherine to seize power in 1762, and became her most trusted and devoted advisor. He it was who organised the war against Turkey, and built up the Black Sea navy, based on the city and seaport of Sevastopol. And later, he was the man behind the annexation of the Crimea in 1783 and who, four years later, had Catherine go on a triumphal tour - known as “Cleopatra's Fleet” - to take possession of her new provinces. 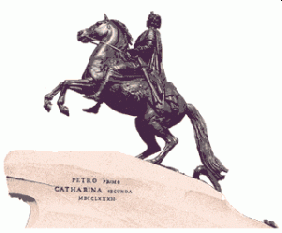 xxxxxCatherine was a well-read woman and, as a patron of arts and letters, she was particularly interested in the French Enlightenment. She admired the encyclopedists d'Alembert and Denis Diderot - who visited her at her court in 1733 - and corresponded with the philosopher and critic Voltaire. She was, herself, a prolific writer, and it was with her support that the Academy of Sciences and the University of Moscow gained a wide reputation as important centres of learning. Among those whom she invited to work in Russia was the Swiss mathematician Leonhard Euler and the French sculptor Étienne Maurice Falconet. It was while Falconet was in Russia in the 1760s and 1770s that he made the colossal bronze equestrian monument to Peter the Great, unveiled in 1782. This statue is now in The Hermitage, the state Museum founded by Catherine in 1764 to house her art collection. One of the most enduring aspects of her social achievements was in education, where she increased the number of state and private schools, and opened up the first Russian establishment for the teaching of girls.

xxxxxThe full extent of Catherine the Great's success as a ruler is not easy to assess, but by the end of her reign a greatly enlarged Russia was certainly playing a much more prominent and influential role in world affairs. In addition, much improvement had been made in the political administration of this vast country, a key factor in the development of Russia into a modern, European state.

xxxxxAnd her long reign also witnessed an enormous growth in urban development, a sure sign of the country's growing prosperity. More than one hundred new towns were built, and many of the old ones were redeveloped and expanded. She may not have achieved all she set out to do, but no one can question or doubt the strength of her determination to make Russia a powerful and prosperous nation,

xxxxxCatherine died unexpectedly of a stroke in November 1796, and was succeeded by her son Paul, whom, in fact, she had planned to disinherit in favour of his eldest son Alexander. Totally unprepared for his new role, Paul I found no favour with the army nor the nobility, and was assassinated in March 1801. His 23 year old son, coming to the Russian throne as Alexander I, was destined to play a prominent part in European affairs during an eventful reign of twenty-five years. 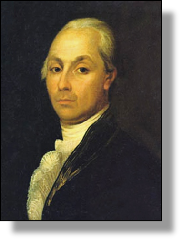 xxxxxIncidentally, Catherine’s repressive measures following the outbreak of the French Revolution in 1789 were made the more drastic by the private publication of Journey from St. Petersburg to Moscow in 1790, a book which contained a bitter attack upon the abuses of her government and the evils of serfdom. Not surprisingly, the Russian author, Aleksandre Radishchev (1749-1802) (illustrated), was exiled to Siberia. He was pardoned in 1801 at the accession of Alexander I, but, dismayed at the extent of social injustice still existing, committed suicide the following year.