xxxxxThe Maratha state was founded by Shivaji in 1674. With the death of Aurangzeb in 1707 and the decline of the Mughal Empire, the Maratha slowly gained control of much of central and northern India. Meanwhile, however, as we have seen, following the death of the Iranian leader Nadir Shah in 1747 (G2), his chief bodyguard, Ahmad Shah Durrani, was elected king of Afghanistan and led attacks into northern India. In 1761 he met up with the Maratha army and destroyed it at the Battle of Panipat. This shattered their dream of succeeding the Mughals as rulers of India but, as we shall see, in 1775 they met with some success in the first of the Anglo-Maratha Wars. As for Durrani, an outstanding fighter and administrator, he failed to subdue the Sikhs and returned to Afghanistan, where he died in 1772. 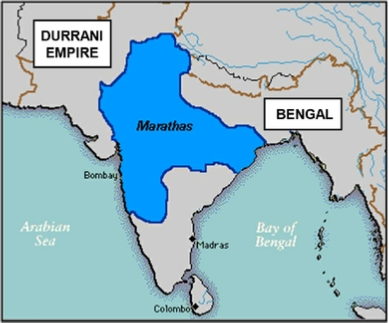 xxxxxAurangzeb, the last of the great Mughal emperors, expanded his control over most of the Indian sub-continent, but attempts in the 1660s to extend his power further south into the Deccan met with limited success. Here, he was strongly opposed by the Maratha, later founded as an independent Hindu state by its able leader Shivaji in 1674. As a result, following the death of Aurangzeb in 1707, and the decline of the Mughal Empire, the Maratha slowly advanced their authority into central and northern India by forming a loose but powerful confederacy of independent families. By the 1750s their influence extended from Mysore in the south to Agra in the north. Meanwhile in the north, the Mughal Empire, coming under constant attack from Persia, was virtually brought to its knees by the Persian leader Nadir Shah. He attacked and plundered Delhi in 1739, but made no attempt to extend his rule there. 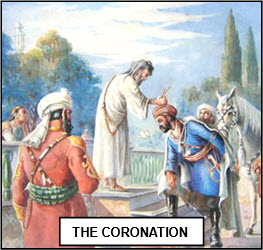 xxxxxAs we have seen, following the death of Nadir Shah in 1747 (G2), the commander of his Afghan bodyguard was crowned king of Afghanistan with the title of Ahmad Shah Durrani (1722-1772) (illustrated). Like his late master, he invaded India on a number of occasions, plundering Delhi in 1757. His main aim was to establish a trade route across northern India, but this involved him in a series of wars and the need to control - albeit loosely - a vast stretch of territory covering Kashmir, Sind and the western Punjab. Some of his fiercest fighting was with the Marathas, and at one time it looked as though they would gain the upper hand. However, unfortunately for them, the people of northern India, even the Hindus, regarded them as plunders rather then allies. They gave them little support. So it was that, in January 1761, at the town of Panipat, 75 miles north of Delhi, a Maratha force of some 80,000 strong under their leader Bhao Sahib, was trapped and virtually destroyed by an Afghan army of similar size, led by their legendary leader Ahmad Shah Durrani.

xxxxxFor the Marathas, their defeat at Panipat shattered the hopes they had of succeeding the Mughals as rulers of India, (though, as we shall see, in 1775 they were still a force to be reckoned with in the first of the Anglo-Maratha Wars). Nor did the victors fare any better. In the 1760s Ahmad Shah Durrani failed to crush his other great rival in north-west India, the Sikhs, despite four campaigns against them, and he was eventually forced to leave the Punjab under their control. Then, with his death in 1772, the Afghan empire began to disintegrate and, like the Marathas, came up against the imperial designs of the British and - in its case - the Russians. As we shall see, the British were to make a number of attempts to extend their control over Afghanistan in the 19th century. 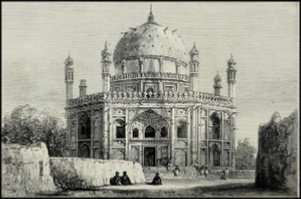 xxxxxAhmad Shah Durrani, founder of the Afghan nation and victor of the Battle of Panipat, was one of history's outstanding leaders. He fought like a soldier and he ruled like a statesman. As an administrator he was well ahead of his time. He governed with the help of a prime minister and a council of nine chiefs, each one responsible for his own particular tribe. He was himself a poet, and his poetry shows a great love for his native Afghanistan. He died in 1772 and was buried in an imposing mausoleum in Kandahar. Next to this building is the mosque of the “Khirqah”, said to contain the cloak of the prophet Muhammed.

xxxxxThe following is part of a poem Ahmad Shah Durrani wrote on the love he had for his country:

By blood we are immersed in love of you

The youth lose their heads for your sake.

I come to you and my heart finds rest

Away from you, grief clings to my heart like a snake,

I forget the throne of Delhi

When I remember the mountain tops of my Pushtun land,

If I must choose between the world and you,

I shall not hesitate to claim your barren deserts as my own.

xxxxxIncidentally, there were three Battles of Panipat. In 1526 the Mongol leader Babur defeated the emperor of Delhi and founded the Mughal Empire in India. Thirty years later, a large Hindu army which had captured Delhi was overthrown by the Mughals, thus confirming Akbar as the Emperor.