xxxxxThe Scottish engineer James Watt was trained as a mathematical instrument maker, and also spent some years as a canal surveyor. In 1775, however, he went into partnership with Matthew Boulton, a local industrialist, and began work on improving the pumping machine invented by the English engineer Thomas Newcomen in 1712 (AN). He quickly improved its economy and efficiency by isolating the condenser and insulating the cylinder. It was not until the early 1780s, however, that he made two revolutionary improvements. By 1782 he had made the engine "double-acting" (whereby the piston pushed as well as pulled) and, by means of special gearing, he had converted this movement into the rotary movement of a wheel. This meant that steam power was now readily available as a driving force for a whole variety of industries. No longer dependent upon water power, they could now establish factories near to two vital needs - coal and a ready labour force. The factory system was about to put the Industrial Revolution into its second and very active phase. 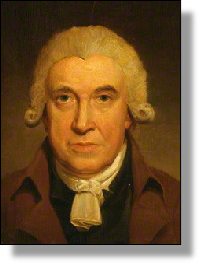 xxxxxAs we have seen, it was in 1712 (AN) that the English engineer Thomas Newcomen produced his steam engine. Although somewhat crude and unreliable, it was eventually used to pump water out of mines across the country, especially in Cornwall. Several years later the Yorkshireman John Smeaton almost doubled the efficiency of the engine, and by 1755 it was being exported to North America. It was left to the Scottish engineer James Watt, however, by a series of inventions, to turn Newcomen's engine into a highly efficient, industrial machine, and start the Age of Steam.

xxxxxWatt was born at Greenock, where his father, a local magistrate, had quite a thriving business building houses and ships. He was trained as a mathematical instrument maker from the age of 17, and in 1757, at the age of 21, he opened a small workshop in Glasgow University. It was during this period that he was asked to repair a Newcomen engine, and he conjured up some ideas on how it might be improved. In 1766, however, he took up work as a canal surveyor, and for the next eight years spent much of his time in Scotland. Nevertheless in 1769 he took out a patent for "A New Invented Method of Lessening the Consumption of Steam and Fuel in Fire Engines." 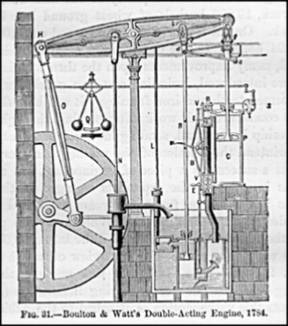 xxxxxItXwas not really until 1775 that, having settled in Birmingham, he turned a practical hand to manufacturing engines. In that year he went into partnership with Matthew Boulton (1728-1809) a local industrialist of proven technical ability who was anxious to adapt steam power for factory production. Watt worked at Boulton's Soho Foundry near Birmingham, and soon made some radical and highly beneficial changes to Newcomen's basic design. For a start, he greatly increased economy by incorporating a separate, water-cooled condenser, thus avoiding the serious loss of steam that occurred with the constant heating and cooling of the cylinder. And he also substantially improved efficiency by insulating the cylinder itself, thereby keeping it at steam temperature.

xxxxxFor the next five years or so Watt was busy installing his much improved version of the Newcomen model in tin and copper mines in Cornwall. During this time, however, he continued his refinement of the engine, and by 1782 had come up with two highly significant improvements. Firstly, by admitting steam to both ends of the cylinder so that the piston was pushed as well as pulled, he had produced a "double acting engine", as in modern machines. Secondly, by means of mechanical attachments - collectively known as "sun-and-planet gearing" - he had converted this back and forth action into the rotary movement of a wheel. The effect of this innovation on industry would be difficult to 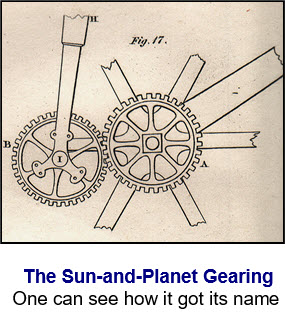 exaggerate. In the short-term, it replaced waterpower with steam power in the cotton and woollen mills operating in the north. In the long term, it meant that a wide variety of factories - such as flour mills, paper mills, iron mills and distilleries - could now be mechanised and built near to coal mines for the source of their power, and close to large towns for the source of their labour force. Indeed, in 1782 the master potter Josiah Wedgwood became the first manufacturer to install a steam-powered engine in his plant at Etruria. The factory system had arrived, and destined to grow at an alarming rate. Furthermore, this rotative engine could be employed in canals, waterworks and the like. The Industrial Revolution was about to move into its second phase. It is estimated that by the turn of the century Watt and Boulton had built some 300 of these engines.

xxxxxNotxsurprisingly, by 1790 Watt was a wealthy man, and honoured for his achievements. Hexand Boulton were elected fellows of the Royal Society in 1785, and both were prominent members of the Birmingham Lunar Society, so named because it met monthly at the full moon. This highly influential organisation was formed in 1766 to promote science and industry, and included among its members the chemist Joseph Priestly, the pottery manufacturer Josiah Wedgwood, and the physician and poet Erasmus Darwin. Watt went into semi-retirement in 1790, but in 1802, following the signing of the Peace of Amiens, he and his wife travelled in France and Germany.

xxxxxIncidentally, it was Watt who first used the term "horse power" as a measure of power. He employed it to compare the power of the steam engine with that of a horse, though, in fact, he exaggerated the pulling power of the horse by some 50 percent. The unit of electrical power - which is linked to horsepower - was named after him.

xxxxxThe English ironmaster John Wilkinson (1728-1808) played an essential part in the making of Watt's ultimate engine. In 1774 he had produced a highly efficient machine for boring the barrels of cannons. This was adapted to assist Watt in the making of his much improved cylinder. As Watt's design for this vital part required a high degree of precision work it could not have been produced, in fact, without Wilkinson's extraordinary piece of tool machinery. As we shall see, machine tools of this kind of quality were later to be developed by such British precision engineers as Henry Maudslay, James Nasmyth and Joseph Whitworth. Wilkinson also designed a furnace with enabled pig iron to be re-melted - thus enabling foundries to be built away from production sites - and it was at his works at Broseley, Shropshire, that he produced castings for the iron bridge built by Abraham Darby in 1779, and pipework and fittings for the Paris waterworks. He was also the first engineer to make an iron-hulled barge, considered necessary to transport the heavy military equipment he was making for the government. 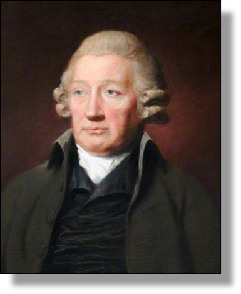 xxxxxThe Englishman John Wilkinson (1728-1808), known at large as "the great Staffordshire ironmaster", played an essential part in the making of Watt's ultimate engine - a fact not always recognised. In 1774, working at his father's factory at Bersham, Denbigh, in Wales, he produced a highly efficient machine for boring the barrels of cannons (illustrated below). Regarded today as one of the first examples of a machine tool, this was adapted to assist Watt in the making of his much improved cylinder. As Watt's design for this valuable part required a high degree of precision work, it could not have been produced, in fact, without the use of Wilkinson's extraordinary piece of tool machinery. Watt's revolutionary engine of the 1780s, which, via its boost to the factory system, accelerated the Industrial Revolution, would certainly not have made its appearance so early in the day had Wilkinson not been around at the time! As we shall see, machine tools of this kind of quality were later to be developed by such British precision engineers as Henry Maudslay, James Nasmyth and Joseph Whitworth.

xxxxxHaving played so vital a role in its production, Wilkinson used the first steam engine built by Watt to drive a large air pump at his blast furnace at Broseley, Shropshire. He specially designed this furnace to re-melt pig iron, an invention which meant that foundries need not be established close to the production site. And it was from here that he supplied many of the castings used in the construction of the first iron bridge, built by Abraham Darby III in 1779. In later years he made all the pipework and fittings for the Paris waterworks, and was responsible for the building of a revolutionary iron-hulled barge, which he used to transport the heavy military equipment he was making for the government. And, ironically, he also taught the French how to bore cannon from solid castings!

xxxxxIncidentally, Wilkinson took his skills as an ironmaster with him to the grave. He was buried in a cast-iron coffin, made to his own design! …..

xxxxx…… The portrait of Wilkinson (illustrated above) was the work of the English painter Lemuel Francis Abbott, an artist especially remembered for his portraits of Lord Nelson. …… 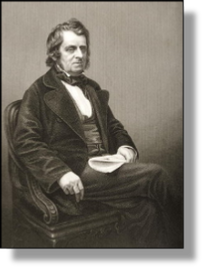 xxxxx…… Andxanother ironmaster who assisted Watt was the inventor John Roebuck (1718-1794). He was in partnership with the Scottish engineer for a short time during the 1770s, when he was working on his improved version of the Newcomen model. Today, however, Roebuck is mostly remembered for inventing the means of manufacturing sulphuric acid on an industrial scale - introduced around 1746 - and for the various improvements he made at his ironworks at Carron in Stirlingshire, during the 1760s, including the conversion of cast iron into malleable iron by means of “a hollow pit-coal fire”.