THE AMERICAN WAR OF INDEPENDENCE

xxxxxIt was the British Stamp Act, a tax imposed on the North American colonies in 1765, that sparked off the American War of Independence. Outbreaks of violence were followed by the so-called Boston Massacre of 1770, and the famous Boston Tea Party of 1773. When attempts at conciliation, made by the First Continental Congress, ended in failure, war broke out in 1775 with the Battles of Lexington, Concord and Bunker Hill. In these engagements the rebel militia acquitted themselves well, and these were followed by Washington's capture of Boston in 1776. But the American Declaration of Independence, written that year, proved somewhat premature. After this, Washington lost the Battle of Long Island, was driven out of New York, and then forced to retreat south across New Jersey and into Pennsylvania. Here, by two daring attacks, he gained victories against crown forces, but in 1777, after defeats at Brandywine and Germantown, he took a weary and depleted army to winter quarters at Valley Forge. In the north, however, a British army, moving south from Canada, was forced to surrender after the Battles of Saratoga in October 1777, and this changed the course of the war. France entered the conflict in favour of the colonists in 1778, followed later by Spain and the Netherlands. The British, after some success in the south - notably at the Battle of Camden in 1780 - moved their forces to New York and Yorktown. And it was at Yorktown in October 1781 that 8,000 troops, surrounded on land by American and French forces, and besieged at sea by a French naval squadron, were forced to surrender. The war dragged on for another two years, but with the surrender at Yorktown, the land war was virtually over. 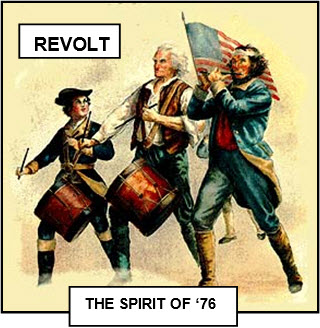 xxxxxAs we have seen, it was the Stamp Act of 1775 - imposed by the British government to help pay for colonial defence - that sparked off a violent dispute between the American colonies and the mother country. The colonists opposed the levy on the grounds that there could be no taxation without representation. Although the act was quickly repealed, other "external" duties were introduced in 1767, and further outbreaks of violence led to the so-called Boston Massacre of 1770. As a result, all the duties were removed save that on tea, and that tax, as we all know, resulted in the famous Boston Tea Party of 1773.

xxxxxThese events clearly kindled a spark of rebellion, but up to this time there had been no widespread demand for independence within the colonies and certainly no unity between them. The general feeling was that some form of compromise could be reached. However, the Intolerable Acts imposed by the British government as a result of the Boston Tea Party - which it regarded as a flagrant act of defiance - changed all that. These harsh measures, which included the closure of the port of Boston, stirred up an unprecedented feeling of indignation and resentment. All but one of the states sent representatives to the First Continental Congress at Philadelphia in 1774. Still the mood was for compromise, but when their Declaration of Rights and Grievances, sent to parliament and the king, was rejected out of hand, it sounded a call to arms. By the time the Second Congress met in May 1775 the first shots had already been fired.

xxxxxThe opening engagement of the war, the Battle of Lexington in April 1775, was hardly more than a skirmish on a village green. The Battle of Concord that followed, however, involved a fierce fight for possession of the Old North Bridge, and a serious loss of 273 men as the British marched their way back to Boston. This encounter gave heart to the colonist militia - a ragged bunch of irregular fighters - and they gained even greater comfort two months later at the Battle of Bunker Hill. Here they were eventually driven from Breed's Hill, but only after inflicting heavy loses - well over 1,000 - upon the government forces.

xxxxxIt was at this juncture, June 1775, that George Washington was appointed commander of the Continental armies. He faced a daunting task. He was seriously short of experienced soldiers, lacked military equipment, and was answerable to a Continental Congress made up of thirteen disparate colonies, each anxious to retain its independence and have its own say. In the north, an attempt to capture Quebec and gain the support of the Canadians failed in December, but his own campaign 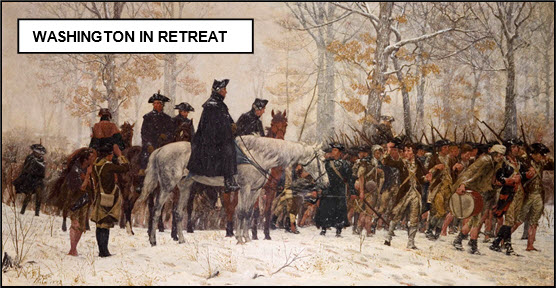 opened on a highly successful note. Having seized the Dorchester Heights overlooking Boston, he had cannon brought south from Fort Ticonderoga, and in March 1776 forced the British to evacuate the city. But soon after this impressive capture of Boston, the Declaration of Independence, made in July 1776, proved somewhat premature. Washington moved his army to New York, but was severely defeated by a large British force at the battle of Long Island in the August of 1776. He was then forced out of Manhattan, trounced at Chatterton Hill, White Plains, and chased across New Jersey into the state of Pennsylvania. With numbers depleted by desertion, shortage of supplies, and the enemy at his heels, Washington's chances of survival appeared slim.

xxxxxIn December 1776, however, the British, as was the custom, went into winter quarters and Washington seized his chance. In a daring raid, he re-crossed the Delaware River on the night of 25th December and surprised and overwhelmed the Hessian garrison at Trenton. Then in the New Year he beat a British force at the Battle of Princeton. These two victories rallied much needed support, but his army met with further reversals later in the year, including defeats at Brandywine in the September and Germantown in the October. And by then royalist forces had taken Philadelphia. However, when his army eventually limped into winter quarters at Valley Forge, news was coming in of a resounding victory 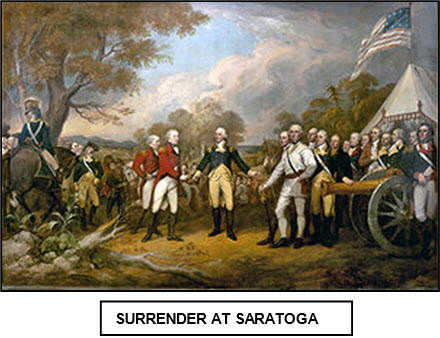 over the British in the north, at the Battles of Saratoga in October 1777. Earlier in the year, a large force under General Burgoyne had moved south from Canada and reached and captured Fort Tinconderoga in the July. From then onwards, however, the army had come under constant guerrilla attack and, after being roundly defeated at two battles near Saratoga, had been forced to surrender. It was a patriot victory which, for the colonies, proved the turning point of the war. On the strength of it, the French came out officially in support of the colonists in 1778, and over the next two years the Spanish and the Dutch followed suit. A civil war had turned into an international conflict.

xxxxxIn response, the British pulled out of Philadelphia and made their way to New York, harassed by Washington on their way and badly mauled at the Battle of Monmouth. Once they were garrisoned in New York, Washington stationed his army at nearby White Plains. Further south, however, the forces of the crown went on the offensive, taking Georgia, capturing Charlestown, and gaining an impressive victory at Camden, South Carolina, in August 1780.

xxxxxBut even here, the rebels' use of guerrilla tactics proved highly successful, resulting in the rout of 1,000 Redcoats on King's Mountain, and success at the Battle of Cowpens early in the New Year. Then in the Spring of 1781 the British commander, General Cornwallis, decided to withdraw his army to Yorktown on the Virginian coast where he could receive reinforcements. Given the strength of the French navy, it was to prove a disastrous decision. 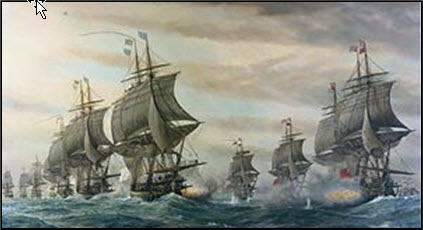 xxxxxIndeed, the war at sea played an important part in the colonies' final victory. As early as 1775 the American continental navy, small though it was, had begun to carry out a successful campaign against British shipping, not only in North American waters but also around the shores of the British Isles. By 1779, for example, the exploits of the American captain John Paul Jones in British home waters had become legendary. But it was the entry of France into the conflict which turned the tide. This not only opened the possibility of an invasion of Great Britain itself, but threatened the home country's vital lifeline to their troops in North America. And this threat became a reality when a large French naval force, having won the Battle of Virginia Capes in September 1781 (illustrated), blockaded the port of Yorktown and put an end to any hopes of reinforcements for the 8,000-strong British garrison. Washington, seizing this opportunity, swiftly moved his army and a large French force to the outskirts of Yorktown and laid siege to the city. The crown forces, surrounded and outnumbered, stood no chance, and Cornwallis surrendered in October 1781. As far as the land fighting was concerned, the War of American Independence was over, lost by the British and won by the Americans and their new nation in the making.

xxxxxThe loss of the American colonies was humiliating for both the British government and the British monarchy. Through a heavy-handed policy of intransigence they achieved the almost impossible on two counts - firstly, the uniting of thirteen disparate and fiercely independent colonies, and secondly, the victory of these colonies over the armed might of the mother country. In the aftermath of the Seven Years' War, the colonies still needed to be defended against Indian and Spanish hostility. In these circumstances a moderate policy of taxation within the colonies seemed reasonable enough to the British. But in their unimaginative handling of this policy, they attempted too much too quickly. Herein lay the root cause of the conflict. Having only recently become a colonial power of some consequence, the British government and King George himself simply failed to realise that their politically sophisticated subjects in North America, now much freer to shape their own future, pointed to the need for a fundamental reappraisal of the relationship between the colonists and their mother country. When they came to realise this in April 1778, and offered to negotiate, it was too late. 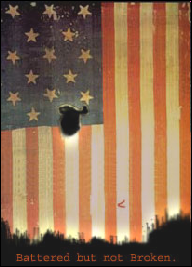 xxxxxOn the military front, the forces of the crown, well trained and disciplined though they were, found themselves fighting in unfamiliar surroundings against an enemy that knew the terrain, used that knowledge to advantage, and, as the conflict progressed, became inspired by their patriotic cause. And to this must be added the quality of leadership on the rebel side - notably that of Generals Washington and Greene. The British commanders were competent by the European standards of the day, but not one of them proved fully equal to the change required in fighting tactics. As a result, battles were lost, and none more significant than the Battles of Saratoga in 1777. So successful were the rebels here - capturing an entire army - that France was persuaded to support the colonists and take up arms against their old enemy. This proved a turning point in the war. When the British eventually sought a rear-guard action at Yorktown, it was a French army that supported Washington, and a French naval squadron that besieged the port, putting an end to their hopes of survival.

xxxxxBut having won the war, the Americans now had to win the peace. As we shall see (G3b), the task of uniting the new nation was to prove a difficult one.

An Outline of the War

AN OUTLINE OF THE AMERICAN STRUGGLE FOR INDEPENDENCE

Events Leading Up to the War

The War - See map below 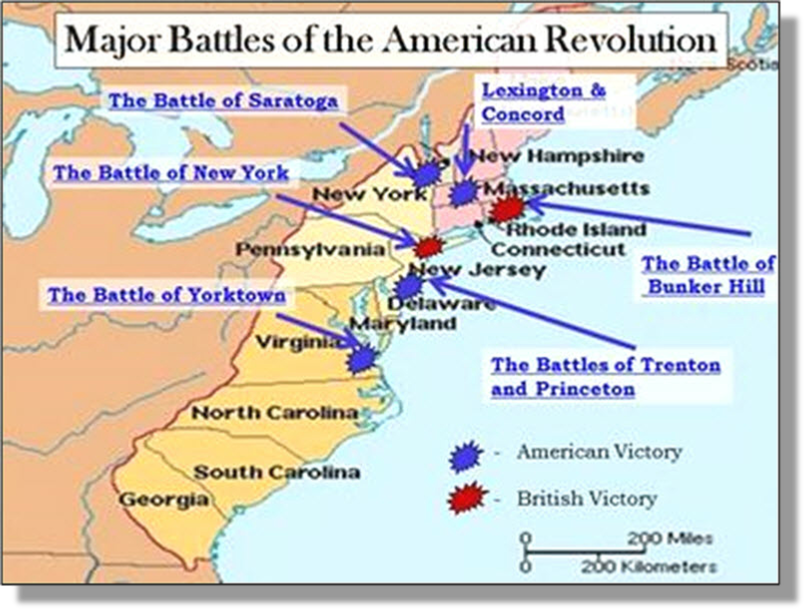