UPRISING LED BY THE PERUVIAN PATRIOT

xxxxxIn 1780 a Peruvian Indian claiming to be descended from the last Inca chief - executed in 1572 (L1) - took on the title Tupac Amaru II, and led a rebellion against Spanish rule. He was captured and beheaded the following year, and the revolt was ruthlessly crushed. Independence was eventually obtained in 1824 (G4), due to the intervention of the foreign revolutionaries José de San Martin and Simon Bolivar. 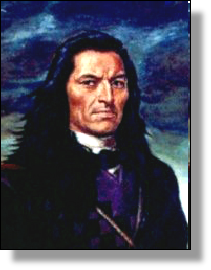 xxxxxAs we have seen, with the capture and public execution of Tupac Amaru in 1572 (L1), the last emperor of the Inca royal line, the Spanish conquest of the Inca Empire was complete. In 1780, however, a Peruvian Indian named Jose Gabriel Condorcanqui, claiming to be descended from the last of the Inca chieftains, assumed the title Tupac Amaru II, and led a revolt against Spanish rule.

xxxxxThe rebellion began when Condorcanqui, an hereditary chief, arrested the provincial administrator in the Tinta region of southern Peru, and had him executed on a charge of treason. This sparked off a general uprising against the Spanish exploitation of the Indian people. At first it proved highly successful. Some 60,000 Indians, aided in the beginning by a large number of Creoles (Spaniards who were born in South America), put the Spanish forces on the defensive across the whole of southern Peru and in parts of Bolivia and Argentina. By the following year, however, the Spanish superiority in weapons began to tell, and eventually the rebellion was ruthlessly crushed. Condorcanqui was captured and, after being forced to witness the murder of his wife and sons, was brutally tortured and beheaded. Over the next two years, thousands of his followers were captured and executed. Nonetheless, this uprising, the first large-scale rebellion in South America, marked the beginning of a growing movement to overthrow Spanish colonial rule. 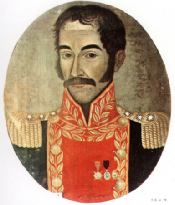 xxxxxIn 1814 another revolt was put down with equal ferocity. As we shall see, when independence finally came in 1824 (G4), it was due to outside intervention, first by the Argentine general and patriot José de San Martin, and then by the Venezuelan revolutionary leader Simon Bolivar (illustrated).

xxxxxIncidentally, in 1781, during the uprising led by Tupac Amaru II in Peru, a revolt was also ruthlessly crushed in New Granada.