xxxxxThe English chemist Joseph Priestley is accredited with the discovery of oxygen in 1774, though the Swede Carl Scheele may well have found it earlier and not made his findings known. His interest in science was aroused during a meeting with the scientist Benjamin Franklin. He first carried out research in optics and electricity, but then turned to chemistry, isolating and describing nine other new gases. In 1774 he met the French chemist Lavoisier, and four years later joined the Lunar Club in Birmingham, getting to know the engineers James Watt and Matthew Boulton, and the pottery manufacturer Josiah Wedgwood. Priestley was, in fact, a non-conformist minister and had strong views on religious and political matters. He spoke out strongly against the corruption in the Roman Catholic Church, and became a champion for the rights and liberties of the American colonists. In 1791, however, he went too far by coming out in favour of the French Revolution. His house was attacked, and much of his equipment and many of his books were destroyed. He moved to London, but, fearing for his life, he eventually emigrated to America in 1794, where he was well received. 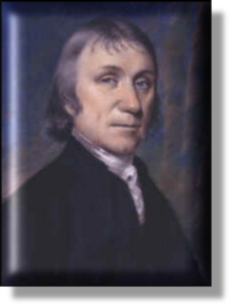 xxxxxIt is more than likely that it was the Swedish chemist Carl Scheele who, in 1772, became the first person to identify oxygen, but, apparently he did not publish his results. As a consequence the discovery was accredited to the English chemist Joseph Priestley when he made known his findings two years later in 1774. He described oxygen's role in respiration and combustion, but as he was an adherent of the theory that any substance which was capable of catching fire contained "phlogiston" (Greek for "flammable") he called his discovery "dephlogisticated air". Fortunately the idea was later discredited, and we were spared the name! The French chemist Lavoisier disproved the phlogiston theory and came up with the term oxygen.

xxxxxPriestley was born at Birstall Fieldhead near Leeds, the son of a Calvinist minister. He was educated at Daventry Academy, Northamptonshire, and then trained as a nonconformist minister. In 1758 he opened a small day school at Nantwick in Cheshire, where he developed his ideas on education, and then three years later became a tutor at the dissenting Warrington Academy in Lancashire. Here in 1765 he published his Liberal Education for Civil and Active Life, a refreshing work in which he stressed the importance of science and other practical subjects for students wanting to enter industry and commerce. 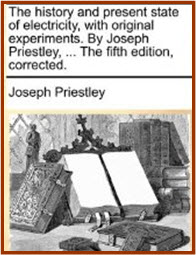 xxxxxHis involvement in scientific matters, particularly in the new branch of electricity, came about following his meeting (and consequent friendship) with the American statesman and scientist Benjamin Franklin in 1766. It is doubtless for this reason that in his early scientific work he showed an interest in physics. He made a particular study of optics, and in 1767, encouraged by Franklin, he published The History and present state of electricity. It was in this year, however, that he was appointed minister of Mill Hill Chapel in Leeds and began his research into "airs". Apart from oxygen, he isolated and described nine other new gases, including nitrous oxide, sulfur oxide, carbon monoxide and ammonia.

xxxxxIn 1772 he took up an appointment as librarian and tutorial advisor to Lord Shelburne, and it was while in his service that he visited France and made the acquaintance of the French chemist Antoine Lavoisier in October 1774. It was this meeting that prompted the Frenchman to investigate further the properties of what he later called "oxygen". In 1780 Priestly left his job with Lord Shelburne - possibly over religious differences - and became a minister in Birmingham. Here, as a member of the Lunar Society, he mixed with the major inventors and scientists of the day, including the engineers James Watt and Matthew Boulton, and the pottery manufacturer Josiah Wedgwood. 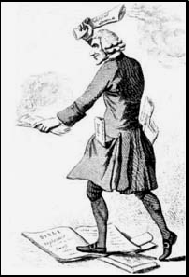 xxxxxPriestley is best remembered today as one of the founders of modern chemistry, but his interests were by no means confined to matters of science. A "furious freethinker" with passionate liberal beliefs, he made sure his sentiments were heard on both political and religious matters. In earlier works, notably his The First Principles of Government of 1768, and The State of Public Liberty in General and of American Affairs in Particular, published in 1774, he attacked the government for depriving the American colonies of their rights and liberties. A state's task, he declared, was to ensure the "good and happiness" of the majority of its members, a turn of phrase which the English economist Jeremy Bentham openly acknowledged inspired his famous "the greatest happiness of the greatest number".

xxxxxAs one would expect, these ideas did not go down too well in a number of official quarters and nor, for that matter, did his religious opinions. By this time he had become even more radical in his views and turned to Unitarianism - a movement which rejected the Trinity, and called for a return to the simple faith of Christ and his apostles. His History of the Corruptions of Christianity, produced in 1782, strongly attacked the Roman Catholic Church, and was burned in the Netherlands by the public hangman in 1785. 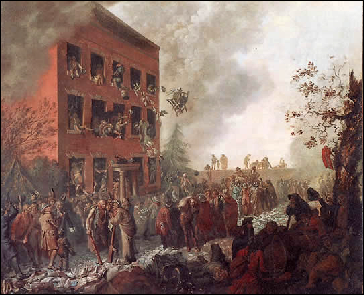 xxxxxThe final straw came in 1791 with a pamphlet defending the French Revolution - in his eyes a movement for universal peace -, and a plea for the rights of man in his A Political Dialogue on the General Principles of Government. In that same year a mob broke into his house and destroyed most of his books, papers and scientific equipment (illustrated). He fled to London and taught there for a while, but, fearing for his life, he emigrated to the United States in 1794 and settled in Pennsylvania. He was well received in America, where he was understandably regarded as a champion of both political and religious freedom, but opposition to him lingered on in England. The journalist William Cobbett (of Rural Rides fame), then living in the United States, regarded him as a traitor, and said so in his pamphlet entitled Observations on the Emigration of Joseph Priestley.

xxxxxIncidentally, Priestley also earned the title "the father of the soft-drink industry"! Apparently, because of his work on optics, he was invited to join James Cook's second voyage to the South Seas in 1772. He eventually declined, but in order to make the drinking water on board more palatable, he suggested that use should be made of his method of "impregnating water with fixed-air (carbon dioxide)". This began a European craze - and an industry - for what came to be called "soda water"! ......

xxxxx...... And Priestley was also the Englishman who gave rubber its name in 1770. The French, with a little more je ne sais quoi, called the substance caoutchouc, a lovely Indian-American word meaning "the wood that weeps". Priestly discovered that by rubbing it on paper one could erase pencil marks so, scientist that he was, he named it accordingly!

xxxxxIt was the Scottish chemist and physician Joseph Black (1738-99) who in 1756 discovered the "carbon dioxide" used by Priestley. He also discovered the bicarbonates, and his research into latent and specific heat not only assisted the Scottish engineer James Watt - working to improve Newcomen's atmospheric steam engine - but also paved the way for the caloric theory of heat expounded by the French chemist Antoine Lavoisier. By his research, Black showed the value of quantitative experiments. 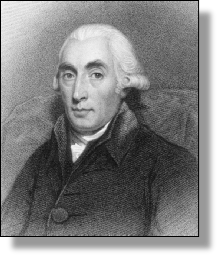 XxxxxThe “carbon dioxide” used by Priestley to make his soda water was discovered by the Scottish chemist and physician Joseph Black (1738-1799) in 1756. Obtained by the decomposition of chalk and limestone, it was he who gave it the name “fixed air”. He also discovered the bicarbonates, and put forward the basic ideas of latent and specific heat.

xxxxxBlack studied at Belfast and Glasgow, and completed his medical training at Edinburgh. He became professor of chemistry at Glasgow University in 1756 and, ten years later, took the same chair at Edinburgh. By his investigation of latent and specific heat in the early 1760s he assisted the work of his friend, the Scottish engineer James Watt - then working to improve the Newcomen pumping engine (see illustration below) - and paved the way for the caloric theory of heat, later expounded by the French chemist Antoine Lavoisier. 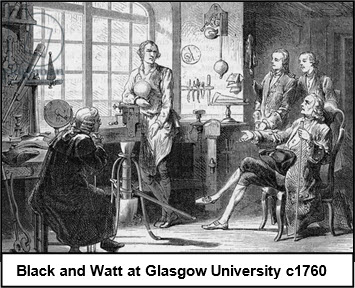 xxxxxA detailed account of his research concerning the isolation and chemical activity of carbon dioxide was published in 1756 under the title Experiments Upon Magnesia Alba, Quicklime, and Some Other Alcaline Substance. His findings went some way to disproving the phlogiston theory of combustion - that all flammable material contained a substance called “phlogiston” - though Priestley, we are told, clung to it until his death. Black's significant contribution to the study of chemistry did much to demonstrate the value of quantitative experiments. His notes were later collated and published in 1803 as Lectures on the Elements of Chemistry.

xxxxxAnother remarkable scientist of this period was the Englishman Henry Cavendish (1731-1810). An eccentric and something of a recluse, in 1766 he revealed his discovery of what he called “inflammable air” (hydrogen), and he also came up with the composition of water. Later, in 1798, he used an ingenious method to calculate the mass and average density of the earth, and the figure he arrived at was only about one per cent adrift! Very little of his work was published during his lifetime, but his research into electricity anticipated the findings of the English scientist Faraday and the German physicist Ohm.

xxxxxAnother remarkable scientist of this period was the Englishman Henry Cavendish (1731-1810), a brilliant eccentric who did all off his research unaided and published little of his findings during his lifetime. Born of English aristocratic parents when his mother was on holiday in Nice, southern France, he went to school in England and then studied at Peterhouse College, Cambridge. 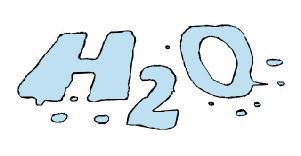 xxxxxLeaving without a degree in 1753, he carried out experiments in a cramped, make-shift laboratory at the family home in Great Marlborough Street, London. Here, assisted by his father, he worked out the specific heat of certain substances, and experimented with electricity. Later he moved to more spacious accommodation at Clapham Common. In 1766, uncharacteristically, he let the Royal Society know of some of his findings, and these included the discovery of what he called “inflammable air” (now known as hydrogen) and the composition of water. The English engineer James Watt also worked on the composition of water at around this time, and for a while there was some controversy as to who made the discovery first. 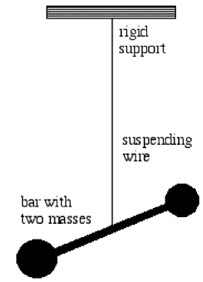 xxxxxOne of his greatest achievements came later, in 1798, when, by measuring the tiny force of attraction between two suspended lead balls, he arrived at the gravitational constant and then worked out the mass and average density of the earth. Amazingly, his calculation (6,600 million million million tons!) was only about one per cent out! At the age of forty he inherited an enormous sum of money - over £1 million - and it was then that he established a library in Soho to assist in scientific research. The extent of his work was not known until his notes were found after his death, and published in part by the Scottish scientist James Clerk Maxwell in 1879. Much of his work in electricity anticipated the discoveries later made by the English scientist Michael Faraday and the German physicist Georg Simon Ohm.

xxxxxIncidentally, Cavendish, though one of the richest men in the land, lived very modestly, and when out and about always wore the same clothes - a crumpled, old-fashioned suit and a battered three-cornered hat. An excessively shy man by nature, he was only at ease when in the company of his fellow scientists. It is said that he communicated with his housekeeper by leaving notes, and ordered female domestics to keep out of his sight. ……

xxxxx…… Apart from his library he left nothing to science, but in 1871 the family endowed the Cavendish Laboratory in Cambridge University, and this developed into a major centre for the study of physics.