xxxxxIn 1761, the English engineer James Brindley, working for the Duke of Bridgewater, completed a ten mile canal from the coal mines of Worsley to the city of Manchester. The "Bridgewater Canal", England's first canal of major commercial importance, marked the start of a network of inland waterways across the country. These stimulated trade and industry, and played a vital part in the Industrial Revolution. Canal building had already produced some major waterways on the continent, particularly in France, where a number of ambitious schemes had been completed by the end of the 17th century. 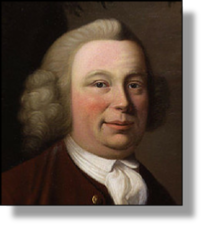 xxxxxIt was in 1759 that the Duke of Bridgewater, a pioneer in inland navigation, employed the English engineer James Brindley (illustrated) to construct a ten mile canal so that the coal he mined at his Worsley collieries could be transported to a textile factory in the city of Manchester. This "Bridgewater Canal", the first canal of major commercial importance to be built in Britain, took two years to complete (1761), and was extended to the Mersey at Liverpool - a distance of 30 miles - in 1776. In order to take as direct a route as possible and, at the same time, avoid the use of locks, Brindley's revolutionary scheme included an extensive tunnel connecting up with the pits, and an impressive aqueduct to cross over the River Irwell (illustrated below). This outstanding feat of engineering established him as the leading canal builder in the country. 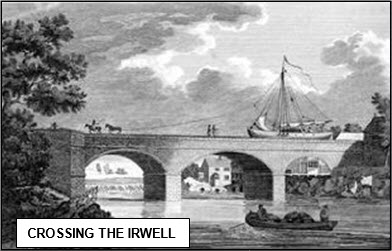 xxxxxBrindley was born at Tunstead, near Buxton in Derbyshire and, as a child, had little if any formal education. He began as a millwright and for a time worked in the expanding coal mining industry. In 1752, for example he designed and constructed an engine for draining coal mines at Clifton in Lancashire. After his work for the Duke of Bridgewater, however, he was employed as one of the first civil engineers, designing and, for the most part, overseeing the construction of a number of major projects. In all he built some 360 miles of canals in a network of inland waterways 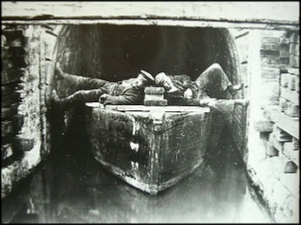 which covered many parts of the country. These included the Grand Union Canal from Manchester to the potteries, the Oxford-Birmingham canal, and canals at Coventry and Chesterfield. One of his greatest engineering feats was his long tunnel at Harecastle - 2,880 yards long - , built for the Trent and Mersey Canal. It was nine feet wide and twelve feet high and was negotiated by the boatmen pushing with their feet against the side walls (illustrated). In the open, the barges - wide, flat-bottomed boats - were pulled along by horses, though manpower was sometimes used.

xxxxxIncidentally, Brindley, an engineer of outstanding ability, was close to illiterate and virtually self-taught. We are told that he worked out all his calculations in his head, and, for that reason, left no records of his accomplishments!

xxxxxThe construction of the Bridgewater Canal marked the beginning of the canal building era in Great Britain. Over the next fifty years or so the network of waterways was considerably expanded. For example, a link was made between the Thames and the Bristol Channel via the Severn Canal, and Birmingham became the hub of a system which connected the Bristol Channel, London, the Humber and the Mersey. In Scotland, the foremost project was the building of the Caledonian Ship Canal, started by the Scottish engineer Thomas Telford in 1803 (G3c) to link up the chain of lakes which followed the line 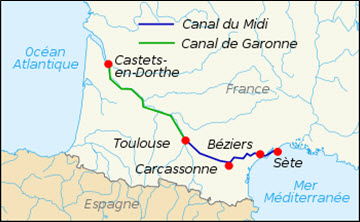 of the Great Glen. As we shall see, this network of canals stimulated trade, (particularly in exports), brought down the cost of raw materials - such as coal, timber and iron ore - and played a vital part in the Industrial Revolution then gathering momentum.

xxxxxBut this programme of canal building was by no means confined to Britain. Indeed, the French led the way in this field. By the end of the 17th century, for example, they had built canals to link the Loire with the Seine and - via the Canal du Midi - Toulouse with the Mediterranean. (The Canal de Garonne, which linked the Mediterranean with the Atlantic (illustrated) was completed in 1856.) The most impressive canal in Flanders was that built between Ypres and Boesinghe, where one single lock was constructed in such a way as to deal successfully with a fall of some twenty feet. Meanwhile in Germany, under the Elector of Brandenburg and Frederick I of Prussia, the rivers Elbe, Oder and Weser had already been linked by canal by the early part of the 18th century. 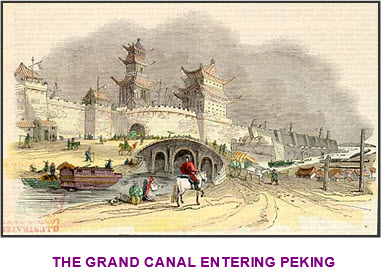 xxxxxIt must be said, of course, that canals were by no means a new phenomenon. Many were built in the earliest of times. Those in ancient Egypt and India were for irrigation purposes, but the Grand Canal in China, possibly constructed as early as the 4th century BC, was later extended to 1,000 miles, and used to transport grain from the Yangtse and Huai river valleys to the heavily populated cities further north. As we shall see, the first major ship canal in modern times, the Suez Canal, was not built until the second half of the 19th century.