xxxxxThe English artist George Stubbs is well known for his brilliant paintings of horses. By means of dissection and painstaking drawings he produced his The Anatomy of the Horse in 1766. He settled in London in 1760, and was soon in demand by the aristocracy of the sporting fraternity, producing hunting, shooting and racing scenes, as well as portraits of the outstanding race horses of the day. Among his many works were The Grosvenor Hunt, Grimcrack on Newmarket Heath, and Mares and Foals in a Landscape. He also produced scenes of country activities, such as his Harvesters and Reapers, and, by contrast, painted a large variety of exotic animals - tigers, leopards, cheetahs - including a number on the theme of a lion attacking a horse. He was a talented portrait artist, and for a time worked with the potter Josiah Wedgwood in making enamel paintings on ceramic plaques. His work is well represented in the Tate and National Galleries in London. He numbered among his friends the naturalist Joseph Banks, and his work influenced, among others, the English artists Thomas Gainsborough and Sir Edwin Landseer. 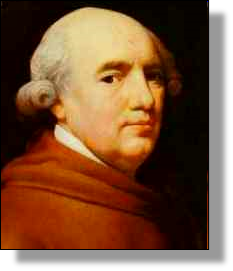 xxxxxxThe English artist George Stubbs is well known, above all, for his paintings of horses. Possessed of a remarkable knowledge of the anatomy of the horse, he was much in demand as an animal painter, producing numerous paintings of famous hunters and race horses. But he was also an accomplished painter of rural scenes, family groups, and “conversation pieces,” and this width of talent affords him a place amongst the foremost English artists of the 18th century.

xxxxxxStubbs was born in Liverpool, the son of a successful tanner (currier). He worked for his father until his mid-teens and then, after very little specialised training, made a living as a portrait artist in York and other northern cities. It was while at York that he put his keen interest in anatomy into practice, gaining a somewhat evil reputation for his work in dissection at the County Hospital. However, by his dissection of a woman who had died in childbirth, he was able to make drawings and then etchings to illustrate an Essay Towards a Complete New System of Midwifery, the treatise of a local doctor, John Burton, published in 1751. 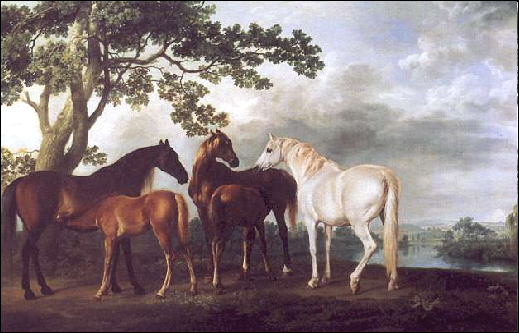 xxxxxxIn 1754 he went to Rome but did not stay long. On his return, anxious to avoid further hostility concerning his morbid interest, he rented a farmhouse in Horkstow, a remote Lincolnshire village. It was here that, over 18 months or so, he carried out a series of dissections on horses. Conducted with painstaking precision and acute observation, he then made careful notes and detailed drawings of his findings. He settled in London in 1760 and, finding no one to engrave his drawings, produced them himself. These 18 plates of anatomical drawings - brilliant works of draughtsmanship - were then used to illustrate his book The Anatomy of the Horse, published in 1766. This brought in a host of commissions for horse paintings - especially amongst the aristocrats of the racing fraternity - but, in fact, his work had been in much demand since arriving in London. In 1760, for example, the Duke of Richmond had ordered three pictures depicting his family and friends at his racing stables, or out hunting and shooting, and in 1762 he had painted The Grosvenor Hunt, one of eleven pictures commissioned by Lord Grosvenor. Noteworthy, too, is his Huntsmen Setting Out from Southill, produced for Lord Torrington. 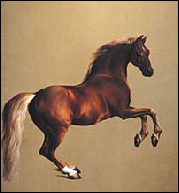 xxxxxxIn addition to such general sporting events, he produced some magnificent portraits of the outstanding race horses of the day, such as Gimcrack on Newmarket Heath and the prancing Whistlejacket (illustrated), originally intended to have a portrait of George III on his back! And some of his finest work is to be seen in his informal groups, such as Mares and Foals by a Stream (illustrated above), and Mares and Foals in a Landscape, now in the Tate Gallery, London. He also painted some delightful scenes of familiar country activities, such as the Haymakers and Reapers. Somewhat formal in composition, they were both painted in 1785, and are also in the Tate Gallery. He was also a fine portraitist, as seen by his self-portrait above.

xxxxxxIn general Stubbs’ works are characterised by an atmosphere of elegance, charm and calm, but - as illustrated above - not all his works were that sedate. He painted a number of scenes depicting the terror and savagery of a horse being attacked by a lion - probably based on an antique sculpture he had seen in Rome - and he produced a wide variety of exotic animals. He painted the first zebra (African Ass) ever seen in England, and followed this up with such animals as the tiger, leopard, giraffe, monkey and rhinoceros, all studied in private zoos. His painting Cheetah and Stag with Two Indians (Illustrated above) recorded an incident in Windsor Great Park when a cheetah which had been presented to the king was seen off by a stag making good use of its antlers. 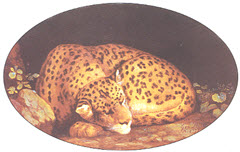 xxxxxxYet despite a good clientele, during his last twenty years Stubbs was frequently in debt, due in the main to his taking on ambitious schemes that brought in little money. For a number of years, for example, he worked closely with the master potter Josiah Wedgwood making enamel paintings on ceramic plaques. Attractive though they were - the sleeping leopard is an example - they never became popular. Likewise his illustrations for the Turf Review, tracing the history of racing from 1750, remained unsold, and his somewhat bizarre attempt to compare the anatomical structure of the human body with that of a tiger and "common fowl", taken on at the age of 71, was never completed.

xxxxxxA remarkable, resilient individual, Stubbs spent his life in search of new knowledge, and he is sometimes referred to as the greatest painter-scientist in the history of art. He was a friend of the medical brothers William and John Hunter, and of the explorer and naturalist Joseph Banks. His animal 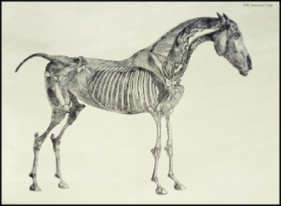 painting had an influence on, amongst others, the English artists Thomas Gainsborough and Sir Edwin Landseer.

xxxxxxIncidentally, the pencil drawings for Stubbs’ remarkable series of engravings in his The Anatomy of the Horse are in the Royal Academy of Arts, London. ...... Four years after coming to London he moved to a house in Somerset Street, a site now occupied by Selfridges department store.