xxxxxAs we have seen, the defeat of the Maratha at the hands of the Afghans at the Battle of Panipat in 1761 put pay to their hopes of succeeding the Mughals as rulers of India. But they were not finished yet. As the Mughal Empire went into decline, they formed a confederacy of five powerful chiefdoms. In 1775, soon after arriving as the new governor of Bengal, Warren Hastings sought to reduce the threat from the Maratha by intervening in a power struggle within the confederacy. The plan misfired. In 1779 a British force was defeated at Wadgaon, near Poona, and three years later the British had to abandon their leadership candidate and come to terms with the peshwa or leader of the Maratha. Further trouble broke out with the Maratha in 1803, but, as we shall see, they were finally defeated by the British and their lands confiscated in 1818 (G3c). During the first Anglo-Maratha War, Hastings also faced a conflict in southern India. In 1780 Hyder Ali, ruler of Mysore, supported by the Nizam of Hyderabad, attacked Madras in one of a series of Anglo-Mysore Wars. It is to Hasting's credit that, having sent troops to Madras, he managed to split the alliance, defeat Hyder Ali at the Battle of Porto Novo in 1781, and bring an end to the war three years later. Mysore fell to the British when their next leader, Tippu Sahib, was killed in 1799 (G3b). 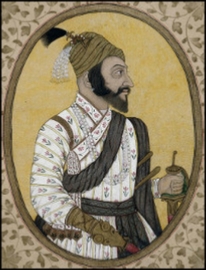 xxxxxThe Maratha kingdom was established by Shivaji in 1674, despite attacks upon it by the Mughal leader Aurangzeb. Then during the first half of the 18th century the Maratha made gains at the expense of the declining Mughal Empire. By means of a loose confederation of powerful independent families they extended their control over much of central and northern India. At one time it looked as though they would become the dominant power on the sub continent. However, in 1747, with the death of Nadir Shah of Iran, there emerged the Afghan leader, Ahmad Shah Durrani. As we have seen, it was he who, in January 1761 met up with the Maratha army and, at the Battle of Panipat, virtually wiped it out, putting an end to their hopes of succeeding the Mughals as rulers of India.

xxxxxBut the Maratha were a warrior people, and whilst their dream of ruling India had been somewhat shattered at Panipat, they were ready to continue their fight for survival, not only against the remnants of Mughal power, but also against the British, now beginning to take a predominant role in Indian affairs. Their leader, Peshwa Balaji Baji Rao became the head of a loose confederacy of five northern chiefs. Each developing into military dictatorships, this uneasy union emerged as the most powerful element in the political chaos which followed the fall of the Mughal Empire and the return of Durrani's army to Afghanistan.

xxxxxThus by 1765 post-Mughal India was complex, but was becoming clearer. There remained a number of Mughal pockets in the north - Allahabad, Avadh and Delhi - and a larger area in the Deccan, where the Nizam of Hyderabad was managing to cling on to power. The Sikhs were beginning to recover some of their prestige in the Punjab, whilst the Maratha were preparing for renewed conquest, and the old Hindu state of Mysore, having fallen into the hands of the military adventurer, Hyder Ali in 1761, held sway over much of southern India. Amid this jigsaw of rival factions, the East India Company was endeavouring to tighten its hold on Bengal, but, to confound any hope of unity, was administered by three independent centres of power at Calcutta, Bombay and Madras. (A map below shows these major regions by the late 1760s.) 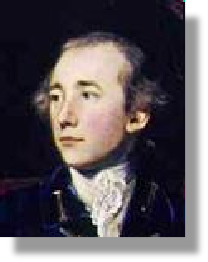 xxxxxSuch then was the situation which confronted the new governor of Bengal, Warren Hastings (illustrated) when he arrived in India in 1772. He was determined to consolidate the territorial gains made by his predecessor Robert Clive but, at the same time, he was under instructions to avoid conflict and to simply strengthen Bengal as a base for the safe conduct of trade. However, in the unstable situation then existing, keeping out of entanglements with a myriad of local power blocs was easier said than done. Many were anxious to gain British support against their rivals, and this provided ample opportunity for wheeling and dealing, and the bribery and extortion that went with it.

xxxxxIn 1775, attempting to weaken the power of the Marathas - the greatest threat to the stability of the region at that time - Hastings agreed to intervene in a struggle for succession then going on within the confederacy. Such military pressure was necessary in the first instance, he concluded, in order to get on friendly terms with the Maratha leadership in the long term. By the Treaty of Surat the company's Bombay government supported the claim of Raghunath Rao, uncle of the last Peshwa, in return for the acquisition of Salsette and Bassein islands. However, the company's supreme government at Calcutta then annulled this agreement by the Treaty of Purandhar in March 1776, only to have the British government in London come down in favour of the original treaty in 1778! In the New Year, amid this saga of administrative blundering, a British force, making its way to Pune (Poona), was waylaid by the Maratha and defeated at Wadgaon. However,xthe war continued until the Treaty of Salbai in May 1782, when the British, abandoning their candidate Raghunath Rao, made peace with the ruling Peshwa, and the conflict ended in stalemate. All the British could show for seven years of war was an example of their ineptitude in government, and the acquisition of the island of Salsette, near to Bombay Island. 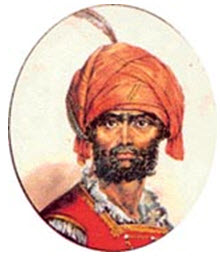 xxxxxMeanwhile, in 1780, while this war was in progress, the British found themselves facing a greater threat. Hyder Ali (c1720-1782), the ruler of the southern State of Mysore, having already had a confrontation with Madras in 1769, now opened the second of the Anglo-Mysore Wars. Assisted by the Nizam of Hyderabad and the Maratha, he again attacked the British at Madras and, defeating the company's forces, overran and devastated the Carnatic, a strip of territory on the east coast of India. To make the situation worse, there was no hope of any help from Britain - immersed in the War of American Independence - , and the French, having entered that war on the side of the Colonists, were sending troops to India.

xxxxxAgainstxsuch odds, it is to Hastings' credit that the company emerged unscathed and, indeed, strengthened on both fronts. He sent forces to save Madras, and then set about dividing his foes. By 1781 he had swung the military balance in his favour and defeated Hyder Ali at the Battle of Porto Novo. Eventually, the state of Mysore agreed to the restoration of the status quo by the Treaty of Mangalore in 1784. Meanwhile the French, arriving too late to play a decisive role, were held in check until the peace settlement, reached in Paris in 1783. By his astute management of the company's 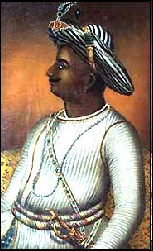 military forces and some skilful diplomacy amongst rival groups, he ensured the continuance of British power in India. It was during these campaigns, however, that his actions - notably his questionable treatment of Raja Chait Singh of Varanasi and the begums of Oudh - led to his impeachment in Parliament following his retirement and return to England in 1785.

xxxxxThe third and fourth of the Mysore Wars were waged against Hyder Ali's son, the colourful Tippu Sahib (illustrated). In 1792 he was forced to give up half his domains, and then in 1799 (G3b) he was killed when the British stormed and captured his capital Seringapatam and took over control of the state.

xxxxxThe Maratha took a little longer to subdue. The second war, from 1803-05, involved British forces taking part in a dispute between various Maratha clans. As we shall see, this was followed twelve years later by the final conflict, brought to an end in 1818 (G3c) with the defeat of the Peshwa and the British annexation of all his territories.

xxxxxIncidentally, in 1947 the state of Mysore became part of an independent India, and was renamed Karnataka in 1973. MAP BELOW

MAJOR REGIONAL POWERS IN INDIA AROUND THIS TIME 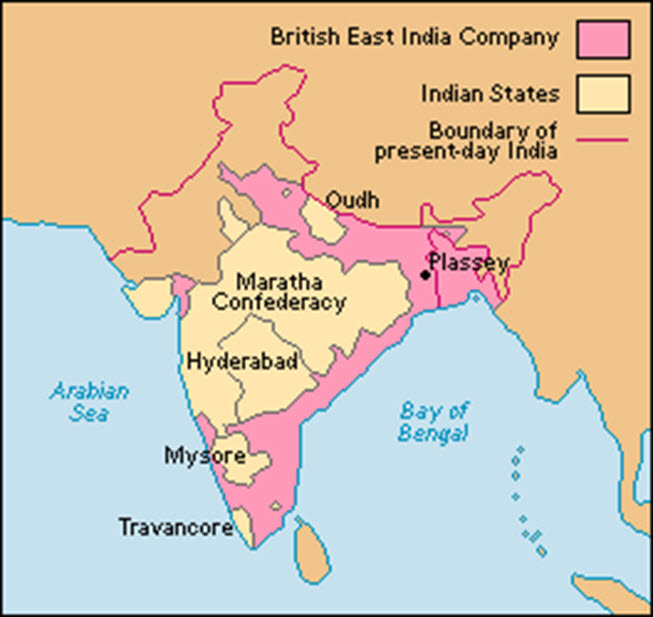