THE AMERICAN WAR OF INDEPENDENCE

THE OPENING BATTLES OF LEXINGTON and CONCORD 1775

xxxxxThe Battle of Lexington in 1775 was nothing more than a skirmish, but it proved the start of the American War of Independence (the American Revolution). Pre-warned that some 700 British soldiers were marching on Concord to capture an arms dump, about 70 militiamen barred their way on Lexington Green. They were ordered to disperse, but stood their ground. The British troops then opened fire and, following a brief encounter, the Americans were forced to retreat after losing eight men. An armed conflict had begun. 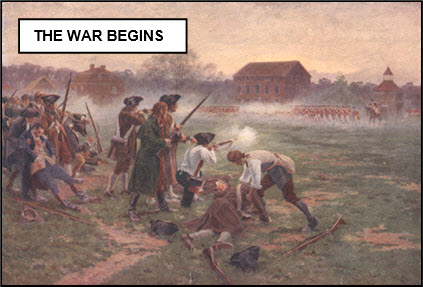 xxxxxThe Battle of Lexington was more of a skirmish than a serious military engagement, but it nonetheless marked the beginning of the American War of Independence (the American Revolution). Having been ordered to seize the military stores held by the colonists at Concord, Massachusetts, a British force of some 700 men was dispatched from Boston and, in the early hours of April 19th 1775, was suddenly confronted on Lexington Green by some 70 minutemen (men ready to fight "in a minute"). They were ordered to disperse, but their commander, a Captain John Parker, told his men to stand their ground. If the British wanted a war, he is alleged to have said, then “let it begin here”. Then a shot rang out, and it did just that. It is not known who fired the shot, but in the brief encounter that followed, the Americans were forced to retreat after losing eight men.

xxxxxThe Battle of Concord followed on from the opening skirmish at Lexington. Having reached the town, the British force of some 700 men were soon engaged in a battle for Old North Bridge. Here about 200 militiamen held on to their position on the far side of the bridge, despite a number of attacks by the redcoats. Eventually the British regulars withdrew and, having found little of the military equipment they were sent to confiscate, started their march back to Boston. It proved a costly return journey. Using hit-and-run tactics, the Americans fired on the column all of the way, killing a total of 273 men. For the British, exhausted and demoralized, it was a disaster which came close to a rout. As we shall see, next came the bloody encounter at Bunker Hill, later in 1775. 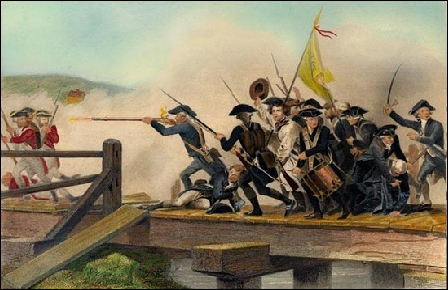 xxxxxAfter the skirmish at Lexington, the redcoats then continued their march to Concord, arriving there about 7.30 am. Here, however, they found that most of the military supplies had been destroyed or hidden. There then followed the Battle of Concord, a brief but significant engagement at the town's Old North Bridge. About 200 militiamen took up a position across the River Concord on the far side of the bridge. Despite several attempts, the British were unable to dislodge them, and were eventually forced to fall back and begin their return journey. For them, this proved a disaster. Using hit-and-run tactics, the Americans harassed the redcoats along the entire route to Boston. At the end of it, the British loses were 273 compared with 95 provincials. And had the British regulars - by then exhausted and demoralized - not been reinforced on reaching Lexington, then the retreat would have been turned into a rout. But this was just the beginning. As we shall, British loses were to be much heavier at the next confrontation, fought two months later in 1775 at the Battle of Bunker Hill.

xxxxxIncidentally, in 1874 a stone replica of Old North Bridge, and a statute entitled The Minute Man were erected to mark the site of the Battle of Concord. The American sculptor concerned, Daniel Chester French (1850-1931), later produced the magnificent marble figure of the seated Abraham Lincoln in the Lincoln Memorial, Washington, D.C., and also a statue of Ralph Waldo Emerson, the American philosopher who in his Concord Hymn of 1836 referred to the opening shot at Lexington as "the shot heard 'round the world". 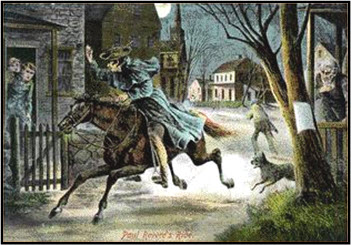 xxxxxThatxthe colonists were given warning of the British advance on Concord was due to the historic midnight ride by the patriot Paul Revere (1735-1818) and two other riders, William Dawes (1745-1799) and Samuel Prescott (1751-c1777). All three rode from Boston to Lexington the night before the arrival of the British column. Revere got there first and was in time to warn off Samuel Adams and others. They were thus able to make their escape. The three messengers then made for Concord, but Revere was stopped by a British patrol, and Dawes had to turn back. Prescott reached the town, however, and gave the local militia enough time to hide or destroy their powder and guns. Revere's part in this dramatic event was later immortalized in the ballad Paul Revere's Ride, written with a certain amount of poetic license by the American poet Henry Wadsworth Longfellow in 1863.

xxxxxTwo days before making his dramatic ride through the night, Revere had set up a warning system in Boston to warn the city and surrounding areas of a pending attack. One lantern alight in the steeple of Boston's Old North Church (illustrated) meant that the British were approaching by land, two gave warning that they were arriving by sea!

xxxxxThe man destined to be an American folk hero was born in Boston and, as a young man, acquired widespread fame as an outstanding designer and maker of high quality silverware. He also turned his hand to engraving and, as an ardent patriot, was responsible for the famous engraving of the Boston Massacre of 1770, a version of the incident which was more a propaganda piece than a work of historical accuracy. In 1773 he took part in the Boston Tea Party, and it was after this that he became a courier for the revolution. During the conflict he used his skill to print money for the Massachusetts Congress, designed the colony's official seal - still in use today - , and produced cannon and musket balls. When the war was over he continued to make fine silverware, but he also established a rolling mill at Canton, Massachusetts for the manufacture of sheet copper, mainly used in the making of ships.

xxxxxThat the colonists were given warning of the British advance on Concord was due to the famous midnight ride by the patriot Paul Revere (1735-1818). He, together with two other riders, rode from Boston to Lexington the night before the redcoats arrived. Revere got there first and was able to give Samuel Adams and other revolutionary leaders sufficient time to escape. Revere, who by trade was a brilliant silversmith and engraver from Boston (he produced a dramatic engraving of the Boston Massacre), also took part in the Boston Tea Party and, during the American Revolution, produced cannon and musket balls. Seen today as a folk hero, his dramatic gallop to Lexington was later immortalized in the ballad Revere's Midnight Ride, composed by the American poet Henry Wadsworth Longfellow in 1863.