xxxxxIn 1765, just two years after the Treaty of Paris, the Stamp Act, taxing the American colonies to help pay for their defence, caused widespread rioting. Many refused to use the stamps - the payment required on all publications and legal documents - and some burnt them in public. British merchant ships were blockaded, and a "Stamp Act Congress", convened in New York, drew up a list of its rights and grievances. So extensive was the revolt - backed by William Pitt and Benjamin Franklin in London - that Parliament eventually repealed the Act early in 1766. By the Declaratory Act, however, it maintained the right to impose taxes throughout the empire. The repeal somewhat defused the situation, but the protest brought about a measure of unity and common purpose between the divergent colonies. As we shall see, further taxes were to lead to the Boston Massacre in 1770, and a growing demand for independence. 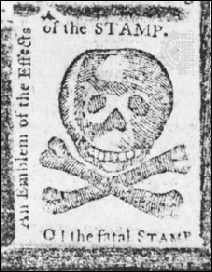 xxxxxAs we have seen, the Treaty of Paris of 1763, favourable though it certainly was for Britain and her growing empire, contained one or two worrying aspects for the British parliament. First and, at this time foremost, was the huge war debt that Britain had accumulated during the seven years' of struggle, estimated at £114 million. There was a pressing need to reduce it. The second was the fact that the removal of the French menace in North America had made the colonies there much less dependent upon the mother country in the matter of defence. Following the signing of the treaty, it must be said, there was no serious talk of independence and no movement to that effect on the other side of the Atlantic, but should disagreement develop between Britain and her American colonies, then the possibility was always there.

xxxxxThat dispute was to come sooner than expected and, when it came, to be more embittered than expected. As we have seen, in the same year as the Treaty of Paris, Britain had become suddenly embroiled in Pontiac's War, a co-ordinated attack by a number of Indian tribes along the frontier settlements in North America. The rising was eventually put down, but it had painfully drawn attention yet again to the costs involved in policing an empire. It is perhaps understandable that the British government should then attempt to recoup some of the cost from those it had defended. 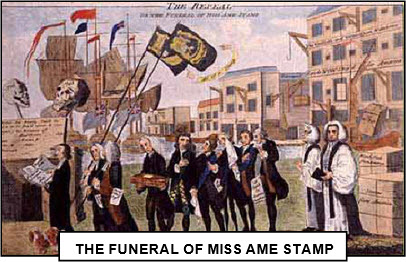 xxxxxWith this in mind, the British Chancellor of the Exchequer, Sir George Grenville, had already introduced a Sugar Act in 1764 to raise revenue, and this had met with but limited opposition. In March of 1765, however, when Parliament imposed the Stamp Act, the public response was quite different, and alarmingly so. Rowdy and sometimes violent protests broke out all over the colonies on the grounds that an Englishmen could only be taxed through his own representative assembly. In short, the slogan said it all: "No taxation without representation". To reinforce their argument, a large number of the colonists refused to use the stamps, and many burnt them in public. At ports up and down the coast a blockade was imposed on British merchant shipping. On the more diplomatic front, opposition was just as determined. The so-called Stamp Act Congress was convened in New York in the October. Here the representatives of nine colonies met to draw up their "rights and grievances", and to petition the king and parliament to repeal the Act. 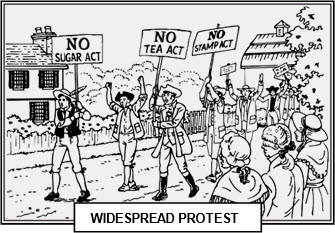 xxxxxThe British government was totally taken aback by this extraordinary wave of protest. The act in question, which, by means of an official "stamp", simply placed a tax on all publications and legal documents, was a common revenue device in England. Furthermore, the colonies had been consulted and had offered no alternative solutions. William Pitt, nonetheless, spoke out in favour of the colonists, arguing for "imperial liberty", as did the American politician Benjamin Franklin when answering questions in the House of Commons. Eventually, Parliament, bowing to pressure - particularly from British exporters - repealed the act early in 1766 by 275 votes to 61. However, in order not to lose face, alongside the repeal went the Declaratory Act reasserting Parliament's right of imposing direct taxation anywhere in the empire.

xxxxxThe repeal clearly took the heat out of the situation, and matters calmed down somewhat. However, the Declaratory Act - necessary though it was thought to be - remained as a challenge to the colonists' clear contention that the right to tax was dependent upon representation in government. Furthermore, the width and depth of the protest had kindled a spirit of rebellion, and fused some kind of unity between the divergent colonies. The "Sons of Liberty", for example, an organisation formed to oppose the Stamp Act by fair or foul means, remained in existence. If independence were to be contemplated - and some were beginning to do so - then some measure of cohesion had already been achieved. In the meantime, as we shall see, the introduction in 1767 of a series of import duties - foreseen and feared by the American statesman John Adams - was to lead to further protest and the "Boston Massacre" of 1770. Even by then there was still time for compromise, though it was fast running out.