xxxxxThe first successful manned flight took place in November 1783, when a hot air balloon with two passengers aboard travelled over Paris for a distance of six miles. The balloon, made of cloth and lined with paper, was the work of the French brothers Joseph and Étienne Montgolfier. They were papermakers by trade but, being interested in science, they carried out a series of experiments earlier in the year, one of them at Versailles, where Louis XVI and Marie Antoinette watched the ascent of a balloon carrying a sheep, a duck and a rooster. The American scientist Benjamin Franklin watched the November flight. 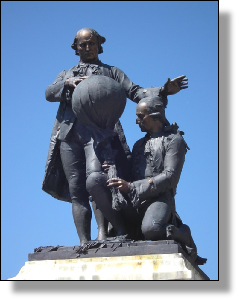 xxxxxInxNovember 1783, a hot-air balloon constructed by the French brothers Joseph and Étienne Montgolfier made the first successful manned flight. With two passengers, Jean François Pilâtre de Rozier (1754-1785) and François Laurent, the Marquis d’Arlandes (1742-1809), it stayed up for twenty five minutes and travelled a distance of some six miles from the Château de la Muette in the Bois de Boulogne to Bute-aux-Cailles on the outskirts of Paris. Among the vast crowd watching this momentous occasion was the American scientist and statesman Benjamin Franklin. 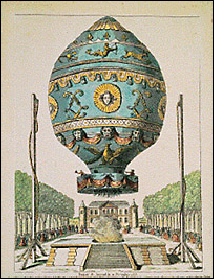 xxxxxExperiments for this remarkable feat began in June of that year, when the brothers launched a hot air balloon from the market place at Annonay, near Lyons. Made of cloth, lined with paper, and fastened together with buttons, it rose to about 3,000 feet, stayed up for around ten minutes, and then came down nearly two miles distant. The next test flight took place at the Palace of Versailles in the September. In front of a large crowd - which included Louis XVI and Marie Antoinette - a large balloon, carrying a sheep, a duck and a rooster, took to the air and covered about two miles in eight minutes. Finally, in the October, the physician François Pilâtre de Rozier became the first human to go aloft in a tethered balloon, staying on high for four hours. The epic free manned flight followed a few weeks later.

xxxxxThe brothers were papermakers by trade, working at the family's busy factory in the town of Vidalon, near Annonay in south-west France. Both were keen amateur scientists. Jacques was responsible for the invention of vellum paper, and his brother Étienne made a form of parachute and constructed a hydraulic ram and press. In the early 1780s they became convinced that a large paper bag, filled with "a substance of a cloud-like nature" would float upwards. It was then that they started their experiments, directing smoke into a silk bag. (The bronze statue above stands in the centre of Annonay.) 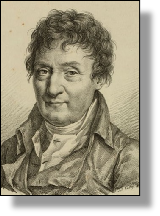 xxxxxNot surprisingly, the experiments conducted by these pioneering brothers awakened scientific interest in the matter of aviation. InxDecember 1783, just ten days after the first manned flight, the French physicist and mathematician Jacques Charles (1746-1823) - together with the Robert brothers, Anne-Jean (1758-1820) and Nicolas-Louis (1760-1820) - invented and demonstrated a hydrogen-inflated balloon made out of rubberised silk (illustrated). Accompanied by Nicolas-Louis Robert, he made the first ascent using this lighter-than-air gas, and kept aloft for something like two hours, starting at the Tuileries Gardens and ending at the village of Nesles-la-Vallée, some 27 miles away. The following year he made several flights, r

eaching altitudes of 10,000 feet. As a result, hydrogen, because of its inherent buoyancy, soon replaced hot air in balloon flight.

xxxxxIt was not long before these balloons were put to good use by the military. During the Napoleonic Wars, for example, the French often used tethered balloons for observing the enemy's lines or sending messages, and both sides were to use them in the American Civil War and the Franco-Prussian War. And powered airships eventually developed from these early, primitive balloons. 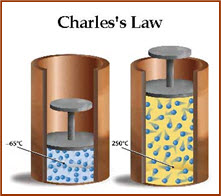 xxxxxIt was this interest in gases which, four years later, led Charles to formulate what came to be known as Charles' Law. (He shared this knowledge with the French chemist Joseph Gay-Lussac so the law is sometimes named after him). This basic law concerning the thermal expansion of gases postulated that the volume occupied by a fixed amount of gas is directly proportional to its absolute temperature, provided the pressure remains constant.

xxxxxCharles, who was born in Loiret, central France, first worked as a clerk in the ministry of finance, but later took up science. Apart from his work on gases, he made a number of inventions - including a hydrometer - and, inspired by the work of the American scientist Benjamin Franklin, carried out a number of experiments with electricity. His published papers, however, were concerned mainly with mathematics. He was elected to the Académie des Sciences in 1795, and was later appointed the professor of physics at the Conservatoire des Arts et Métiers in Paris. 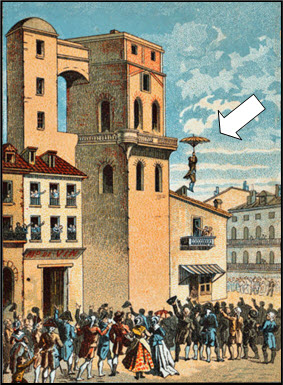 xxxxxIncidentally, 1783 was quite a year for first-time events and for Frenchmen doing them! Apart from flights by hot-air and hydrogen balloons, the Frenchman Louis-Sébastien Lenormand (1757-1837) is believed to have made the first parachute jump. Having experimented by jumping from the top of a tree while clutching two parasols, in the December he climbed the tower of the Montpellier Observatory and jumped with a home-made parachute measuring 14 feet 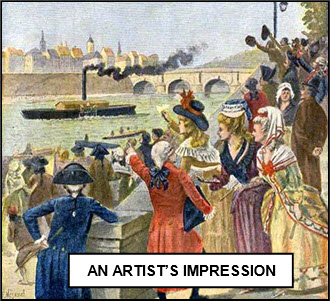 across. He landed safely (illustrated)! ……

xxxxx...... And it was in this year that a French nobleman, the Marquis de Jouffroy d'Abbans (1751-1832) operated the first successful steam-powered boat. Named the Pyroscaphe, it was propelled by two paddle wheels and it took place on the placid waters of the River Saône at Lyon. The boat moved against the current for about 15 minutes before the engine gave out. ……

xxxxx…… As we shall see, the first balloon crossing of the English Channel - Dover to Calais - took place in 1785 (G3b), and the Frenchman André-Jacques Garnerin was the first to make regular parachute jumps, including one from 8,000 feet in 1802.

xxxxxInspired by the pioneer work of the Montgolfier brothers, the physicist and mathematician Jacques Charles developed a hydrogen-inflated balloon, and in December 1783, together with a friend, made the first ascent using this lighter-than-air gas. It stayed up for two hours, and travelled 27 miles. Four years later, having continued his research into gases, he came up with Charles' Law. This stated that the volume occupied by a fixed amount of gas is directly proportional to its absolute temperature, provided the pressure remains constant. He published a number of papers on mathematics, and became a professor of physics.