xxxxxThe French rococo artist Jean Honoré Fragonard, pupil of both Chardin and Boucher, showed an enormous range of ability, but is best remembered for his light, often erotic or sensual scenes, such as The Swing (1766), The Bathers and The Bolt. His four paintings under the title The Pursuit of Love were more delicate, set amid poetic landscapes, and he produced some delightful domestic scenes, as in Woman Reading a Book and The Love Letter. And in addition to some delicate as well as robust portraits, like the one of his patron Abbé de Saint-Non, he produced etchings and thousands of drawings. His rapid brush strokes and lightness of touch gave a romantic, ethereal quality to his work, and made his paintings extremely popular. He was a favourite of both Louis XV and Louis XVI, but his career came to an end with the approach of the Revolution. 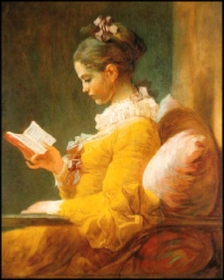 xxxxxThe French artist Jean Honoré Fragonard, pupil of François Boucher for some four years, showed an enormous range of ability, though he is best known for his Rococo style with its light-hearted, often erotic or sensual themes. But apart from his boudoir scenes or pastoral, fanciful landscapes - known as fêtes galantes - he could produce works in the grand manner, as well as demure pieces like Woman Reading a Book (illustrated). Furthermore, having studied for some months with Jean-Baptiste Chardin, he went on to produce some fine domestic scenes, many featuring episodes from childhood. Remarkable, too, was his range of technical talent. Apart from his work in oil - he produced over 500 paintings during his career - he excelled in pastels, gouache, etching and crayon. 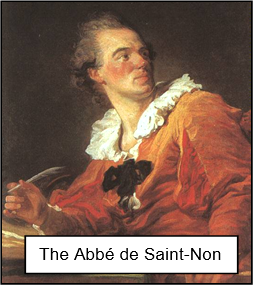 xxxxxHe was born in the village of Grasse in Province, southern France, the son of a glove maker. He was clearly influenced by the vibrant colours, lush growth and dazzling light of his home region, but not for long. In 1738 the family moved to Paris. He began working for Chardin at the age of 16, but he couldn't cope with his master's rigorous discipline and left after six months. He was eventually taken on by François Boucher - then at the height of his fame - and having produced some large designs for Gobelins, the famous tapestry factory, he won the Prix de Rome with a fitting religious canvas in the grand style. After attending an art school in Paris, he travelled to Italy in December 1756. Here he was impressed by the works of the Venetian artist Giovanni Battista Tiepolo. After making numerous sketches of the Italian countryside, he returned to Paris in 1761, where he achieved public success four years later with his dramatic history painting Coresus Sacrificing Himself to Save Callirhoe. 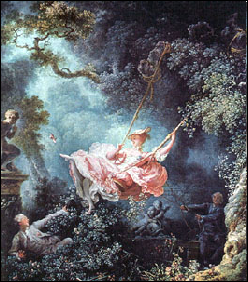 xxxxxBut, quite apart from the extra money to be had, Fragonard was much more at home with his pastoral scenes, and particularly those which were erotic or suggestive to that end. His famous painting The Swing of 1766 (illustrated), for example, outwardly charming, has the girl's lover looking up her skirts while the innocent husband obligingly pushes the swing! And works like The Bathers and The Bolt were aimed to meet popular liking for the delights of the flesh, either visually or by implication. More delicate in their romantic theme were his four paintings entitled The Pursuit of Love, where furtive assignations are captured in poetic landscapes, and his brilliant Love Letter, both charming and alluring. Much of his work was in the flowery, frivolous and colourful Rococo style, where his rapid brush strokes and lightness of touch leave the subject matter ill-defined, creating a romantic, ethereal quality. Within such fantasy lay the germ of Romanticism. Not to be forgotten, too, are his portraits - full of vigour in the case of his patron the Abbé de Saint-Non (illustrated above), and full of delicacy in the case of his Boy Dressed as a Pierrot - his later works in this genre owing much to his high regard for the Dutch artists Rembrandt and Frans Hals. Then there were his etchings and thousands of drawings, some produced for book illustrations, others providing a fascinating glimpse into life at court. Illustrated below are (left to right): The Music Lesson, Boy Dressed as Pierrot, Lady with Dog, and The Love Letter.

xxxxxHe was a favourite of Louis XV and XVI and, apart from the art connoisseur Abbé de Saint-Non, could count among his patrons the influential Madame du Barry, the mistress of Louis XV. His highly successful career came to a fairly abrupt end, however, with the coming of the French Revolution in 1789. Nonetheless, he spent some of his last years in Paris, where, surprisingly, he was befriended by the French neo-classical painter Jacques Louis David, despite the artistic gulf between them. But, in truth, his type of work had been overtaken by the harsh events of the day, and there was little call for it, or regard for him.

xxxxxThe French landscape artist Hubert Robert (1733-1808) was one of Fragonard's closest friends. They met in Rome and went on a tour of Italy together. His main interest lay in depicting the grandeur of the classical ruins in Italy, and he produced many romantic paintings of ancient fountains, temples and colonnades, set amid idyllic surroundings. His work was influenced by the famous Italian etcher Piranesi, whom he met in Rome. He later produced scenes of Roman ruins in southern France - like the Pont du Gard - and views of places in and around Paris, including Versailles. He was imprisoned during the French Revolution, but later worked with Fragonard in the Louvre and produced his View of the Grande Galerie. 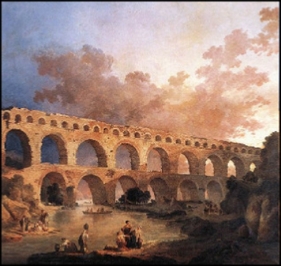 xxxxxOne of Fragonard's closest friends was his fellow countryman and landscape artist Hubert Robert (1733-1808). He was fascinated by the grandeur of the classical ruins in Rome, and produced many romantic paintings based around ancient fountains, temples and colonnades, set amid idyllic surroundings. It was in this city that he came to know the famous etcher Giambattista Piranesi, and it was there, too, that he met Fragonard. Together with him and his generous patron the Abbé de Saint-Non, he travelled through southern Italy and Sicily, and spent the summer of 1760 at the Villa d'Este at Tivoli, producing a large number of chalk drawings of the ancient classical buildings. And, needless to say, he was stimulated by the excavation work then going on at Pompeii and Herculaneum. It is perhaps little wonder that he was often referred to as Robert des Ruines.

xxxxxOn returning to Paris in 1765, he became a member of the French Royal Academy the following year, and popularised his landscapes by a series of exhibitions. Later his work included Roman remains in the south of France - such as the Pont du Gard in 1787 (illustrated above) - and views in and around Paris. These included some of Versailles, where, as a landscape architect, he also introduced picturesque ruins and grottoes for the gardens at the Petit Trianon. His paintings sold well, but like many artists at this time, his career was badly affected by the outbreak of the French Revolution. He was imprisoned for a time, but in the 1790s he did work with Fragonard on some work for the Musée Français in the Louvre, and this included his Imaginary View of the Grande Galerie of the Louvre in Ruins, painted around 1796 (illustrated centre below). A talented artist, like Fragonard, his death went virtually unnoticed. Illustrated below (left and right) are two views of ancient Rome.

xxxxxJean Baptiste Greuze (1725-1805) was another French rococo artist of this period but, in the main, he depicted scenes of simple family life, the virtues of which were being extolled at this time by the French philosophers Diderot and Rousseau. Among his works are The Father Reading the Bible to His Children and The Prodigal Son. Some of his works, however, such as Young Girl Weeping Over Her Dead Bird, were contrived and over-sentimental. Today, he is best remembered for his portraiture, notably his natural portrayal of the revolutionary leader Robespierre and of the military genius Napoleon. 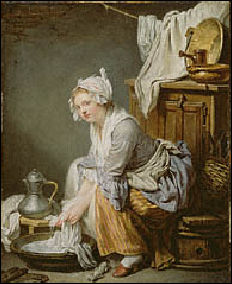 xxxxxHe was born in Tournus, near Macon in Burgundy, and studied art in Lyon, and then at the Royal Academy in Paris and the French Academy in Rome. Like Fragonard, he was capable of producing acceptable history scenes, as in his Septimus Severus Reproaching Caracalla, but, influenced by the Dutch school, he was much more attracted to genre subjects. These proved extremely popular, and many of his works were reproduced as engravings, particularly his first work to be exhibited in 1755, his highly moralistic painting The Father Reading the Bible to His Children. Other works in the same vein included The Village Bride, The Father's Curse and The Prodigal Son, but such sentimental themes were sometimes over played, as in his The Paralytic Cared for by His Children and Young Girl Weeping over Her Dead Bird. Furthermore his many portraits of young, coy girls, looking innocent and vulnerable, tend to question his avowed intention to inculcate moral virtue!

xxxxxGreuze was above all an able portrait artist - as the four above clearly illustrate - and it is perhaps here that his artistic importance lies. Remarkable are his refreshingly natural portrayals of the French revolutionary leader Robespierre and the military genius Napoleon. To be admired, too, is his number of drawings in chalk. By the early 1780s, however, demand for his work began to dry up, and, once again, the coming of the French Revolution brought a reversal in popular taste, putting an end to his career and his earlier claim to fashionable fame.