THE BATTLE OF BUNKER HILL 1775

xxxxxEncouraged by the showing of the colonists at the Battles of Lexington and Concord early in 1775, in June 1775 some 16,000 militia (some say 30,000!) converged on Boston to drive the British out. About 1200 occupied Breed's Hill overlooking the harbour, and it took three attacks by royalist troops before they were forced to abandon their positions. The British went on to capture the adjoining height of Bunker Hill, but their losses amounted to more than 1,000 dead and wounded. As we shall see, just eight months later, in March 1776, the new American commander, General George Washington, was to force the British out of Boston. They had to leave by sea and establish a garrison at Halifax, Nova Scotia. 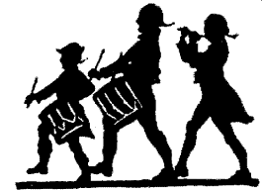 xxxxxThe skirmish at Lexington and the Battle of Concord in 1775, together with the losses suffered by the British troops on their return march to Boston, gave a much-needed psychological boost to the American cause in general and their irregular forces in particular. And they also served to polarize the issues at stake between the majority of colonists and the mother country. If there was no going back, then sides had to be taken. It is perhaps not surprising that following these events as many as 16,000 militia converged on Boston from New England alone (possibly 30,000 in total), some in shirt-sleeves, many wearing various bits of ancient uniforms, and the majority carrying old flintlocks or muskets. The colonies, divided and disparate though they were, were about to be forged into an uncomfortable union through the heat of war.

xxxxxThe Battle of Bunker Hill, fought in June 1775, was the first major engagement of the war. The Americans planned to drive the British out of Boston. Crucial to their success, however, was the possession of Bunker Hill and Breed's Hill, two adjoining heights overlooking Charlestown and Boston Harbour. During the night of the 16th June some 1200 Americans, commanded by Colonel William 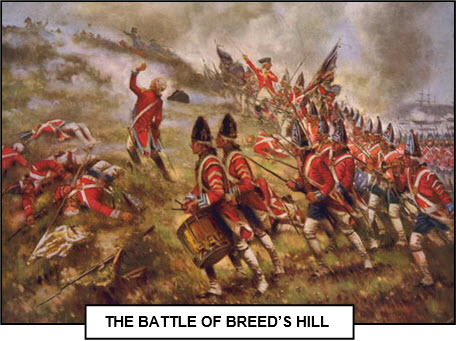 Prescott, occupied Breed's Hill and set about making a wooden redoubt. Later, this force was joined by 300 volunteers. The following day the British commander, General Thomas Gage, anxious to dislodge the colonists from such a commanding position, mustered about 2,400 troops and brought ships to within shelling range. Well supported by naval gunfire, the redcoats then made three assaults upon the height but suffered heavy casualties. Only at the third attempt, when the American troops were forced to withdraw through lack of ammunition, did the British manage to capture their positions and then go on to seize Bunker Hill.

xxxxxIn the course of the battle the Americans lost about 440 men, killed, wounded or taken prisoner, but British loses were well over 1,000, some 40 percent of the assault force. In the circumstances, it was doubtless seen as a necessary price to pay for the retention of Boston, but to the colonists it demonstrated only too clearly that even in a pitched battle, British regular forces could be confronted on equal terms, beaten back, and made to suffer heavy casualties. Indeed, to many colonists the battle was seen as an American victory.

xxxxxBut although the British had managed to keep Boston in their hands, it continued under siege. Then, as we shall see, in March of 1776, the newly appointed American commander, General George Washington, resumed the battle for Boston. He moved guns onto the Dorchester Heights just south of the city, and this threat to the British garrison proved too great. The British commander, General William Howe, was forced to evacuate the port by sea, and take his forces to Halifax in Nova Scotia. 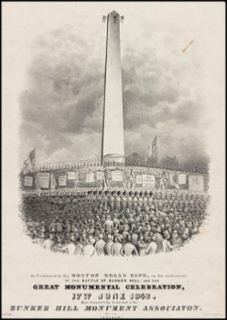 xxxxxIncidentally, it was at the Battle of Bunker Hill that the American commander Colonel Prescott (or his superior General Israel Putnam) gave an order that has gone down in military history: "Don't fire until you see the whites of their eyes". Regardless of who said it, this tactic doubtless contributed to the heavy loses suffered by the British infantry during their assault on Breed's Hill. ......

xxxxx...... Today, an obelisk known as the Bunker Hill Monument stands on Breed's Hill to commemorate the battle. This is somewhat confusing and entitles you to ask: Why is the battle called Bunker Hill when it was actually fought on Breed's Hill? Simply because the Americans originally intended to occupy Bunker Hill, but the ground troops appear to have taken over Breed's Hill by mistake. Nevertheless, in true military fashion, the name given to the battle plan was retained! Illustrated here is the inauguration of the monument in 1843.