xxxxxThe English writer Laurence Sterne began his bawdy, off-beat novel Tristram Shandy in 1659, and completed the ninth and last volume in 1767. Lacking plot or structure, it consisted of a rambling narrative about Tristram's friends and family, illustrated in the main by a string of witty stories and character sketches. It contained a great deal of autobiographical detail, and touched on a whole range of emotions. Introducing such literary figures as Parson Yorick (Sterne himself) and Uncle Toby, it proved extremely popular, but was criticised by some for its crude humour. He also wrote A Sentimental Journey, an amusing and touching account of his travels through France and Italy towards the end of his life. 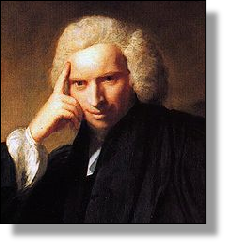 xxxxxThe English novelist and humorist Laurence Sterne, author of the bawdy, off-beat novel Tristram Shandy, was born in Clonmel, Ireland, the son of an English army officer. As a result, for some nine years he led a wandering life, with his family moving from one posting to the next. After attending school at Hipperholme, near Halifax, he went up to Jesus College, Cambridge on a scholarship, and after taking holy orders in 1737, became vicar of Sutton-in-the Forest, north of York, the following year. Shortly afterwards, he acquired the vicarage of Stillington, and was appointed a canon of York Minister, where his somewhat eccentric sermons proved popular. In 1741 he married Elizabeth Lumley, but it was not a successful marriage. As a result, he was involved with a number of other women throughout his life, including Eliza Draper, an affair recorded in his Journal to Eliza of 1767. (The portrait is by the English artist Sir Joshua Reynolds.)

xxxxxHis literary career began in 1759 when, to support his dean in an argument, he wrote a work entitled A Political Romance, later known as The History of a Good Warm Watch-Coat. A satirical attack upon certain church dignitaries, it struck home so well that it was ordered to be burned. On the strength of this, Sterne decided to turn his talent to fiction writing, and later that year the first two volumes of his major work, The Life and Opinions of Tristram Shandy, Gentleman, were published. They were an instant success, and the following year he journeyed to London to enjoy his sudden claim to fame and to produce further volumes. 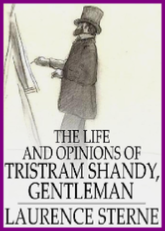 xxxxxThe novel Tristram Shandy - or rather parody of a novel - was devoid of any plot and made no attempt at any kind of structure, but it was packed full of colourful, autobiographical detail. Its musings, be they cynical, sad, hilarious, romantic or sickly sentimental - together with a generous smattering of sexual humour - boiled down to the author's own jumble of thoughts and feelings, his highs and his lows. As such they shocked and delighted London society in equal measure. The work itself was highly successful but, nonetheless, was criticised for its incoherence and lewd humour. The English literary giants Samuel Taylor Coleridge and William Makepeace Thackeray, in particular, complained of its crudity and coarseness.

xxxxxTo a large extent, the books were composed of a string of witty stories and character sketches, and these introduced some memorable literary figures from Tristram's friends and family, like Parson Yorick - depicting Sterne himself -, Corporal Trim, and Uncle Toby, the kindest and nicest of men, modelled in part on his father. Its satire clearly owed much to the French writer François Rabelais and the Irish writer Jonathan Swift, but his approach to fiction, in which the characters of his creations were formed by their inconsequential ramblings rather than shaped by external events, was revolutionary. This "interior monologue", as it has come to be called, was the means whereby the novelist enabled the reader to get inside the minds of his creations. This technique, which later came to be known as the "stream of consciousness" (flow of thoughts) - a term coined by the American psychologist William James in 1890 - was to be put to good use by such avant-garde 20th century authors as the Irishman James Joyce and the English woman Virginia Woolf. 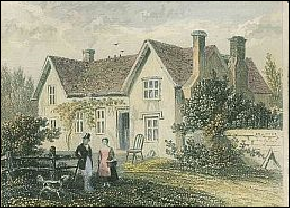 xxxxxIn 1760, following a second edition of the first two volumes, the "naughty Tristram Shandy", as Sterne came to be called, returned to the north, taking over another parish at Coxwold. Here in a delightful old house he named "Shandy Hall" (now a museum) he carried on writing additional volumes to his masterpiece, returning south in the winter time to mix with London's high and low society. Then in 1762, after a serious bout of tuberculosis, he went to live in Toulouse, France, together with his wife and daughter. He stayed there for a number of years, and his travels on the continent provided the material for his last work. He eventually returned to London alone and died in his lodgings in Old Bond Street in March 1768. 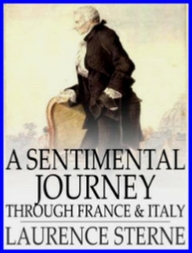 xxxxxSterne's colourful, rambling narrative about his comic gentleman hero Tristram Shandy , stretching to nine volumes and completed in 1767, is now regarded as one of the great masterpieces of 18th century English fiction. Other works by him included three collections of his sermons under the title The Sermons of Mr. Yorick. The first was published in 1760, and was popular enough, but following his instant success with Tristram Shandy, the two other collections, published in 1766 and 1769, were snapped up! He is also remembered for his Sentimental Journey, an amusing and oft-times sensitive account of his travels in France and Italy. Only part of this work appeared before his death, and his collection of letters was not published until 1775.

xxxxxIncidentally, soon after burial, Sterne's body was stolen by grave diggers and taken to Cambridge. It was recognised, however, when used for an anatomy lecture, and the body was returned to its grave. In 1969, 200 years after his death, the remains were exhumed and laid to rest in the churchyard at Coxwold, close to his beloved home, Shandy Hall.

xxxxxThe contemporary Scottish writer, Tobias Smollett, unlike Sterne, conformed to the format of the novel, clearly influenced by the works of the English writer Henry Fielding and the French writer Alain-René Lesage. Specialising like them in picaresque novels - wherein a lovable rogue faces many adventures but triumphs in the end - he wrote a number of works based on his time as a ship's surgeon in the Royal Navy. These included The Adventures of Roderick Random of 1748, and The Adventures of Peregrine Pickle in 1751. These were fast, rip-roaring tales written in a satirical vein, and giving a picture of life in the raw. His last and best novel was The Expedition of Humphry Clinker, 1771, a series of letters telling of the comic adventures of a family as they travel through England and Scotland. Full of incident and introducing a host of eccentric, larger than life characters, it anticipated the writings of the English novelist Charles Dickens. He also wrote poems, plays and travel books, plus A Complete History of England. 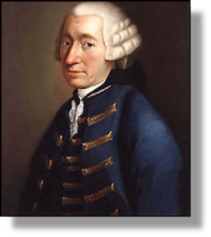 xxxxxA contemporary Scottish writer who, unlike Sterne, conformed to the format and spirit of the novel, was Tobias Smollett (1721-71). He specialised in the picaresque novel which tells of a lovable rogue and adventurer who, in his wanderings, faces much hardship but triumphs in the end. As we have seen, such works were produced by the English novelist Henry Fielding and the French writer Alain-René Lesage, both of whom had a marked influence upon the style and structure of Smollett's writings.

xxxxxHe produced his finest work, The Expedition of Humphry Clinker, three years after Sterne's death in 1771. Written mostly in Italy, it tells by means of a series of letters the adventures of a family as they travel through England and Scotland. The comic incidents it records and the farcical, somewhat larger than life characters who emerge along the way, make it a memorable and enjoyable journey. 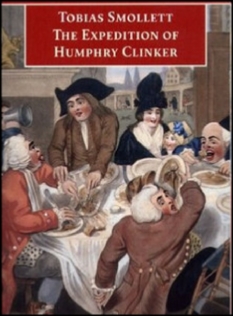 xxxxxHis broad-brush creations like squire Matthew Bramble, an irritable hypochondriac, Tabitha, his sour faced sister, and Lismahago, a soldier of fortune, anticipate the characters of the English writer Charles Dickens and, indeed, had an influence in that direction. Two English writers in particular sang the work’s praises. William Makepiece Thackeray considered it the most laughable of stories, and Sir Walter Scott regarded it as the most pleasing of Smollet's novels.

xxxxxHe was born in Cardross, Dumbartonshire, went to school in Dumbarton, and studied medicine at Glasgow University. However, having always been keen upon a literary career, he travelled to London at the age of 18 to try his hand at writing. But his tragedy The Regicide got nowhere, and he was obliged to make his living elsewhere. He joined the navy in 1741 and became a surgeon's mate. He served in the war against Spain, and then left the service in 1744 and began practising as a surgeon in Downing Street, London.

xxxxxIt was at this point, however, that he turned again to writing and, basing his first novel on his experiences in the navy, produced The Adventures of Roderick Random in 1748, a satirical and raw account of a young man's life in London and the navy. Action-packed and pulling no punches, it was an instant success. Not surprisingly, Smollett followed this up with three more colourful, rip roaring novels in satirical vein: The Adventures of Peregrine Pickle, Ferdinand Count Fathom, and Sir Lancelot 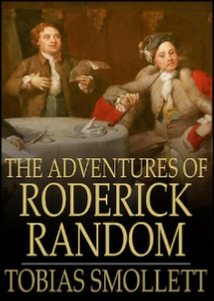 xxxxxDespite these publications, however, Smollett was often in financial difficulties, being heavily fined and sent to prison for libel on one occasion. Furthermore, though quick to anger, he was a generous man by nature, lending money to those in need and, at one period of his career, providing food and beer on a Sunday for his "unfortunate brothers of the quill". He had therefore to continue as a hack writer, composing pieces of poetry, producing travel books, and writing one or two plays. He was at one time editor of two political journals, The Critical Review and The Briton, and in 1756 had a modicum of success with his A Complete History of England. He also earned money by translating two novels into English, Gil Blas by the French writer Alain-René Lesage, and Don Quixote, the famous work of the Spanish writer Miguel de Cervantes. But an earlier work in which he criticised the spa water at the health resort at Bath made him little money and plenty of enemies. However, he could number among his literary friends Oliver Goldsmith and Samuel Johnson.

xxxxxLike Sterne, he suffered from tuberculosis and settled on the continent towards the end of his life. In 1763, following the tragic death of his 15 year old daughter, he went with his wife to live at Nice, and returned in 1766 to start work on The Expedition of Humphry Clinker. Then two years later he made his home at Pisa, and it was in Italy, near Livorno in Tuscany, that he died in 1771. 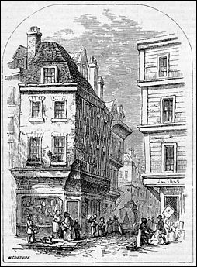 cidentally, inxhis Humphry Clinker, Smollett paints a realistic picture of a dinner party in Grub Street, London. This street, originally known as Moorfields, was where the literary "hacks" - needy writers who wrote for hire - used to hang out. Work produced by such hacks was often hastily penned and mediocre in standard, and was thus referred to as "grubstreet". ...…

xxxxx...... As we have seen, Smollett himself was often obliged to produce hackwork. One of his poems, however, The Tears of Scotland, written after the defeat of the Jacobites at the Battle of Culloden in 1746, was well above the standard associated with Grub Street.