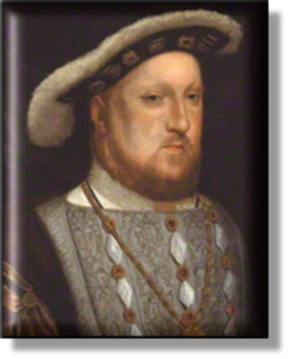 xxxxxHenry VIII is probably the best known of English kings, if only because of his six wives and how he disposed of some of them! This portrait of him is by the German artist Hans Holbein. The major event of his reign was undoubtedly the Reformation - a movement aimed at reforming the Roman Catholic Church which ended up with a Protestant break-away. Started on the continent - initially by Martin Luther - Henry added considerably to the movement in 1534 when, having been excommunicated by the pope, he formed the Church of England and put himself as the supreme head.

xxxxxIt must be noted, however, that this break with Rome was one of convenience. Henry was not a Protestant at heart. Indeed he had written a treatise attacking Luther in no uncertain terms, and his Statute of Six Articles, issued in 1539, upheld the basic tenets of the Roman Catholic faith. Thus while leading Catholics like Thomas More were being executed for refusing to recognise his leadership of the English Church, Protestants were being put to death for refusing to abide by the Six Articles! 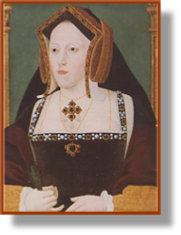 xxxxxIn England, the Reformation was the result of Henry's need to safeguard the succession. His first wife, Catherine of Aragon (illustrated) had given birth to a son in 1512, but the child had died within months. He sought a divorce and when his trusted Cardinal Wolsey failed to obtain it, he sacked him and took what he saw to be the only course open to him. It worked. His Archbishop, Thomas Cranmer, sanctioned the divorce, despite papal opposition, and Henry married his second wife, Anne Boleyn. She bore him a daughter, and when she fell from favour, his third wife, Jane Seymour, gave him the son he so desperately needed. Furthermore, his break with Rome, confirmed by the passing of the Act of Supremacy in 1534 - the work of his new Chancellor Thomas Cromwell - brought some fringe benefits. As head of his own Church, he now decided to dissolve (close down) all the Roman Catholic monasteries and nunneries. He seized their treasures and confiscated their land. Churches too were ransacked and deprived of their valuable statues and ornaments.

xxxxxHenry needed the money. He was determined to build a strong navy. This would be costly, but he knew that at some time the powerful Roman Catholic states, Spain and France, would be seeking to bring England back into the Catholic fold. In addition, Henry was a great spender on the good life. A larger-than-life character, confident and high-spirited, he was quickly getting through the money his father had so carefully hoarded. 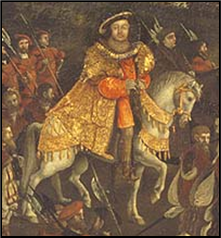 xxxxxIn the early years of his reign Henry pursued an active foreign policy, advised in the main by Cardinal Wolsey, and for a time this certainly improved England's standing among the other European states. Taking advantage of the rivalry between Francis I of France and the Holy Roman Emperor Charles V, England was able to hold out the promise of support to either monarch, thus gaining an importance beyond the nation's true status. In 1513, during a campaign in northern France the English gained a victory over the French at the Battle of the Spurs, and followed this up with a crushing defeat of the Scots (allies of France) at the Battle of Flodden. Thusxwhen Francis I came to the throne two years later he felt it necessary to seek Henry's favour. In 1520 the two monarchs met on the "Field of the Cloth of Gold" near Calais (illustrated), where they staged a magnificent display of friendship. The very next month however, Charles met Henry at Gravelines near Calais, also anxious to keep on good terms with England. This delicate balancing act collapsed completely, however, when in 1522 Henry decided to come down on the side of the Emperor. Three years later, Charles roundly defeated the French at the Battle of Pavia and English support was no longer needed or, more to the point, valued.

xxxxxAs a young man, keen on sport, well-educated, and highly patriotic, Henry had gained much public support and affection, but towards the end of his reign his popularity waned. He embarked once again on military campaigns and, despite a victory over the Scots at Solway Moss in 1542 and some success against the French, these wars proved costly. Furthermore, the execution of loyal subjects and friends, like Thomas More, together with his ruthless suppression of the Pilgrimage of Grace - a rebellion in 1536 - lost him a great deal of support. And personally, his later years were clouded by serious illness. He became bloated and disfigured, and this significantly tarnished his earlier image.

xxxxxIt must be said, however, that for most of his reign he showed himself to be an astute administrator and, as a result, the power of the crown was considerably increased. He was a harsh man, even judged by his own times, but as a man of culture and learning he entertained scholars and artists, including the painter Hans Holbein the Younger, and can rightly be regarded as a true Prince of the Renaissance. 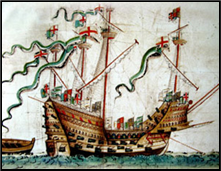 xxxxxIncidentally, Henry's naval programme, aimed at building a fleet of fighting ships armed with powerful cannons, received a set-back in July 1545 with the sinking of the Mary Rose, the pride of his fleet. The king witnessed the tragedy while watching his ships sail out of Portsmouth harbour to do battle with a French fleet moving up the Solent. The cause of the accident is not known, but it is believed that the ship was caught by a sudden gust of wind, some of the guns broke loose, and the ship heeled over, sinking within a minute. The shipwreck was located in 1971 and raised in 1982. It is now on display at Portsmouth harbour, together with Nelson's flagship, the Victory. It is well worth a visit.