xxxxxAs we have seen, Selim I defeated the Safavids of Iran at the Battle of Chaldiran in 1514 and then the Mamluks, first in Syria and then Egypt in 1517, thereby doubling the size of the Ottoman Empire. Under his son, Suleyman I, the empire reached the height of its power. He seized the island of Rhodes from the Knights of St. John, and then conquered most of Hungary by the Battle of Mohacs in 1526. However, his attempt to take Vienna failed, and he turned his attention to easier conquest, overrunning Mesopotamia and the north coast of Africa. Then in 1538 his navy roundly defeated an allied European fleet at the Battle of Preveza, and the Ottomans gained control of the eastern Mediterranean. Later, however, as we shall see, when he attacked the island of Malta in 1565 (L1) he met his match. This time the Knights of St. John got the better of him. 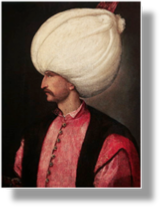 Suleyman’s father, Selim I, had subdued the Safavids of Iran at the Battle of Chaldiran in 1514 and then, by decisive victories over the Mamluks, first at Marj Dabiq, north of Aleppo, and then at Raydaniyah, near Cairo, in 1517, had doubled the size of the Ottoman Empire with the acquisition of Egypt, Syria, the Lebanon, and Palestine. It was now left to his son to increase yet further the empire’s boundaries. Under him the Ottomans reached the height of their power.

xxxxxBecoming Sultan in 1520, Suleyman lost no time in continuing his father’s campaign of conquest. In 1522 he seized the Aegean island of Rhodes from the Knights of St. John and then, having already taken Belgrade in 1521, began his conquest of Hungary in earnest. In 1526 he eventually confronted the Hungarians and, at the Battle of Mohacs, fought in August of that year, he won a resounding victory. The Hungarian army under King Louis II, some 25,000 strong, was virtually annihilated by a Turkish force of about 10,000 men. It is estimated that some 14,000 Hungarians were killed, including their king. The following month the Turks advanced on Buda and sacked the city. 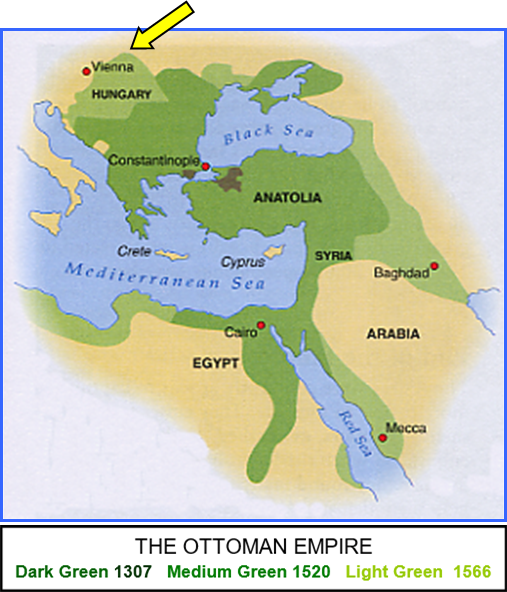 xxxxxThis Ottoman victory virtually marked the end of the medieval kingdom of Hungary, though it took a number of subsequent campaigns by Suleyman to bring the country to heel. Eventually most of Hungary was made into a Turkish province - and destined to remain so until 1686. Only the north-west of the country remained in the hands of semi-independent Hungarian princes.

xxxxxIt was during one of these later sorties into Hungary that Suleyman ventured further into central Europe. In 1529 he laid siege to Vienna, then capital of the Habsburg dynasty (arrowed on map), but he was unable to take the city and this brought a halt to his European advance. Seeking easier conquest, he then overran Mesopotamia (Iraq) in 1534, and began a series of campaigns against the Arabs by the end of which he had conquered most of North Africa and seized the port of Aden on the Red Sea.

xxxxxHaving conquered the island of Rhodes in 1522, Suleyman now saw the need to challenge Habsburg power throughout the Mediterranean. Forxsome years the Habsburg navy, under its able commander the Genoese seaman Andrea Doria (1466-1560), had been attacking Ottoman ships and, by cutting off their sea lines between Istanbul and Alexandria, had prevented thousands of Muslim pilgrims from reaching Medina and Mecca. Likewise the Hospitallers or Knights of St. John, having been relocated to the island of Malta in 1530 after being expelled from Rhodes, were constantly launching attacks upon Ottoman shipping and bases along the North African coast. 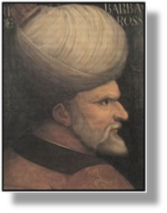 of a large pirate fleet under the command of a Turkish captain called Kair-ed-Din (known as Barbarossa). (illustrated). Under his leadership a powerful Turkish fleet was built up, and this assisted in capturing Algiers, conquering Tunisia and launching attacks upon southern Italy. The inevitable clash between the two commanders, Doria and Barbarossa, came in 1538 at the Battle of Preveza off the Albanian coast. Here a fleet of the “Holy League” - summoned by Pope Paul III - was roundly defeated and the triumphant Ottomans gained command of the eastern Mediterranean. But, as we shall see, when Suleyman cast his eyes westward in 1565 (L1), and attempted to take the port of Valetta on the island of Malta, his army and fleet came up against the Knights of St. John again. This time, fortunes were reversed.