xxxxxThe Italian Gerolamo Cardano produced a number of works on medical matters, but he was also a brilliant mathematician. In 1545 he published his Great Art, a milestone in the development of Algebra. In this, he put forward the algebraic solution of the cubic equation as well as that of the quartic equation, discovered earlier by his pupil Lodovico Ferrari. His Book on Games of Chance was the first known study on the theory of probability, a theory later formulated by the French mathematician Blaise Pascal. 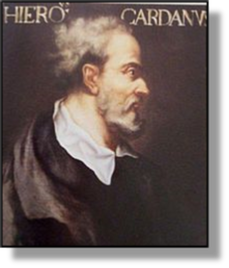 xxxxThe Italian Gerolamo Cardano was educated at the University of Pavia and Padua, but having gained a medical degree, spent some time lecturing in mathematics. He was admitted to the college of physicians in 1539, however, and his progress was such that by 1543 he was professor of medicine in his home town of Pavia. He produced a number of works on medical matters, one in which he gave the first clinical description of typhoid fever.

xxxxxBut it would seem that his first love was mathematics. He wrote two books on arithmetic equations, based on his lectures, but it was his Great Art, published in 1545, that proved a milestone in the development of algebra 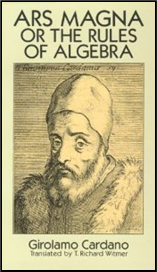 and helped to stimulate greater interest in this particular branch. In this, the first competent Latin treatise on the subject, he put forward not only the algebraic solution of the cubic equation - which had been rediscovered by Niccolo Tartaglia ten years earlier - but also the solution to the quartic equation, discovered by his former servant and pupil Lodovico Ferrari.

xxxxxHis Book on Games of Chance was the first known study on the theory of probability - a theory later formulated by the French mathematicians Blaise Pascal and Pierre de Fermat - and it proved of practical use. In addition, he also wrote on astronomy, astrology and physics. The death of his favourite son in 1560 - executed for murdering his wife - was a blow from which he never really recovered. Two years later he was appointed professor at Bologna University but, in 1570, having published a horoscope of Jesus, he was imprisoned for a short while on a charge of heresy, and he lost his job as a result.

xxxxxThe Italian mathematician Niccolo Tartaglia (c1499-1557), was the man who gave Cardano the algebraic solution of the cubic equation. He also put his knowledge to practical use on the battlefield, probably the first mathematician to do so. In his Nova Scientia of 1537, for example, he attempted to trace the trajectory of a missile, and suggested methods by which gunnery could be improved. Other works included a Treatise on Numbers and Measures and a translation of Euclid's Elements. 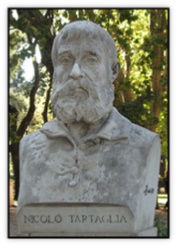 xxxxxAs noted above, it was the Italian mathematician Niccolo Tartaglia (c1499-1557) who gave Cardano the algebraic solution of the cubic equation. He was born in Brescia, Lombardy, and after a teaching job in Verona, moved to Venice in 1533. Known as Tartaglia (the "stammerer") because of a speech defect - his real name was Fontana - he was eventually appointed professor of mathematics at the university there.

xxxxxTartaglia's interest in mathematics was not purely academic. He put his knowledge to practical use on the battlefield, probably the first mathematician to do so. In his Nova Scientia, published in 1537, he described new instruments and 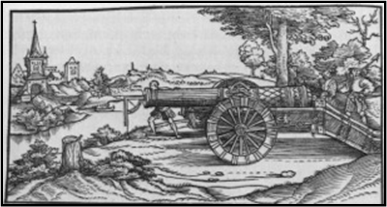 ballistic procedures by which gunnery could be improved, and he attempted to trace the trajectory of a missile based on speed and elevation. In addition, he suggested the disposition of artillery and the type of fortifications which were best suited to various types of terrain. During his career he produced a number of texts on mathematics - notably his Treatise on Numbers and Measures - and in 1543 was the first to translate Euclid's Elements into a European language.

xxxxxIncidentally, when Tartaglia gave Cardano the algebraic solution or root of the cubic equation, it was on the understanding that he should not make it public. Thus when, nevertheless, Cardano published the solution in his Great Art in 1545, a quarrel broke out between the two men. Lodovico Ferrari (1522-1565) took up the case on behalf of his former master and, in a public debate in August 1548 won the case against Tartagalia. His success brought him fame and good fortune. On the strength of it, he obtained the post of tax assessor in Mantua, and in 1565 was appointed professor of mathematics at the University of Bologna.