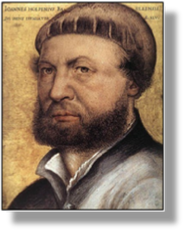 Hans Holbein was born in Augsburg and, as a boy, worked and trained in the large workshop run by his father Hans Holbein the Elder, a recognised artist in the Flemish tradition and an accomplished portrait painter. Showing a remarkable ability at an early age, the young Holbein spent much of his life in Switzerland and England, where, by his design work and portraiture, he came to be regarded as one of the greatest artists of the north European Renaissance. This self-portrait was painted around 1543.

xxxxxToday, he is best known for his portraits - and understandably so - but he was a man of wide and rare talent. His stay in the prosperous town of Basel, for example, where he went to work as a book illustrator in 1515, was to mark him out as an exceedingly fine graphic artist. Employed by a local publisher, he excelled as a woodcut artist and designer. He produced the title pages for Thomas More’s Utopia and Luther’s New Testament, and it was while working on the pen and ink sketches for In Praise of Folly that he met and became a life-long friend of the Dutch humanist Erasmus. But his masterpiece in this field was undoubtedly his exquisite series of woodcuts, some 40 scenes in all, for his macabre Dance of Death in which the dead stalk the living (example given below). Begun in 1523, this work places him alongside the German artist Durer for the impact of its subject and the quality of its design. In lighter vein, the woodcut below is entitled Christ, the True Light of the World, and dates from around 1526.

made designs for jewellery and stained glass, and produced a number of murals, some to decorate the council chamber in the town hall. And it was in the early 1520s that he painted the best of his small number of religious works, including his impressive Dead Christ in the Tomb and his Madonna altarpiece, paintings which, by their composition and richness of colour, suggest the influence of his visit to Italy in 1518.

xxxxxHis skill as a portrait 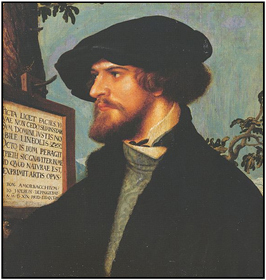 painter was demonstrated as early as 1516 - he was then nineteen - with his Burgomaster Meyer and his wife, and a marked improvement was seen three years later with his dramatic painting of Bonifacius Amerbach, professor of law at the university of Basle (illustrated here). And it was soon after that that he produced his fine portraits of Erasmus, one in particular capturing the warmth and sincerity of the famous humanist (1523). But his finest portraiture was achieved during his stay in England. In 1526 he came to London and, with the assistance of letters of introduction from Erasmus, soon found private work. During his stay of eighteen months he produced portraits of Thomas More and his family, Archbishop Warham (illustrated below) and Bishop John Fox.

xxxxxThen after a short stay in Basel, where 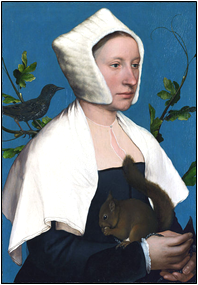 the reformation was set on “purifying” art, he returned to England in 1532 and stayed there for the rest of his life. Very soon, his painting of The French Ambassadors - famous for its distorted skull in the foreground - together with a fine portrait of Thomas Cromwell, impressed the nobility, and in 1536 he was appointed court painter to Henry VIII. He was kept busy! He painted the monarch on several occasions, his son Edward, heir to the throne, and most of the king’s wives, including Anne of Cleves, Henry’s fourth wife, (who cost Cromwell his head!) and Jane Seymour. It is estimated that during the last decade of his life he produced 150 portraits, some of them as miniatures. And the preliminary drawings he made for these paintings were in themselves precious works of art. Over eighty have survived and are now in the Royal collection at Windsor Castle. Illustrated here is Portrait of a Lady with Squirrel and Starling, painted around 1527 (now in the National Gallery, London). 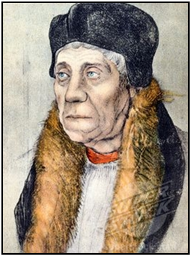 of refinement and the products of a keen sense of observation. Every minute detail is accurately recorded, be it the colour of flesh or hair, the texture of cloth or lace, or the decorative accessories included, such as rings and necklaces. The result was an astonishing realism which, in most cases, provided some degree of insight into the character of the sitter. His main aim, however, was not to provide some sort of psychological study of his subject, but to portray in studied detail the opulent members of court, high society and the rising merchant class. He certainly achieved that. The sketch shown here is of William Warham, Archbishop of Canterbury, and was produced in 1527 as a preparatory sketch for a portrait. It is one of his most brilliant character studies.

xxxxxBecause of his attention to detail, Holbein produced some magnificent miniature portraits, and he was responsible for introducing this type of work into England. These miniatures, examples of which are housed in the Victoria and Albert Museum in London, had a marked influence on the work of Nicholas Hilliard, who became miniature painter to Elizabeth I in about 1570. 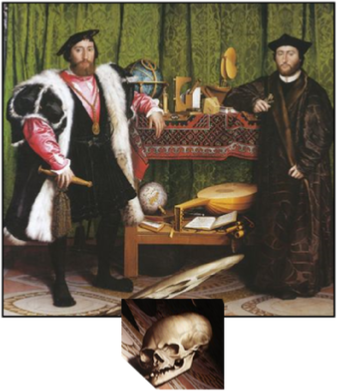 xxxxxIncidentally, Holbein’s famous work The French Ambassadors, mentioned above, has puzzled viewers ever since it was painted in 1533. It shows two well-dressed and clearly cultured men facing the front in confident pose. When looked at from one side of the canvass an elongated skull in the foreground, not discernible from the front, comes into focus. These tricks of distortion (known as anamorphosis) were popular in the 16th century, and often contained a hidden meaning. Here, it is suggested, the symbol of death is reminding the two men that, important and able though they might be, “in the midst of life we are in death”. On the other hand - and far less intriguing - it could simply be a signature. Holbein means “skull” in German! Then again, one of the men, Jean de Dinteville, is known to have used the skull as a personal symbol.

xxxxxShown here (left to right) are four drawings – Henry VIII, The Hands of Erasmus, The Head of a Woman, and Anne Boleyn – and a wood engraving The Dance of Death.

xxxxxThe German painter Hans Holbein was a talented book illustrator, designer and woodcut artist as well as a portrait painter of exceptional ability. For example, he provided pen and ink sketches for In Praise of Folly, the work of the Dutch humanist Erasmus, and he produced a brilliant series of wood-cuts for his macabre Dance of Death. He lived in England as from 1532, and painted several portraits of Henry VIII, most of his wives, and his son Edward. He is famous for his The French Ambassadors - with the distorted skull in the foreground - and his portraits included those of Erasmus (1523) and the English statesmen Thomas More and Thomas Cromwell. His portraits were detailed and realistic, and his miniatures influenced the work of the Elizabethan miniature painter Nicholas Hilliard.