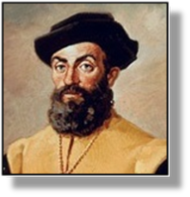 by crossing the Panama Isthmus in 1513 (H8), the Spanish navigator Vasco Nunez de Balboa became the first European to reach the eastern shores of the Pacific. By this date, an eastern route to the Far East around the southern tip of Africa had already been discovered, but as yet no way had been found to reach India and China by voyaging westward. If a strait could be found to reach Balboa’s “Sea of the South”, as he called the Pacific, then the circumnavigation of the globe might well be accomplished.

xxxxxDetermined to reach the East Indies by a 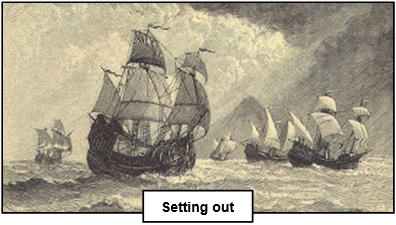 westerly route, the Portuguese explorer Ferdinand Magellan set sail with five Spanish ships in September 1519. He first sailed along the east coast of South America and for three weeks probed the estuary of the Rio de la Plata, thinking it might be a possible route to the west. This wasted journey, together with the cold, bleak conditions and the need to go on half-rations, brought about a serious mutiny. An attempt was made to kill their Portuguese commander, and he was forced to take brutal action. The captains of two of the ships, the Victoria and the Concepcion, were both killed, 40 men were put in chains, and the captain of the San Antonio was put ashore. And it was not until close on five months, with the return of warm weather, that the voyage could be resumed. His fortune then changed. After sailing 300 miles further south he did in fact find the strait he sought, the stretch of water that today bears his name (illustrated below). This led him into the “Pacific Ocean”, so named because, at that time, it appeared so calm.

xxxxxThere then followed an horrific three-month voyage across the Pacific during which food supplies became exhausted and scurvy became rife. The men were reduced to eating rats, while they lasted, and then sawdust and maggots. It was not until they reached Guam in the Marianas that they were able to obtain fresh food. The expedition then sailed on to the Philippines, reaching these islands in March 1521. It was here that Magellan met his death, killed during a skirmish with the natives. It was a tragic end to a voyage that had had its share of both triumph and disaster. The expedition then came under the command of Juan Sebastián Elcano, a former mutineer! By then, three of the five ships had been lost by storm, fire or mutiny, but his own vessel, the battered Victoria, managed to round the Cape of Good Hope and reach Seville in September 1522.

xxxxxIt was in September 1519 that the Portuguese explorer Ferdinand Magellan set sail, determined to find a western route to the East Indies. His five vessels rounded Cape Horn and entered the Pacific, but during the three months voyage across this ocean food supplies ran out and many men died of scurvy. The expedition reached Guam and then the Philippines, and it was then that Magellan was killed during a skirmish with the natives. By this time three ships had been lost through storm, fire and mutiny. However, the new commander, Juan Sebastián del Cano, managed to round the Cape of Good Hope and reach Seville in September 1522. The first circumnavigation of the globe had been accomplished.

xxxxxAlthough Magellan was Portuguese by birth, during this historic voyage he was actually in the service of Spain. He was born of a noble family and, after serving at court, went on a number of expeditions to India and the East Indies. He then served in Morocco where he was wounded in the leg and made permanently lame. In 1514, anxious to search for a western passage to the Far East, he sought the backing of King Emmanuel of Portugal, but when no support was forthcoming, Magellan renounced his Portuguese nationality and offered his services to Spain. The Spanish king, Charles I, financed his expedition and the rest is history.

xxxxxIncidentally, Magellan was the first European to cross the Pacific Ocean and, technically, the first person, along with his Malay slave, Enrique de Malacca, to circumnavigate the globe. Although he only reached as far as the Philippines on his 1519 expedition, he and Malacca had previously sailed from the Philippines to Europe and had thus covered the journey, albeit in two separate voyages!

xxxxxThe Spanish navigator Juan Sebastián Elcano, assumed command following the death of Ferdinand Magellan in 1521, and became the first man to take an expedition around the globe. But the price was high. Of the five ships that left Spain in 1519, only the Victoria made it back, and with just 17 of the original crew of 270. Financially, however, it was a success, opened up a vital new trade route to the Far East, and gained the Philippines for the Spanish crown. And it proved at last that the world was round! 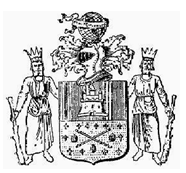 was a Spanish navigator who, originally, was the captain of the Concepcion, one of Magellan's five ships. Following the death of Magellan in April 1521, he assumed command of the expedition and, sailing in the Victoria, reached Seville in September 1522, proving, at last, that the earth was indeed round. To honour his achievement, Emperor Charles V granted him an addition to his coat of arms - a globe bearing the inscription "You were the first to encircle me". He died in 1526 while exploring the west coast of South America.

xxxxxThe price of the expedition in ships and men was high. Of the five ships and 270 men that left Spain in 1519 only the Victoria made it back home with just 17 Europeans and four East Indians aboard. Financially it was a success. The spices brought back more than paid for the cost of the enterprise, and the opening of the Pacific prepared the way for future trade between the New World and the Far East. Furthermore the Spanish slowly gained control of the Philippines and this proved a valuable acquisition when Manila developed into a major trading centre.