xxxxxThe French writer François Rabelais is best known for his satirical comedies, Pantagruel, the story of a young giant, and Gargantua (1534) the fantastic adventures of his equally large father. These and his other works were used to launch a blistering attack upon the shortcomings of contemporary society. Virtually no profession escaped his colourful language and ribald wit, but by such means he made a strong plea for a fairer and freer society. Not surprisingly, his books were condemned for their obscenity, but many people were delighted with them, including the king, Francis I. With his death in 1547, however, Rabelais had to make his escape from Paris and settle abroad. To this period belongs his final work, Quart Livre. He was acquainted with the French poet Joachim Du Bellay, and among writers clearly influenced by him were Laurence Sterne, Honoré de Balzac and James Joyce. 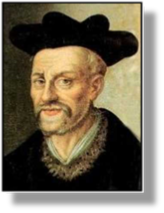 satirical writer François Rabelais is best known for his allegories about the heroic deeds and sayings of two giants, father and son. They appear in four rumbustious works, the first two being the Heroic Deeds and Sayings of the Great Pantagruel, published in 1532, and The Inestimable Life of the Great Gargantua, produced two years later in 1534. He completed his third book, Tiers Livre in 1546, and his fourth and final work, Quart Livre, appeared in 1552. The books are not in sequence - far from it - and the characters Rabelais creates are hardly well-drawn, but it is via them that he gets his message across.

xxxxxRabelais was born in Chinon, Touraine. 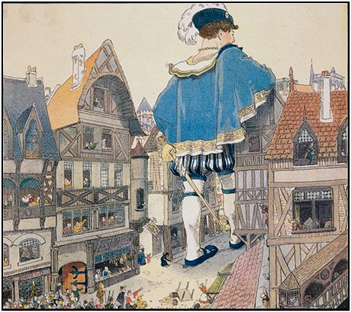 He was educated for the Church and is known to have been a Franciscan and a Benedictine monk. He then went on to study medicine at the University of Montpellier and practised in Narbonne for a short time before taking up a hospital appointment in Lyon. He proved to be a competent physician and, throughout his active life, lectured and wrote on medical subjects. It was during his time at Lyon, however, that he found his true vocation as a writer of comedy and satire. His first major work, Pantagruel, tells the story of a young powerful giant, overflowing with a lust for life - a very Renaissance quality - and this was followed by the fantastic, grotesque adventures of his father Gargantua (seen here in Paris!).

xxxxxBoth books, published under the 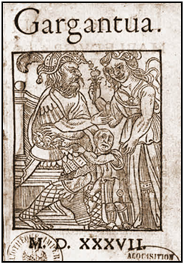 thinly disguised nom-de-plume of Alcofribas Nasier, were roundly condemned by the Sorbonne for their obscenity, but they proved immensely popular with the learned classes. Indeed, we are told that the king of France, Francis I, having had both books read to him, was so delighted with them that he granted a licence for the publication of a third. By this time Rabelais was living in Paris. He completed the third work, known as Tiers Livre, in 1546 but, unfortunately, the king died the following year. Deprived of regal support for such irreverent criticism - and being unable to get the backing of the king’s sister, Marguerite of Navarre - he had to flee to Metz. He was appointed curate of Meudon in 1551, and the following year he published his final work, the Quart Livre. He died in 1553 and was buried in Saint-Paul-des-Champs, Paris.

xxxxxThat this vast, jumble of works should cause 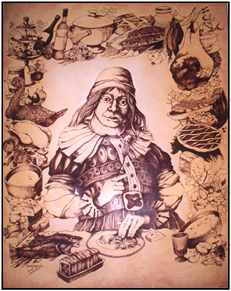 concern amongst the establishment is hardly surprising. Like the English satirist Jonathan Swift (yet to come), he was a brilliant, highly intelligent writer who, armed with a scathing wit and a keen social and political insight, launched a blistering attack upon the weaknesses of contemporary society. Virtually no profession escaped his satirical and critical attention, but monks, lawyers, physicians, pedagogues and politicians came in for the worst of his ribald and colourful language. But it is not all destructive criticism. From out of this fantasy world, full of legends and romances, emerges a search for knowledge and its application. In Pantagruel, for example, he sets out to describe his own idea of Utopia - though he does lean heavily upon Thomas More’s version! - and elsewhere he battles for individual liberty, a purified Church, an enlightened method of education, and the rights of women in society.

xxxxxIn the intolerant times in which he lived, Rabelais only managed to escape imprisonment or worse because of the king’s support up to 1547, and the close, influential friends he managed to keep around him. Among these “protectors” were the cardinal and diplomat Jean du Bellay, with whom he travelled to Italy three times, and his brother, the poet Joachim du Bellay.

xxxxxIncidentally, the adjective “gargantuan” is still used today to imply something of giant size, and the word Rabelaisian now describes any piece of satire which is coarse or downright obscene. Among writers who were clearly influenced by Rabelais - whom Voltaire described as a “drunken philosopher” - are Laurence Sterne, Honoré de Balzac and James Joyce.