xxxxxAs part of the English Reformation, the royal assent to the dissolution of the monasteries was given in 1536. In the first instance over 370 of the smaller houses were closed, and this was followed in 1539 by the closure of the larger ones. All the monasteries were ransacked, monks and nuns were thrown out, and abbots who resisted were executed. A special target for desecration was the shrine of Thomas Becket at Canterbury Cathedral. Many of these properties were then sold off, adding substantially to the Crown coffers, though some of the income was set aside for monastic pensions. 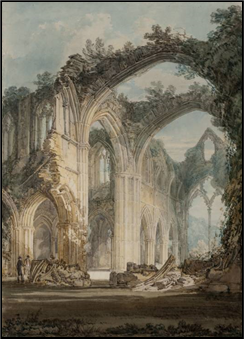 xxxxxIt was in April 1536 that, as part of the English Reformation, royal assent was given to the dissolution (closure) of the lesser monasteries - those worth under £200 a year. Over 370 religious houses were closed, with a value of some £32,000. Closure of the larger monasteries was begun in 1539, and this was accompanied by a wave of iconoclasm (the breaking of holy images). Anything which smacked of the Roman Catholic Church, such as relics, statutes, images and shrines, was destroyed, not only in the monasteries and nunneries, but also in the abbeys and convents throughout the country, and particularly in southern England.

xxxxxFrom pulpits throughout the country monks and nuns were branded hypocrites and sorcerers, and accused of living off the working people. Some abbots resisted - like those of Colchester, Glastonbury and Reading - and were executed for treason as a consequence. A special target for desecration was the shrine of Archbishop Thomas Becket at Canterbury Cathedral. Following his murder on the altar steps in 1170 (H2), the shrine had become a place of pilgrimage for many devout Roman Catholics, as recounted in Chaucer's Canterbury Tales, begun in 1387 (R2). Many of these properties were then sold off, adding substantially to the crown’s coffers, though some of the income was reserved for the provision of monastic pensions.

xxxxxA typical monastery at the time of the Dissolution. 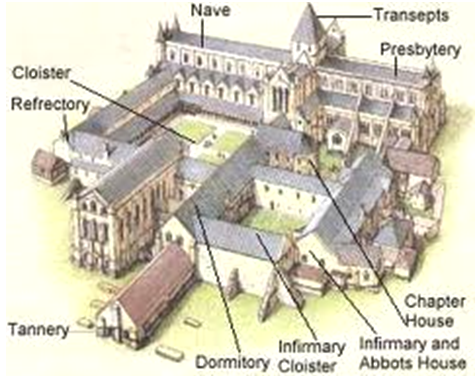