xxxxxThe Dutch humanist Desiderius Erasmus, one of the greatest scholars of the Renaissance, travelled all over Europe, lecturing in the classics and relating them to Christian learning. In England he was a friend of Thomas More, John Colet, Thomas Linacre, Thomas Wolsey and John Fisher. In Italy he came to know the Venetian printer Aldus Manutius. His major work, In Praise of Folly, attacking the shortcomings of society and the Church, was written in 1509. Then seven years later he published his Greek New Testament, together with a parallel text in Latin. He supported Luther's criticisms in principle, but sought reform by gentle reasoning, attacking Luther's methods in his On the Freedom of Will in 1524 and his Hyperaspites two years later. In 1518 his Colloquies discussed contemporary subjects - thus spelling out his liberal philosophy - and his vast amount of correspondence has proved of great historical value. 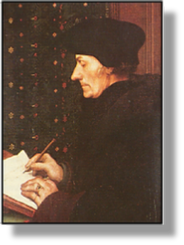 Dutch writer Desiderius Erasmus was one of the greatest scholars of the Renaissance. He was born in Rotterdam in about 1466 and, after a strict upbringing, was ordained a priest in 1492. Then, supporting himself by giving private tuition, he studied philosophy and Greek at the University of Paris. Finding religious life too restrictive for so agile a mind, he began work as a lecturer and tutor, teaching the classics and relating them to Christian learning. This took him all over Europe. He paid four visits to England where he was a friend, among others, of Thomas More (author of Utopia), John Colet, Thomas Linacre, Thomas Wolsey and John Fisher. He lectured at Oxford and was made professor in Greek at Cambridge. He later spent some time in Italy, staying with his close friend the Venetian publisher Aldus Manutius. It was while in Italy that he took a doctorate at the University of Turin.

xxxxxHe was a prolific writer, and his erudition and advanced views on education single him out as the leading scholar and humanist of his day. It was while he was staying with Thomas More in 1509 that he wrote his first major work, In Praise of Folly. This 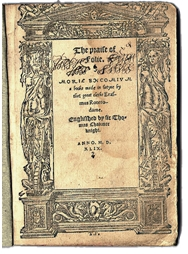 satire quickly became a best seller, attacking as it did the shortcomings of society at large, the monastic orders, and the abuses of church power in particular. Few escaped his sharp wit, be they lawyers, scientists, theologians, kings or princes. Fools, he argued, were to be found everywhere, even in the highest places and including the Court of Rome. Religion, he maintained, was a simple and direct worship “from the heart”, and had no need for dogmatic doctrine. In 1516 he published his Greek New Testament, the first to be printed in this language, and provided it with a parallel text in Latin. For theologians this work is often regarded as his greatest accomplishment, based as it was on new manuscripts.

xxxxxIn the dispute that emerged between Rome and the protestant movement, Erasmus supported Luther's criticisms in principle, but he aimed to reform the church by gentle reasoning and a conveniently large measure of toleration. Unlike Luther and Calvin, his appeal was to the intelligentsia, not the masses, and thus he tended to remain aloof and above the religious troubles that were breaking out at ground level. Much of his writing was critical of the Church, and as such it had an impact on religious reformers, but he denied being a protestant and, indeed, bitterly attacked Luther in his On the Freedom of Will in 1524, and his Hyperaspites two years later. A man of words, not actions, he could not condone the violence of the protesters, but many see him as the man who laid the egg that Luther hatched.

xxxxxAmong his many writings a number deserve special mention. His earlier works include his popular Adages, a collection of Greek and Latin proverbs, written in 1500, and his On the Method of Study, an enlightened treatise on education, produced in 1511. In 1518 he published his Colloquies - a masterly series of conversations on contemporary subjects which spelled out his liberal philosophy. Three years later he was in Basel, Switzerland, editing the writings of the early Christian fathers. Also of value is his enormous volume of correspondence with the leading figures of his day, of which some 1500 letters have survived.

xxxxxIncidentally, the German painter Hans Holbein painted portraits of both Erasmus and Sir Thomas More, and it was partly due to his friendship with Erasmus and the letter of introduction he supplied, that he was able to come to work in the court of Henry VIII.

(1467-1519) was an English theologian. Born in London, he was educated at Oxford University and, becoming a priest in 1496, gained a reputation for his lectures on the Epistles of St. Paul. On a visit to Oxford in 1499, Erasmus was impressed by Colet's scholarship and they became close friends. In collaboration with John Lily they wrote a Latin grammar which was widely used over many years. In 1504 Colet was appointed Dean of St. Paul's Cathedral, London, and, after inheriting a large sum of money on the death of his father, he established the famous St. Paul's School in about 1509. 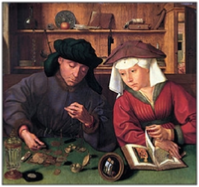 painter Quentin Massys (1466-1530) was the founder of the Antwerp School. He produced religious works, but he is best remembered for his realistic portraits. Among these are one of his friend Erasmus, his Portrait of an Elderly Man, completed in 1513, a study which shows the influence of Leonardo da Vinci, and his The Money Lender and His Wife, painted in 1514 and now in the Louvre, Paris (illustrated). His satirical quality is best seen in his Ugly Duchess (in the National Gallery, London), produced as an illustration for Erasmus' In Praise of Folly. 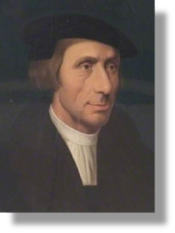 was an English humanist and physician. He was one of the first professors of Greek at Oxford University and this brought him into contact with both Erasmus and Thomas More. He translated into Latin the works of the Greek physician Galen, - a task for which he was uniquely qualified - and as a member of a group of Oxford scholars he played a part in introducing classical thought into English literature. In later life he set up a medical practice in London and was appointed physician to Henry VIII. His claim to fame now rests on the fact that he was the founder and first president of the Royal College of Physicians, a body set up in 1518 to ensure that those practising medicine had some knowledge of their subject. Two years later Linacre left the medical profession (as it might now be called) in order to become a Roman Catholic priest.