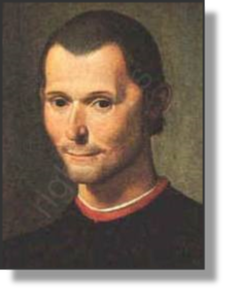 xxxxxNiccolo Machiavelli was the Italian politician and writer whose claim to fame rests mainly upon his chief work, The Prince, written in 1513. Produced as a treatise on how - by foul more than by fair means - a ruler is able to advance his political power and that of his state, the book has made the name Machiavelli synonymous with the cunning and ruthlessness - the political machinations - required by the successful despot.

xxxxxSuch a reputation is not wholly justified. The writing of The Prince - with its argument that the end justifies the means - must be seen against the political background of Italy at this time. Four city states - Florence, Milan, Venice and Naples - were engaged in a bitter, vicious battle for supremacy, whilst the peninsula itself was the scene of a running conflict between the Papacy, France, Spain and the Holy Roman Empire. It was not the age for political niceties! Furthermore, in his Dialogues on the first Ten Books of Livy, completed in 1521 - in which he writes about the government of a republic as opposed to a city state or principality - he does come out in favour of a loose form of democracy based on that of ancient Rome. And in both works he calls for the safeguarding of the citizen’s property, liberty and traditions, and the improvement of his material well-being.

xxxxxMachiavelli was born in Florence. He entered government service as a clerk in 1494 during the rule of Girolamo Savonarola, but made rapid progress and was appointed second chancellor to the republic four years later. As the senior civil servant in charge of diplomatic negotiations and national defence, he took part in a number of missions abroad and within Italy and, as a consequence, met many of the most powerful leaders of the day. In 1512, however, when the Medici family returned to power, he was arrested on a charge of conspiracy, tortured, and exiled to the country in 1513. It was in that year that he wrote his guide, giving instructions as to how a prince - hopefully the one who would one day unite Italy - should govern his state in order to acquire and maintain absolute power.

xxxxxThe Prince was based to a large extent 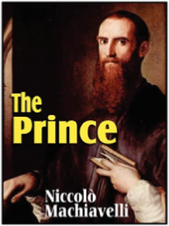 upon Machiavelli’s personal observation of the unscrupulous soldier Cesare Borgia. As noted earlier (1493 H7), it was while acting as an ambassador at Cesare’s camp that he was able to observe at first hand the character of the man he was to dub his “Prince”. Indeed, in 1502 he was a witness to Cesare’s treachery and the killing of his principal opponents at Sinigaglia castle, an incident he later described in his On the Manner Adopted by the Duke of Valentino to Kill Vitellozzo. He saw such action as necessary in certain circumstances:

“A prince, and especially a new prince, cannot observe all those things which are considered good in men, being often obliged, in order to maintain the State, to act against faith, against humanity and against religion.”

xxxxxAnd he also came out strongly

against hired troops or mercenaries, regarding them as “useless and dangerous” and lacking in loyalty. A State must have home-grown armies which are prepared to fight for their families and their possessions.

xxxxxHis other works included The Art of War (1520), in which, as a military theorist, he advocates less dependence on mercenary forces and the forming of a national, patriotic army; a history of Florence up to 1492; and two comedies, Clizia and The Mandrake, satires on the corruption in contemporary society, particularly in the Church.

xxxxxThe Florentine politician and writer Niccolo Machiavelli is best known for his work The Prince, written in 1513 and based to a large extent on his personal observation of the unscrupulous soldier Cesare Borgia. Because of this treatise, the name Machiavelli has come to represent the cunning and ruthlessness required of a successful despot. This is basically justified, but the work must be seen against a background of warring city states in Italy, and a running battle between the Papacy, France, Spain and the Holy Roman Empire. There was little room for political niceties. But in fact his Dialogues on the first Ten Books of Livy, completed in 1521, did come out in favour of a loose form of democracy within a republic, together with safeguards for the rights of the citizen. His other works included The Art of War, a history of Florence, and two satires on the corruption in contemporary society.