xxxxxThe English religious reformer William Tyndale was the first to publish any part of the bible in English. He began translating the New Testament in 1525, and completed it the following year. He then went on to translate the Pentateuch, the first five books of the Old Testament. His translation of the bible helped form the Authorised or King James Version of 1611. He was converted to Protestantism by Martin Luther, whom he met in Germany, but he quarrelled violently with the English humanist Thomas More. He was eventually imprisoned for his heretical views and, in 1536 was strangled and burned at the stake. By this time some 50,000 copies of his New Testament had been printed. 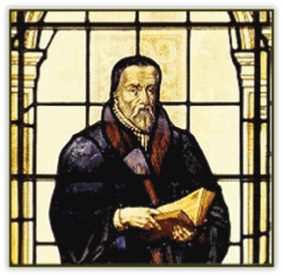 William Tyndale is best known as a translator of the bible. The publication of his New Testament, translated from Greek, was begun in Cologne in 1525 and completed in Worms a year later. It was the first time any part of the bible had been published in English. He then went on to translate the Pentateuch (the first five books of the Old Testament).

xxxxxTyndale was born in Gloucester and educated at Oxford University. Then, after being ordained in 1515 and studying at Cambridge University, he travelled to Germany were he met Martin Luther and was won over to his protestant views.

xxxxxHis version of the Bible, together with earlier translations by John Wycliffe, was later to form the basis of the 1611 text, known as the Authorised or King James Version. In his own time, however, when 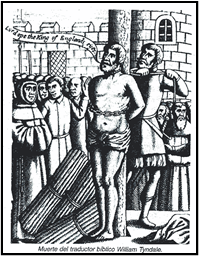 his translation arrived in England 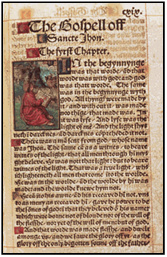 it was condemned by the Church authorities and copies were confiscated and burnt in St. Paul’s Churchyard. His tracts in support of the English Reformation were likewise condemned and he became involved in a bitter and damaging dispute with the English humanist Thomas More. He was eventually taken into custody in Antwerp for his heretical views and after an imprisonment lasting sixteen months, he was tried, found guilty, and then strangled and burned at the stake at Vilvorde near Brussels, in October 1536. At the time of his death, aged 44, it is estimated that some 50,000 copies of his New Testament had been printed.

xxxxxIncidentally, Tyndale was responsible for introducing a number of well-known phrases into the English language, including “God forbid” and “filthy lucre”.

xxxxxThe English preacher Miles Coverdale (1488-1569) assisted Tyndale in his translation of the Pentateuch. Because he spoke out against some aspects of Roman Catholicism he had to flee to the continent and it was here, at Antwerp, that he produced the first complete English bible in 1535. Four years later, at the instigation of Thomas Cromwell, he edited the Great Bible, a copy of which was sent to every parish in England to reinforce the Reformation. He had to take refuge on the continent again during the reign of the Catholic Queen Mary, but returned in 1559 and gained a reputation for his powerful preaching.

xxxxxIn his translation of the Pentateuch, begun 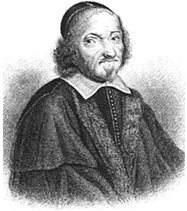 in 1529, Tyndale was assisted by another English translator of the bible, Miles Coverdale (1488-1569). He had started his religious life as an Augustinian friar in Cambridge, but influenced by his prior, Robert Barnes, he left the Order and started to preach against certain aspects of the Roman Catholic faith, notably the confession and the worship of images. In 1528, to avoid persecution, he fled to the continent and it was at that time that he worked with Tyndale, probably in Hamburg. He then went to Antwerp where, working on his own, somewhat looser translation, he produced the first complete English bible in 1535.

xxxxxIn 1539, at the instigation of Thomas Cromwell, he edited the Great Bible (so called because it had bigger pages than usual), and it was a copy of that book, based largely upon his own translation and that of Tyndale, that was sent to every parish church as a means of reinforcing the English Reformation. A year later, following renewed attacks upon Protestants, he left England, but returned during the reign of Edward VI and in 1551 was appointed Bishop of Exeter. Danger returned, however, with the accession of the Roman Catholic Queen Mary, and he was once more forced to take refuge on the continent, going first to Strasbourg and then settling in Switzerland. He was finally able to return to England in 1559, and during his remaining ten years gained a reputation as a brilliant preacher. 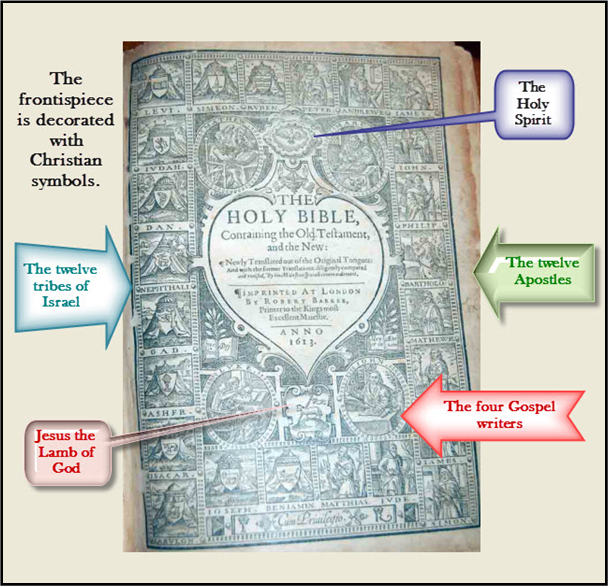 xxxxxIncidentally, in the 1550s, under the general direction of Coverdale, John Knox and John Calvin, a group of Protestant scholars who had been exiled from England worked on a new, so-called Geneva Bible (often referred to as the “Breeches Bible”). The New Testament was published in 1557 and the Old Testament three years later, and it was then brought to England and printed in 1576 during the reign of the protestant Queen Elizabeth I. It proved very popular and quickly replaced the Great Bible which was then in general use and in which, as we have seen, Coverdale had also had a hand.

xxxxxIt was known as the “Breeches Bible” because in its translation of Genesis 3.7 it describes how Adam and Eve made “breeches” to cover their nakedness - instead of the previous “loincloth” or “apron”. The modern version reads: And the eyes of them both were opened, and they knew they were naked; and they sewed fig leaves together, and made themselves aprons (or girdles). Because of its popularity, the Geneva Bible then went on to have an important influence on the translation of the King James Version of 1611.