xxxxxThe German physician and scientist Georgius Agricola published his On Natural Fossils in 1546, the first treatise on mineralogy. In it, he classified "fossils" (any object dug out of the ground) and gave details of each item, some of which were previously unknown. His interest in mineralogy began in 1527 when he worked as a physician in the mining town of Joachimsthal. He wrote no less than seven books on the subject, including his masterpiece On Metals, a valuable, illustrated textbook which assisted mining engineers and surveyors over the next two centuries. A cultured man, he was a life-long friend of the Dutch humanist Erasmus. He is regarded today as the father of mineralogy. 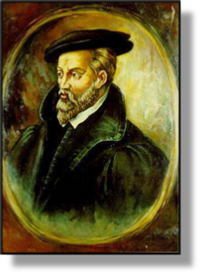 xxxxxOn Natural Fossils, the work of the German physician and scientist Georgius Agricola in 1546, was the first textbook on mineralogy and made an outstanding contribution to this subject. It not only classified various kinds of rocks, organic remains and minerals ("fossil" at that time meant any object dug out of the ground), but it also provided detailed information about each mineral recorded, some for the first time. 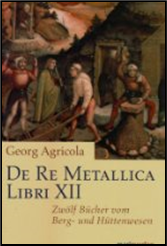 xxxxxBorn Georg Bauer (Agricola was the Latinized form of his name), he was educated in the classics and taught Latin and Greek before studying medicine at the universities of Bologna, Padua and Venice. In 1527 he began practising in Joachimsthal, a mining town in the former state of Czechoslovakia, where he became fascinated by all aspects of the metallurgy industry. Over the next twenty-five years he wrote no less than seven books on all aspects of the subject, his final work De re metallica (On Metals) proving to be his masterpiece. Published after his death in 1556, and containing nearly 300 excellent woodcut illustrations, this work dealt with mine construction, the use of waterpower, and the various methods of smelting. As such it became a valuable textbook for mining engineers and surveyors over the next two hundred years. 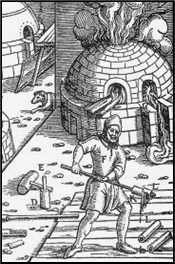 xxxxxA cultured man, he met the Dutch humanist Erasmus while in Italy and they became life-long friends. Erasmus was impressed with Agricola's wide range of ability, and in 1530 agreed to write a forward to Bermannus, his first book on mining and metallurgy - an honour shared only by four other scholars. He can rightly be regarded as the Father of Mineralogy, but he also produced a number of works on medicine, and in 1529, although not deeply interested in politics, wrote a popular Turkish Speech, calling for political and religious unity. At the time of his death he was mayor of Chemnitz, where he had worked as the city's physician since 1533.

xxxxxIncidentally, his masterpiece, De re metallica, although published in 1556, was not translated into English until 1912. The translation was the work of the mining engineer Herbert Hoover and his wife. Hoover - destined to become President of the United States - held Agricola in high esteem, regarding him as the first scientist to found his work on research and observation rather than "fruitless speculation". 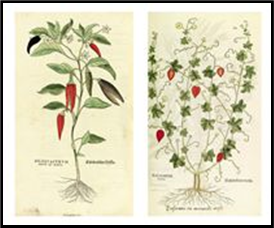 xxxxxAnother German who brought order out of chaos - but in a different discipline - was the botanist and physician Leonhard Fuchs (1501-1566). His Historia Stirpium (History of Plants), published in 1542, was an impressive catalogue of plants which proved an important landmark in the study of natural history. In this work, plants were listed alphabetically and each was given a detailed account as to its form, habitat and special features. In addition, his excellent woodcuts provided accurate illustrations for purposes of identification, and a glossary was included in order to explain technical terms.

xxxxxFuchs studied medicine and was later appointed professor in this subject at Tubingen. He originally started compiling his botanical work because of his interest in the medical properties of plants. In recognition of his contribution to the study of botany, the flowering plant Fuschia was named after him.

xxxxxAnother outstanding German at this time was the botanist Leonhard Fuchs (1501-1566). His Historia Stirpium of 1542 gave an alphabetical list of plants and was illustrated by a large number of excellent woodcuts. In recognition of his work, the flowering plant Fuschia was named after him.