xxxxxThe Swiss physician and scientist Parcelsus rejected the idea that sickness was caused by the imbalance of four "humours". He argued that wounds must be kept clean and left to heal naturally. He was the first to identify silicosis as an occupational hazard, he found a successful treatment for syphilis, and even anticipated the value of inoculation. He led an eventful and turbulent career, and in 1536 gained fame and notoriety by his outspoken views in The Great Surgery Book, a work which greatly advanced medical knowledge and pioneered the role of chemistry in medicine. He died in mysterious circumstances. 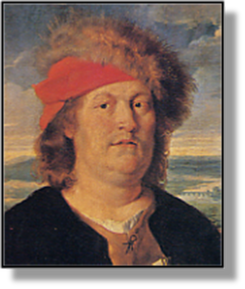 xxxxxParacelsus was the adopted name of a Swiss physician and scientist, born in Einsiedeln in the canton of Schwyz. Like Vesalius he placed great value on scientific observation and experimentation, and his research led him to reject the contemporary view that sickness was caused by an imbalance of the four "humours" - blood, phlegm and yellow and black bile. He was convinced that an external agency was the source of infection. As a result, he argued that wounds must be left to drain and be kept clean so that the healing process could be taken over by nature. Indeed, he even anticipated inoculation and the modern science of homeopathy by suggesting that, given in small doses, "what makes man ill can also cure him".

xxxxxDue to the thoroughness of his research he made some important advances. He was, for example, the first to identify silicosis as an occupational hazard (and not due to evil mountain spirits!), and to find a successful treatment for syphilis. He was also amongst the first of his profession to appreciate the value of chemicals and minerals in the field of medicine. It was he who introduced the use of laudanum as a pain-killer. In such work he was assisted by his interest in alchemy and his experiments in this field produced new substances, including non-toxic compounds. He also showed an interest in psychiatric treatment, and for his work in this field was later to earn praise from the 20th century psychiatrist Carl Jung. 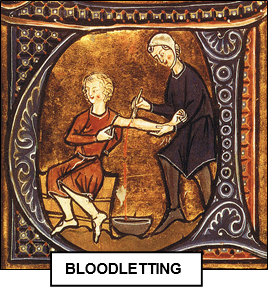 xxxxxHis was an eventful, turbulent career. He travelled widely, including England, Russia, Egypt and the Holy Land, and studied at a number of universities. He worked for a time as a military surgeon, and in 1527 became professor of medicine at Basel. His appointment did not last long. Apart from insisting on lecturing in German - rather than the accustomed Latin - he shocked the local medical fraternity by rejecting the classical theories of medicine. It is said that to bang home his point he burnt the books of Galen and Avicenna in public! Such was the hostility aroused against him, that he had to flee for his life and resume his wanderings. In 1536, however, he made a remarkable come-back with the publication of his one major work, The Great Surgery Book. This brought him renewed fame and notoriety as well as a great deal of wealth. He joined the service of Duke Ernst of Bavaria in 1541 but, as one might expect from such a controversial figure, he died that year in mysterious circumstances while staying at the White Horse Inn in Salzburg.

xxxxxIncidentally, in his travels he attended a large number of universities, including Vienna, Leipzig, Heidelberg and Cologne. He was not impressed with any of them! He later expressed amazement that "so many high colleges managed to produce so many high asses"! And to emphasise his disgust with the medical malpractices of his day, still dating from ancient times, he took on the name "Paracelsus", meaning above or superior to Celsus, the 1st century Roman physician. ......

xxxxx...... His real name - wait for it - was Theophrastus Philipus Aureolus Bombastus von Hohenheim. Given his tendency to self-importance, it is hardly surprising that the word "bombastic" derives from his name, or, rather, part of it! 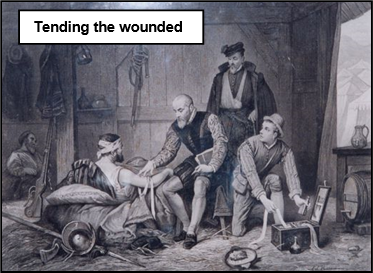 xxxxxAnother physician during this reign who made a vital contribution to surgery was the Frenchman Ambroise Paré (c1509-1590). A military surgeon like Paracelsus, but with much greater experience, he introduced more effective ways of dealing with wounds and amputations, described in his

major work of 1545, Method of Treating Wounds Inflicted by Arquebuses and Other Guns. He advocated the application of lotions and balms rather than treating gunshot wounds with boiling oil, and he reintroduced the use of the ligature or tourniquet to stop serious bleeding, instead of sealing off blood vessels with heat (known as cauterisation). This book became a standard work for battlefield surgery, and its use greatly reduced the death rate amongst the wounded. He is regarded by some as the father of modern surgery.

xxxxxParé was trained in Paris and, during his long career, served as surgeon to four French monarchs. Apart from his contribution to practical surgery, he wrote a number of treatises on anatomy, put forward improved methods in both dentistry and childbirth, and did pioneer work in the making of eyes and artificial limbs.

xxxxxIncidentally, like many physicians of this period, Paré spent some time working as a barber at the beginning of his medical career. This connection between a barber and a doctor came about in the 12th century when monks, forbade by papal decree to shed blood, passed the task of bloodletting and minor surgery over to the local barber, doubtless because of his skill in using sharp instruments. In England, for example, the barbers of London were formed into a trade guild in 1462, and actually amalgamated with that of the surgeons in a charter granted by Henry VIII in 1540. Members were given the right to be addressed as "Master" and that is why, even to this day, surgeons in hospitals use the title "Mr" instead of "Dr". …….. 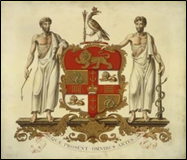 xxxxx…… The two guilds were separated in 1745, but for many years before that date the two professions were distinguished by a slight difference in name. The barber-surgeons were called "doctors of the short robe", and university-trained surgeons and doctors were known as "doctors of the long robe". From 1745 the Company of Surgeons had its premises close to the Old Bailey and Newgate Prison, but then moved to Lincoln’s Inn Fields in 1797. Two years later the government purchased the museum belonging to the distinguished Scottish surgeon John Hunter, and this formed part of the Royal College of Surgeons when it was established in 1800.

xxxxxAnother physician who made a vital contribution to surgery during this reign was the Frenchman Ambroise Paré (c1509-90). A military surgeon, in his major work of 1545, Method of Treating Wounds, he advocated the use of lotions and balms, and advocated the tourniquet to stop serious bleeding. He put forward improved methods in dentistry and childbirth, and achieved pioneer work in the making of artificial limbs. He served four monarchs, and is regarded by some as the father of modern surgery.

Paracelsus: detail, copy of lost portrait, presumed to be of Paracelsus, by the Flemish painter Quentin Massys (1466-1529) – The Louvre, Paris. Blood Letting: medieval illustrated manuscript from the book Omne Bonum, an encyclopaedia of universal knowledge, composed and written by James le Palmer (c1327-c1375), an English clerk of the Exchequer, over the period 1360 to 1375 – The British Library, London. Wounded: engraving by the Belgian illustrator Edouard Jean Conrad Hamman (1819-1888) – private collection.