xxxxxThe Italian writer Baldassare Castiglione (1478-1529) publishes his The Courtier in 1528, based on his life as a diplomat. It sets out the code of conduct required of a gentleman of the Renaissance and, as such, became a primary source of court etiquette. In addition, this work, together with his large collection of letters, provides a first-hand account of Italian society in the 16th century, at the height of the Renaissance. 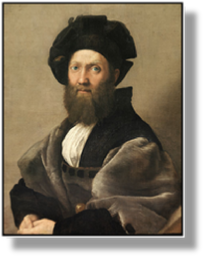 Baldassare Castiglione (1478-1529) was born near Mantua and served with distinction in the diplomatic service. He held a number of senior posts in the courts of Italy and Spain and went on official missions to both Henry VII of England and Louis XII of France. It was upon his own experience of life within these courts that he based his best known work, The Courtier. Published in the form of a dialogue in 1528, it sets out in some detail the code of conduct befitting a gentleman of the Renaissance who moves in royal circles. As such it became a primary source of court etiquette, influencing not only the likes of Castiglione, the diplomat, but also the higher nobility themselves. It was made clear that the courtier, apart from possessing the social graces, had to have a variety of accomplishments, including skill at arms, the ability to write in both rhyme an

d prose, and a perfect command of his mother tongue.

xxxxxBut the value of The Courtier goes beyond the good manners and social requirements of high society. Castiglione came into close contact with the most eminent people of his time. Thus his treatise on the perfect courtier, together with his large collection of letters, provides a first-hand account of sixteenth century society in Italy at the height of the Renaissance. Within a few years of its publication in 1528 it had been translated into Latin and all the major European languages.

xxxxxIn recognition of his services he was made a Count in 1511, and in 1525 he was sent to Spain as apostolic nuncio to the court of Charles V in order to settle a dispute between the pope and the Spanish king. He spent the remainder of his life in this country and died in Toledo. His portrait above is by the Italian artist Raphael, painted around 1514.

xxxxxIt was while Castiglione was writing The Courtier that his compatriot, the poet Ludovico Ariosto (1473-1533), produced his romantic epic Orlando Furioso, based on the exploits of the French medieval hero in the Chanson de Roland. Our hero is driven mad (furioso) by unrequited love, but nonetheless goes on to defeat his rival, the leader of the Saracens. The tale is full of magic, chivalry and courtly love.

he Courtier over the years 1513 to 1518, and it was during this period (1516) that his compatriot, the poet Ludovico Ariosto (1474-1533), produced his major work, the romantic epic Orlando Furioso. A sequel to an earlier uncompleted romance by the Italian poet Boiardo called Orlando Innamorato (Orlando in Love), it is likewise based on the exploits of the French medieval hero in the Chanson de Roland (Orlando in Italian), but with love being the prominent theme.

xxxxxIn Orlando Furioso our hero is

driven mad (hence the “furioso”) by his unrequited love for the lovely Angelico, but he overcomes his emotions and goes on to defeat his rival, the leader of the Saracens. This Renaissance romance, a narrative poem full of magic, chivalry and courtly love, is not to everyone’s liking, but it became widely popular at the time, and was a notable influence on later writers, particularly in England following the translation of the work by Sir John Harrington in 1591.

xxxxxLike Castiglione, Ariosto also served as a diplomat and went on numerous missions, many on behalf of Cardinal Ippolito Este, son of Duke Ercole I, but his heart was in writing, not the diplomatic service, and by 1525 he had saved enough money to retire to Ferrara along with his mistress. Here, he became the director of the town’s new theatre. Apart from Orlando Furioso, a poem which he continued to refine up to the year of his death, he also wrote five comedies and seven satires, but these are not works by which he is well remembered.