xxxxxThe Italian artist Titian was one of the most outstanding and influential painters of the High Renaissance and the greatest of the Venetian school. He gained particular fame for his vast number of religious and mythological works, but he was also a talented portrait painter, and served in the courts of both the Holy Roman Emperor, Charles V, and his son Philip II of Spain. As a result, his services were in constant demand, be it for portraiture, biblical themes or “poetical compositions”, as he called his mythological scenes. 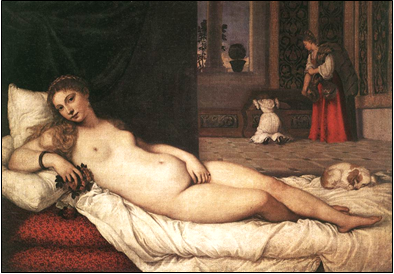 for the Emperor and Pope Clement VII; in Rome for Pope Paul III (where he is likely to have met Michelangelo); and in Augsburg for Philip II, his principal patron, but he produced most of his work in Venice, the city just south of his birthplace, Pieve di Cadore in the Venetian Alps. As a young man he worked alongside Giorgione in the workshop of Giovanni Bellini, and it is likely that when Giorgione died in 1510, he completed some of his work, including his Sleeping Venus, where the reclining nude figure, itself a study in beauty, is clearly used as a model for his delightful and refined Venus of Urbino, (illustrated) produced in 1538. Such sensuous female nudes, the influence of his master Bellini, are to be found in many of his mythological works and are perhaps seen at their best in paintings of a later period.

xxxxxIt was from Giorgione, however, that Titian adopted his idyllic style. And it was from him that he learnt much about the enhancement of colour and brush technique, skills that he developed further over his long career. The incredible depth and richness of his colours were achieved by the application of a number of glazes of transparent colour over a solid foundation, and this sumptuous colouring, together with harmony of composition and the atmospheric use of light, produced work of rare and, in some respects, unique talent. To the traditional High Renaissance style current in Rome and Florence, Titian added the hallmarks of Venetian art: vibrant colour, an interest in texture, and freer brushwork. 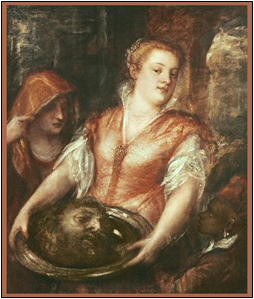 with a religious theme, the beguiling Salome (illustrated) and frescoes depicting The Three Miracles of St. Anthony of Padua, and those based on mythology, like Flora, Sacred and Profane Love, and the Three Ages of Man. Such were their quality and appeal that by 1518 he was fast gaining an international reputation. One of his great religious works at this time was his mighty The Assumption of the Virgin for the high altar in the Church of Santa Maria dei Frari in Venice. It was conceived on a monumental scale. Bathed in a golden light and virtually pulsating with movement and vibrant colours, it caused a sensation when it was unveiled in 1518. In his Pesaro Madonna, completed in 1526, Titian takes the unusual step of placing the Virgin to one side of the canvas and providing a background of towering columns, a device which came to be associated with the Baroque style. Other religious themes produced in his earlier years were the tragic Entombment, Madonna and Child with the Saints John the Baptist and Catherine of Alexandria (in the National Gallery, London), and Christ Before Pilate completed in 1543.

xxxxxAmong his “poetic compositions” - all based on legend or myth and known for the beauty of their female nudes - are three of his most outstanding works, Bacchanal of the Andrians and Worship of Venus, both completed about 1519, and his Bacchus and Ariadne of 1523, now in the National Gallery, London. Admirably capturing the pagan spirit of carefree abandon and full of movement and colour against a lush background, these works must take their place amongst the greatest paintings of the Renaissance.

xxxxxMany works testify to his skill as a portrait 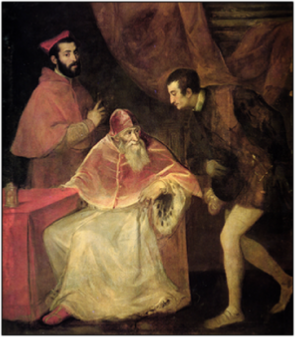 painter. He portrayed a number of leading Italian aristocrats, some in gleaming armour to enhance their status, and the Emperor Charles V sat for his portrait on at least three occasions. And from this period are two of his finest family pieces, the Vendramin Family (in the National Gallery, London) and Pope Paul III and his Grandsons (illustrated). The first, brilliantly executed, shows the two elders of the family kneeling before an altar together with their seven sons, all in natural pose; whilst the second, by its composition alone, cleverly captures the feud simmering below the surface within the Farnese family. Also worthy of note are his early works, Gentleman in Blue (also known as Ariosto and in the National Gallery, London), the so-called Young Englishman, cultivated and suave, and a portrait of his close friend Pietro Aretino, the Italian writer and poet.

xxxxxTitian was painting for nearly two decades after the reign of Henry VIII and, as we shall see (1554 M1), some of his finest work belongs to these later years.

xxxxxTitian was one of the outstanding painters of the High Renaissance and the greatest of the Venetian school. He is famous for his religious and mythological works, but he was also a talented portrait artist. He worked for the popes Clement VII and Paul III, and served in the courts of Charles V and his son Philip II, his principal patron. As a young man he worked alongside Giorgione in the workshop of Giovanni Bellini. His paintings are noted for their rich, vibrant colours, interest in texture, freer brushwork, and harmony of composition. His greatest religious works include his mighty The Assumption of the Virgin for the church of Santa Maria dei Frari in Venice, and his Christ Before Pilate, completed in 1543. Outstanding among his mythological studies - noted for their sensuous nudes - are Venus of Urbino, Worship of Venus and Bacchus and Ariadne of 1523. In this early period, his portraiture included the Vendramin Family and his Young Englishman. But some of his finest work was yet to come, as we shall see in 1554 (M1).

xxxxxAs one might imagine, Titian's brilliant use of colour and his pioneer work in composition was to greatly influence future artists, even to the point of virtual imitation at times, but his work also had an impact on contemporary painters such as the talented Paduan Correggio (c1494-1534). His style followed the classical grandeur associated with the High Renaissance, and it is clear that his work was influenced not only by Titian, but also by Leonardo da Vinci and - after a visit to Rome - the great Vatican frescoes of Raphael and Michelangelo. Like Titian too, his work anticipated the Baroque style with its muted forms, its emphasis on movement and the dramatic, and its subtle variation between light and shade (known as chiaroscuro).

xxxxxCorreggio, the assumed name of Antonio Allegri, studied at Mantua for a short time under the Paduan Andrea Mantegna, and spent most of his life between Parma and his native town of Correggio (from whence his name). Whilst at Parma he gained an enviable reputation for his achievement in the skill of perspective. Having been greatly impressed by Mantegna’s “ceiling illusion” in the bridal chamber of the ducal palace at Mantua - a masterpiece of linear perspective - he also attempted the technique of “foreshortening”. In 1523 he produced his own three-dimensional effect in his Assumption of Christ in the cupola of the church of San Giovanni Evangelista, and then followed this up with his remarkable Assumption of the Virgin (detail illustrated below), completed in the dome of the cathedral in 1530. In these frescoes, and particularly the second, he not only captures the illusion of space and depth, but clearly foreshadows church decoration in the Baroque style. The vast roof area becomes the vault of heaven, thronged with figures which seem detached from cloud and sky.

xxxxxThe Paduan artist Correggio (c1494-1534) was much influenced by Titian's style and by the works of Leonardo da Vinci, Raphael and Michelangelo. As a painter, he gained a reputation for his skill at achieving perspective, to be seen in his remarkable Assumption of the Virgin, a vast fresco notable for its illusion of space and depth. He produced some powerful altarpieces, as in his night scene Adoration of the Shepherds, and his devotional works included the Nativity, where the scene is lit by a seemingly divine light. Among his many mythological themes were Leda and the Swan and Mercury instructing Cupid.

xxxxxIllustrated here are Ecce Homo, Deposition from the Cross, and details from Assumption of the Virgin and Holy Night.

xxxxxA probable pupil of Correggio was the Italian painter and etcher Francesco Parmigianino (1503-1540). He painted mainly religious subjects and portraits. He tended to elongate his figures, as can be seen in his masterpiece The Madonna of the Long Neck. In this he was one of the first exponents of Mannerism, a reaction against the order and perfection in current art. Among his principal works were Cupid Sharpening his Bow and The Mystic Marriage of Saint Catherine. He also produced some fine portraits. The Italian navigators Christopher Columbus and Amerigo Vespucci were among his sitters.

xxxxxAmong Correggio’s pupils was probably the painter and etcher Francesco Parmigianino. He was born in Parma in 1503 (from whence he took his name) and, like his master, spent his early years in his hometown where he worked for a time in the cathedral, decorating the southern transept in 1522. The following year he went to Rome in the hope of working for the pope, Clement VII and, so the story goes, was busy painting his Vision of St. Jerome (now in the National Gallery, 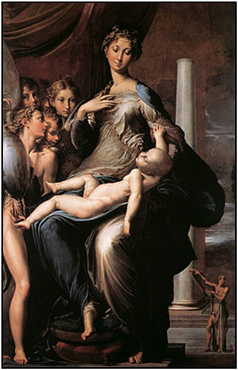 London), when imperial troops burst into his studio during their sacking of the city in 1527. He managed to escape, and spent some time in Bologna before returning to Parma in 1531. Here he was imprisoned for a while for breach of contract and, on his release, fled to Casal Maggiore where he died in 1540.

xxxxxHe painted mainly religious subjects and portraits, and his style marks him out as one of the creators and leading exponents of Mannerism. He tended to elongate his figures, exaggerating their height and slenderness (as El Greco and others were later to do), a well-known example being his masterpiece, The Madonna of the Long Neck, painted around 1535 and now in the Uffizi in Florence (illustrated). He was among the first Italian artists to make original etchings and these proved particularly valuable in spreading Mannerism, a style born of a reaction against the craze for order and perfection in current art. (It derives from the word maniera meaning “stylishness”). 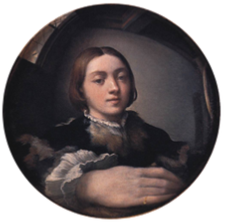 sensuous style, but he was also much influenced by the work of the Roman painter Raphael. Among his principal works are Cupid Sharpening his Bow, and two paintings produced while at Bologna, Madonna and Child with St. Margaret and Other Saints and his own version of The Mystic Marriage of Saint Catherine, noted for its tight rhythmic design. He also earned a reputation as a fine portrait painter. Both the Italian navigators, Christopher Columbus and Amerigo Vespucci, sat for him, and in 1524 he painted an intriguing Self-Portrait in a Convex Mirror, here illustrated.

xxxxxAs a painter in oil, his richness in colour and texture can be seen at its best in such altarpieces as his night scene Adoration of the Shepherds, and his Madonna of St. Jerome. His charming devotional works include The Madonna of the Basket, The Mystic Marriage of St. Catherine, and his Nativity, a work which appears to be illuminated by a divine light (illustrated left above). Amongst his mythological themes are Jupiter and lo, Danae, Leda and the Swan (illustrated right above), The Rape of Ganymede, and Mercury instructing Cupid, all enhanced by their softness of line, and all notable for their sensuous nude figures, some of them bordering on the erotic.