xxxxxAs we have seen, by the Union of Kalmar in 1397 (R2), Denmark, Norway and Sweden were united. But it was a troubled union. Eventually in 1518 the Danes attacked the Swedes, defeated them at Lake Asunden and placed their king, Christian II, on the Swedish throne. However, Gustav Vasa, a young Swede of noble birth, escaped from the battle, formed an army of peasants and went on the attack, driving the Danes out of Sweden in a three-year campaign. By the Treaty of Malmo in 1524 the Danes accepted Swedish independence. Elected king, Gustav Vasa built a navy, raised a standing army - the first of its kind -, restored law and order, and, by defeating the Hanseatic League in 1536, made the country solvent. The house of Vasa survived until 1720 and, as we shall see (1630 C1), was to include one of the greatest of his line, his grandson Gustav Adolphus.

xxxxxAs we have seen, it was by the 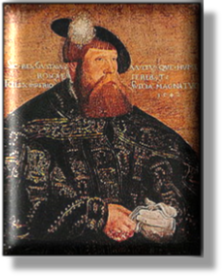 Union of Kalmar in 1397 (R2), that Denmark, Norway and Sweden were united under one king, Eric of Pomerania. It was a union that was to survive in name for well over one hundred years, but it was not without its internal disagreements and conflicts, particularly between Denmark and Sweden.

xxxxxIt was one such conflict, beginning in 1518, that was finally to bring an end to the union. It was in that year that the Danish king, Christian II, invaded Sweden to regain the throne that his country had lost at the beginning of the century. In January 1520 the Danes defeated the Swedes at Lake Asunden and their success seemed assured. In the Swedish resistance, however, was a young soldier of noble birth named Gustav Vasa, aged 24. He had been taken hostage in the fighting, but had managed to escape to fight another day. On learning that the Danes, having occupied Stockholm and crowned Christian II king, had carried out a massacre of Swedish nobles - including his own father and two of his uncles - he formed an army of peasants and went on the attack. In a three-year campaign, during which he received support from the rich trading centre of Lubeck, he drove the Danes out of Sweden.

xxxxxIn 1524 the Treaty of Malmo was signed by 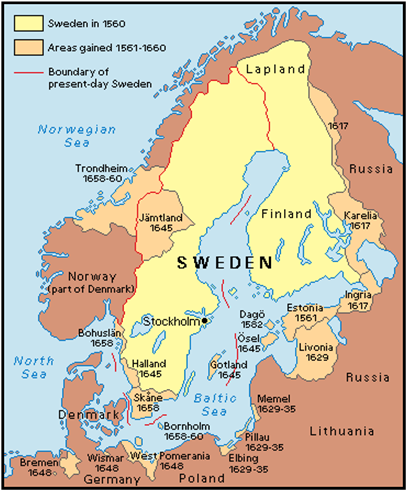 Denmark, confirming Sweden’s independence and the ending of the Union. In the meantime, in recognition of his achievement, the National Assembly (the Riksdag), had elected Gustav Vasa king, thus creating the Swedish royal house of Vasa which ruled until 1720. Once in power, he set about restoring order and strengthening his hold on the country, a task which took him some years to achieve. He was not a religious man, but by embracing the Protestant cause he reduced at a stroke the authority of the Roman Catholic Church - which had openly supported Christian II of Denmark. In 1529 Lutheranism was made the state religion and, by this time, all property belonging to the Church had been confiscated and its leading clerics brought under his jurisdiction. This increased his wealth considerably, and also enabled him to bestow church land as a means of winning over the support of his more powerful nobles. And his finances were further assisted in 1536 when he played a part in defeating the Hanseatic League. As a result, the sizeable debt owed to Lubeck was wiped out, as were the city’s trading privileges.

but competent administrator, putting the country’s finances in good order, and encouraging the growth of trade and agriculture. He also enhanced royal authority by the establishment of a loyal standing army, the first of its kind in modern times, and by the creation of a strong navy. By such means he laid a sound foundation for the rule of his three sons, and especially, as we shall see (1630 C1), for that of his grandson Gustav Adolphus, considered the greatest of the Vasa line of kings.