xxxxxThe Barbary pirates, based along the North African coast, had been a menace to shipping from Roman times, but the real threat came early in the 16 century when the Moors asked for help from Selim, the Sultan of Turkey. Two Turkish corsairs, the Barbarossa brothers Arouj and Khair-ed-Din, came to their aid. In 1529 Algiers was captured and five years later the valuable territory of Tunisia was taken. In 1535 Charles V, the Holy Roman Emperor, captured the port of Tunis, but three years later Khair-ed-Din defeated a combined fleet at the Battle of Preveza, organized by Pope Paul III, and gained command of the eastern Mediterranean, not lost until the Battle of Lepanto in 1571 (L1). Then, as we shall see (1638 C1), by the reign of Sultan Murad IV (1623-40) the pirates had exchanged their galleys for sailing boats and had become an even more formidable enemy.

xxxxxThe Barbary pirates, based along the 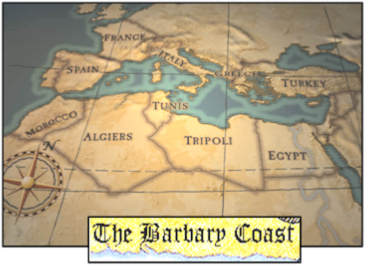 North African coast from Libya (Tripoli) to Morocco, proved a serious danger to Mediterranean shipping as early as Roman times, and became particularly active during the 14th century, centred on the port of Bougie in north-eastern Algeria. The real menace, however, came at the end of the 15th century when the Spanish conquered Granada in 1492, the last stronghold of the Moors on the Spanish mainland. Driven back to North Africa they settled along the coast and added their weight to the piratical attacks upon the Spanish mainland and the commercial shipping of European nations.

xxxxxEarly in the new century, the Spaniards 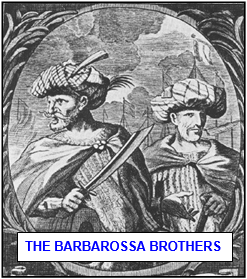 retaliated by conquering the coastal towns of Oran, Algiers and Tunis, and then fortifying the island of Penon in the Bay of Algiers in 1514. Four years later, however, the Moors appealed to Selim, the sultan of Turkey, and the tables were turned. Hexcalled upon the services of two Turkish corsairs, Arouj and his brother Khair-ed-Din (illustrated), both known to the Christians as Barbarossa because of their red beards. They seized the island of Penon, and then Khair-ed-Din (sometimes known as Hayreddin) went on to capture Algiers in 1529, claiming the port on behalf of the Ottoman sultan, by then Suleyman I. Then five years later, having been appointed admiral of the Ottoman Empire, he captured Tunisia, and within a short time Tunis had become the centre of a prosperous pirate “kingdom” which stretched along the coasts of Morocco, Algeria and Tunisia. From here, fleets of large galleys, powered by slaves, would spread out across the eastern Mediterranean, preying upon rich merchant shipping. There were plenty of ships to pick from, and when one was boarded, its cargo would be taken, its crew forced into slavery, and the profit from the booty would be shared out amongst the pirates - with ten percent or so going to the onshore rulers, the beylerbeys.

xxxxxIt was to put an end to this constant menace 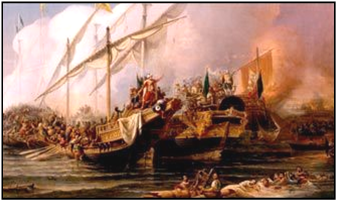 against his shipping in the Mediterranean that in 1535 the Holy Roman Emperor, Charles V, took a break from fighting the French in Italy and launched a naval attack upon Tunis. His forces managed to capture the port, together with Goletta, but his attempt to overthrow Khair-ed-Din fared no better than his earlier attacks upon the Ottoman Turks in Eastern Europe. He called a halt to his crusade within the year and left for Naples. Then three years later Khair-ed-Din, going on the offensive, took on a combined fleet, organized by Pope Paul III, and soundly defeated it at the Battle of Preveza (illustrated), off the west coast of Greece. This victory secured the eastern Mediterranean for the Turks until their defeat at the Battle of Lepanto in 1571 (L1).

xxxxxIn the latter half of the 16th century, 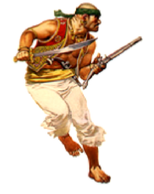 despite further attempts by European powers to put an end to their activities, the corsairs stepped up their ferocious sorties, attacking Mediterranean coastal towns and villages to capture slaves - some of whom were sold for ransom - , and receiving tribute money from nations prepared to pay to keep their shipping safe. Then, as we shall see (1638 C1), by the reign of the Ottoman Sultan Murad IV (1623-40) these “skimmers of the sea” had exchanged their galleys for sailing boats. This extended the range of their operations and made them an even more formidable enemy on the high seas.

xxxxxIncidentally, the name “Barbary” is derived from the “Berbers”, the earliest known inhabitants

of the North African coast. ……

xxxxx……xxIt must be noted that whilst the Barbary Pirates were ferocious fighters and cruel masters, their Christian enemies had a somewhat similar reputation.