xxxxxThe French navigator Jacques Cartier made three voyages to North America in search of a north-west passage to the Orient. In 1534 he explored the entire Gulf of St.Lawrence and returned the following year to sail up the St.Lawrence, the first European to do so. He stopped at the site of modern Quebec and then sailed to a village which he called Mont Réal (Montreal) before returning to France. On his third voyage, begun in 1541, he wintered in the area of Quebec, but fighting broke out with the local Indians and he was forced to abandon the expedition. He returned home with “gold” and “diamonds”, but they proved worthless. These three voyages established a French claim to this vast region, but, as we shall see, it was not until 1608 that the French navigator Samuel de Champlain turned that claim into a reality. 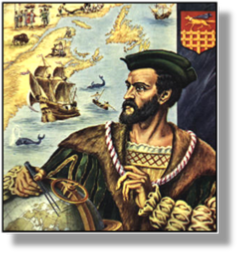 Cartier was born in St. Malo in Brittany and, supported by his monarch, Francis I, made three voyages to North America, all in search of a north-west passage to the Orient.  In his first expedition of 1534 he sighted the coast of Newfoundland and explored the entire Gulf of St. Lawrence, claiming the adjoining land as New France. Convinced that he had discovered a sea route to the west, he returned the following year and, with the aid of two Indian guides, sailed up the St. Lawrence River, the first European to navigate this huge waterway. He reached the native village of Stadacona, the site of modern Quebec, and then continued on to the village of Hochelaga. It was here that he climbed the height behind the village and called it Mont Réal, the term from which the city of Montreal derives its name. And it was here at Mont Réal that Cartier decided to turn back because of the bitterly cold weather and the formidable Lachine Rapids. He wintered at Stadacona, where he lost a number of his men from scurvy, and then returned to St. Malo, reaching his home port in July 1536. 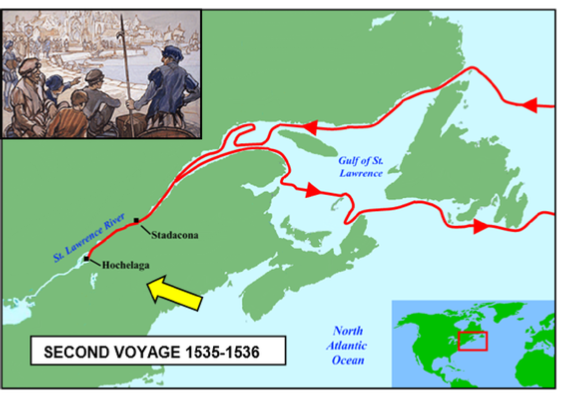 begun in 1541, Cartier again reached Hochelaga (Montreal) (arrowed on map), and again wintered at Stadacona. He established a settlement there after discovering what he thought to be diamonds and deposits of gold in abundance, but in 1542 trouble broke out between his crew and the local Indians. In the fight which ensued over thirty of his men were killed and he was obliged to call off the expedition. On his return he wrote an account of his three voyages and these, translated later into English and Italian, did much to stimulate interest in exploration. More to the point, it was through these voyages that France laid claim to Canada, though, as we shall see, it was not until 1608 that the French navigator Samuel de Champlain, the "father of New France”, turned the claim into a reality.

xxxxxIncidentally, the gold and diamonds discovered during the third expedition, having been sent or carried home, were found to be worthless. The “gold” was iron pyrites and the “diamonds” were quartz. “False as a Canadian diamond” became a common French expression!