youngest daughter of Ferdinand V and Isabella I, king and queen of Aragon and Castile, was married to Henry’s older brother Arthur in 1501 as a means of making a firm alliance with the powerful state of Spain. Arthur died the following year, however, and Henry VII then arranged for his second son, Henry, then aged 12, to marry Catherine and keep the alliance in place. A papal dispensation was obtained for this marriage, and when Henry came to the throne in April 1509 he married Catherine of Aragon two months later. The marriage appears to have been quite a happy one. She bore Henry six children but only one of them, a girl named Mary (the future Queen Mary I), survived.

xxxxxBecause of her failure to bear a son, in 1527 Henry sought a divorce on the grounds that his marriage was not valid, he having married his brother’s widow. This decision triggered off the English Reformation. The pope, Clement VII, finding it difficult to annul a marriage he had earlier allowed and, more to the point, very much under the thumb of the Emperor Charles V, Catherine’s nephew, dragged his feet for some seven years! Henry then took the matter into his own hands and via his Archbishop Thomas Cranmer, and his first minister, Thomas Cromwell, pronounced his own divorce. In 1534 the pope finally declared against the divorce, and in the same year Henry was made head of an English independent church. The break with Rome was complete. As for Catherine, she would not leave the country and bravely refused to sign away her own rights and those of her daughter Mary, now declared illegitimate and thus no longer heir to the throne. When the king married Catherine Howard in 1540, however, Mary was allowed to return to Court and in 1544, though still regarded as illegitimate, was made successor to Edward VI.

xxxxxHenry’s second wife, Anne Boleyn (c1507-1536), was the attractive and scheming daughter of Sir Thomas Boleyn, later made earl of Wiltshire and Ormonde. A resident at Court and playing hard to get, Henry married her in secret in January 1533, even before the divorce had been finalised. She was crowned Queen in the June and in the September gave birth to a daughter Elizabeth, the heir to the throne (the future Elizabeth I). In the meantime, she stripped Mary of her title (princess), would not allow her to see her parents, and obliged her to act as lady-in-waiting to the young Elizabeth.

xxxxxThree years later, however, Anne fell from grace. She was charged with adultery and incest and imprisoned in the Tower of London. On being found guilty, she, her brother Lord Rochford, and four other men were executed. One of the men, a court musician, was hanged; the others were beheaded. Whether Anne was guilty of these charges cannot be substantiated, no records of the trials having survived, but it is known that Henry was anxious to marry Jane Seymour. She had refused to be his mistress and this doubtless had a bearing on Anne Boleyn’s fate, justified or not. 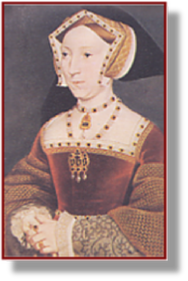 year on the anniversary of Anne’s execution, a bowl containing red roses is delivered to the Tower of London - donor unknown!

xxxxxJane Seymour (c1509-1537) had been a lady in waiting to both Catherine of Aragon and Anne Boleyn and married the King privately less than two weeks after the beheading of her mistress. She died in October of the following year, just 12 days after giving birth to a son, Edward, Henry’s only legitimate male heir and the future Edward VI. Henry was genuinely saddened by her loss, and favoured her family until his death. Her brother, the Earl of Hertford, became regent during the short reign of his nephew Edward VI, taking on the office of Lord Protector with the title of the Duke of Somerset. 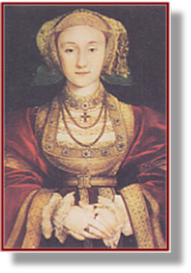 Anne of Cleves (1511-1547) was politically motivated by Thomas Cromwell in 1540. Fearing a Catholic alliance against England, he was anxious to gain the support of the Lutherans in northern Europe and this seemed to be the solution. It wasn’t. The court painter, Holbein, was sent over to paint a portrait of Anne, the member of a prominent Protestant family in Germany, but his portrayal was somewhat flattering. The marriage was agreed, but when Henry saw his bride “in the flesh” he was none too pleased. She was lacking in both beauty and sophistication, and her knowledge of English was limited. The result was a quick divorce and a quick exit for Cromwell, executed a year later on what appears to have been a trumped-up charge of treason by his enemies at Court. 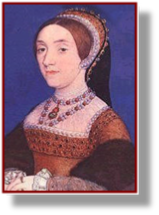 Anne of Cleves on the 9th of July 1540 and married Catherine Howard (c1520-1542) on the 28th! She was the niece of the Duke of Norfolk, and had had a long liaison with the king thanks to the good offices of Stephen Gardiner, the bishop of Winchester! It was another short marriage. In November the following year she was accused of adultery, and of having been “unchaste” before her marriage. Witnesses were produced and she admitted to premarital relations. Two of her “lovers” were executed the following month and she was beheaded at the Tower of London in February 1542. 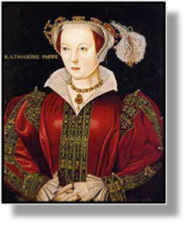 Catherine Parr (1512-1548), was the daughter of Sir Thomas Parr of Kendall, an official of the royal household. Twice a widow, the ageing king married her in 1543 and she was as much a nursemaid to him as a wife. A competent, deeply religious woman, she helped educate all three of Henry’s children, and, as a Protestant sympathiser, played a part in protecting those who opposed the Catholic church. She acted as regent during Henry’s campaigns in France. After the king’s death she married Baron Seymour of Sudeley, one of Jane Seymour’s brothers, but died in childbirth in 1548.