xxxxxThe Spanish adventurer Francisco Pizarro (c1475-1541) learnt of the Inca Empire while exploring the north-west coast of South America. In 1530 he returned with just 180 men and, reaching the Inca Empire two years later, captured and killed its leader Atahualpa. Without central direction the empire collapsed. By 1533 the small party had captured the capital Cuzco and claimed “Peru” for Spain. Thus came to an end the Inca Empire which had been founded around 1100 (H1) and, over the years, had stretched its control over a vast area along the Pacific coast. There was an attempt to re-establish its power, but, as we shall see, this petered out with the death of Tupac Amaru in 1572 (L1). 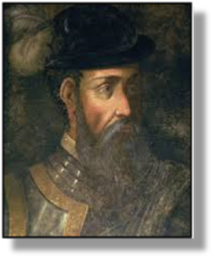 Francisco Pizarro (c1475-1541) was of humble birth and uneducated, but, as a relative of Hernan Cortes, he sailed to Hispaniola as a young man in 1502 and was with the explorer Balboa when he discovered the Pacific Ocean in 1513. With two partners, he then began exploring the north-west coast of South America and after much hardship eventually reached the Santa River in Peru, where he learnt of the Inca Empire. It was at this time that the expedition named the country Peru, probably a corruption of a local river called Viru. On his return in 1524 he was made a knight of Santiago and governor and captain general of the new territories, titles which did not necessarily endear him to his “partners”! 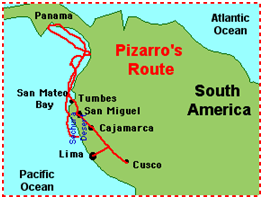 orses but with a quantity of guns, he set off from Panama and, having reached the coast of the Gulf of Guayaquil, moved inland into the empire of the Incas. He met up with their leader, Atahualpa (1497-1533), at Cajamarca in November 1532, and set up an ambush in the city square. After capturing him and receiving a vast haul of silver and gold as a ransom (some 24 tons in all!), Pizarro then accused him of murder and promptly had him throttled in 1533. He then carried out a series of attacks upon the Incas - already weakened by civil war and now without their leader - and thousands were killed or taken as slaves. Within a year the empire’s capital, Cuzco, had been captured, and Peru was claimed as Spanish territory - and was to remain so for nearly three centuries. Two years later in 1535 he founded the Peruvian city of Lima.

xxxxxThus ended the vast and amazing Inca Empire, which had begun with the founding of the city of Cuzco around 1100 (H1) and, at the height of its power, had stretched over much of today’s Peru, Chile and Bolivia. As we shall see, there was some late resistance to the Spanish invaders, but this petered out with the death of Tupac Amaru, the last of the male royal line, in 1572 (L1).

xxxxxNow, as the Marquis of Atavillas and a member of the Spanish aristocracy, Pizarro set about developing the land he had conquered, but in 1541 his past caught up with him, and he was assassinated by followers of one of his partners whom his brother, Hernando, had killed three years earlier. His half-brother Gonzalo Pizarro then appointed himself governor of Peru, but he was overthrown in 1544 and executed. It was not, in fact, until 1569 that peace and order was fully achieved between the rulers of this new Spanish territory.

xxxxxIncidentally, for many years, from 1891 to 1977 in fact, what was thought to be the mummified body of Pizarro was displayed in Lima. Then in 1977 a skull and some human bones were discovered in a crypt in Lima cathedral and in 1984 these were verified as the remains of Pizarro. ……

xxxxx…… Accompanying Pizarro on his expedition to Peru was the Spanish explorer Hernando De Soto (1496-1542). After the overthrow of the Inca Empire in 1535, he was made governor of Cuba and commissioned by the Spanish crown to explore Florida. In 1538 he landed in Florida with 700 men and having explored part of the peninsula, journeyed through Georgia, the Carolinas and Tennessee. He found no gold and lost half his men when he was attacked by Indians in Alabama. He reached the Mississippi in May 1541, and it was there that he died of a fever the following year.

xxxxxThe Spaniard Francisco de Orellana (c1511-46) took part in the conquest of Peru and then joined an expedition into the interior of South America. On crossing the Andes he and 50 others followed the Napo River and became the first Europeans to discover the River Amazon near its source and to navigate almost its entire length, reaching the Atlantic in August 1541 after a journey lasting eight months. 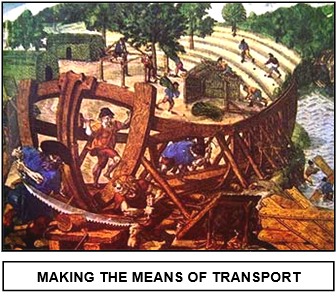 explorer who earned a place in the history books at this time was Francisco de Orellana (c1511-1546). He took part in Pizarro’s conquest of Peru, and later joined an expedition into the interior of South America, led by Pizarro’s half-brother Gonzalo. On crossing the Andes, he and fifty others left the main party and, following the Napo River, became the first Europeans to discover the River Amazon near its source and to navigate almost its entire length. His small party drifted down the river for nearly eight months and reached the Atlantic in August 1541. It might well be that they hoped that the river would take them to El Dorado, the legendary land of gold and precious stones. If that is the case, they were deeply disappointed.

xxxxxOn their return, the members of the party 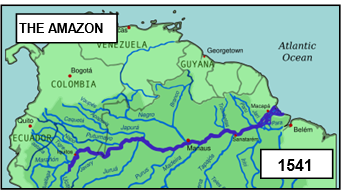 provided varying tales of their encounters with a number of fierce female warriors. They were likened to the Amazons of Greek mythology, and this gave the river its name. The circumstances of his death are not clear. One account states that he died while attempting to conquer the region now known as Venezuela; another that he drowned in a shipwreck at the mouth of the river he had so recently discovered and explored.

xxxxxEarlier and further south, the Spanish soldier Pedro de Mendoza (1487-1537) had reached the Rio de la Plata region in 1535 and established the settlement of Santa Maria de Buen Aire (Buenos Aires). But lacking food and attacked by the local Indians, they finally moved inland to Asuncion. It was not, in fact, until 1580 that the Spaniards returned to reclaim their coastal settlement.

xxxxxEarlier, the Spaniards had also 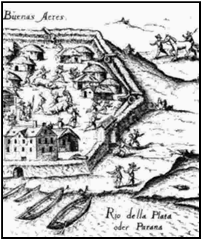 explored and settled further south. In 1535, the soldier Pedro de Mendoza (1487-1537), sent by his Emperor, Charles V to explore the interior of South America, reached the Rio de la Plata region with some 2,000 men and the following year established the settlement called Santa Maria de Buen Aire (Buenos Aires). Because of the lack of food and attacks from local Indians, however, the settlers were forced to abandon the area and move inland, finally settling at Asuncion. In the meantime Mendoza, by now seriously ill, left for Spain in 1537, but died during the journey and was buried at sea. It was not until 1580 that the Spanish returned to Buenos Aires to retake the settlement he had founded over forty years earlier.