xxxxxThe English cleric and church reformer Thomas Cranmer became Archbishop of Canterbury in 1532 and by May 1533 had granted the king his divorce from Catherine of Aragon. In the Reformation that followed he was a prime mover, along with Thomas Cromwell, in establishing a national church which was totally independent from papal jurisdiction. And he continued to play a part in the king's matrimonial affairs, invalidating his marriages to both Anne Boleyn and Anne of Cleves. With the king's death in 1547 he continued his protestant reforms under Edward VI and, as we shall see, was to pay dearly for them in 1556 during the reign of the Catholic Queen Mary I. 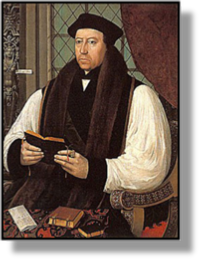 xxxxxThomas Cranmer was born at Aslacton in Nottinghamshire and, after enduring a strict education at the hands of a “cruel schoolmaster”, he went up to Cambridge. On completion of his studies he taught theology and settled down to a married life, but his wife died in childbirth and it was then that he entered the Church. By 1527, as a member of a small group nicknamed “Little Germany” (which included William Tyndale) - he had come down strongly in favour of reform, calling for an end to papal supremacy and supporting the right of the king to divorce his first wife, Catherine of Aragon - fast becoming a burning issue at Court. 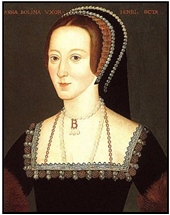 in Waltham, Essex, and it was there, by chance, that he met two of the king’s councillors, Stephen Gardiner and Edward Fox. They were impressed with the strength of Cranmer’s arguments in favour of the royal divorce, and the king, being told about this forthright cleric, summoned him to an interview. Thus it was that Cranmer found himself in the service of the crown, charged with the task of making out a case for the royal divorce. Having written a treatise to support the king’s cause, he joined a delegation to Rome in 1530. He was politely received by the pope, but no progress was made. Henry decided to take matters into his own hands. When the archbishop of Canterbury, William Warham, died in 1532, Cranmer was appointed to this high office the following year and, under the king’s direction, lost no time in settling the matter. In May 1533, in the space of five days, he declared Henry’s marriage to Catherine of Aragon void from the outset, and his marriage to Anne Boleyn (illustrated) perfectly lawful. The outcome was predictable. Henry was at once excommunicated by the pope, Clement VII, and the English Reformation was under way.

xxxxxCranmer, together with Thomas Cromwell, now became one of the prime movers in the establishment of an independent national church. The pope’s name was erased from every prayer book in the land, papal authority was no longer recognised, and many Roman Catholic festivals were abolished. At one time he even endeavoured to bring about a union between the English and Lutheran churches. And in 1539 when Henry, fearing

he had gone too far down the protestant road, re-enacted certain Catholic doctrines via his Six Articles, Cranmer came out openly against them. At the same time he also took the lead in revising the creed and liturgy of the church (still in use today) and in sending to all parishes in the land a copy of the “Great Bible”, an edited version of earlier translations by Tyndale and Coverdale, and so named because of its large pages.

xxxxxIn the meantime, Cranmer continued to play a part in the king’s matrimonial affairs. He invalidated two of his marriages, the one to Anne Boleyn - which he had worked so hard to bring about! - and the one to his fourth wife, Anne of Cleves, the marriage which cost Thomas Cromwell his life! Later, in 1542, he also played a part in the proceedings against Catherine Howard.

xxxxxGiven his service to the crown, it is perhaps little wonder that the king held him in high esteem and often turned to him for advice. Cranmer was not an ambitious or greedy man, and it was probably because of this that the king liked and trusted him. In 1547, when Henry lay dying, he asked Cranmer to be at his bedside and, in his will, he named him as one of the regents for the young king Edward VI. In the short reign that followed, Cranmer continued to carry out the protestant reforms begun in the early days of the English Reformation. As we shall see, in 1556, in the reign of the Roman Catholic Mary I, he was to pay dearly for his actions.