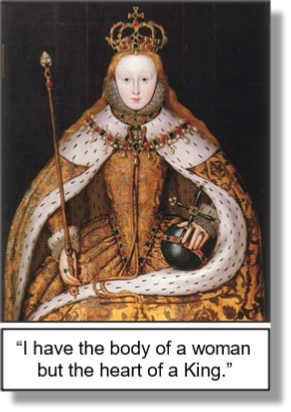 xxxxxThe Elizabethan Age is seen as one of triumph for England. The defeat of the Spanish Armada, the daring exploits of seafarers like Drake, Hawkins and Raleigh, the growing prosperity, and the bursting into flower of English literature via the quills of brilliant writers like Marlowe, Shakespeare and Spenser, provide just cause for national pride. But, in truth, Elizabeth's reign was beset with troubles. The religious divide meant that her throne was constantly under attack by Catholics, and this danger spilled over into foreign affairs. For many years the country lived in constant fear of a Spanish invasion, actively encouraged by the pope, and this fear continued into the 1590s despite the victory of 1588. And her later years were marred by lack of money, disputes with parliament, and the rebellion led by her one-time favourite the Earl of Essex. She concurred in his execution, but she never got over his death.

xxxxxElizabeth was born at Greenwich. She was an intelligent child, and received a good education, notably at the hands of her tutor Robert Ascham. During the reign of her half sister Mary, a staunch Roman Catholic, she was constantly under suspicion of supporting the Protestant cause. On one occasion she was imprisoned in the Tower of London, having thought to be implicated in the Wyatt Rebellion. She came near to execution, but without substantial evidence against her, Mary feared that her death would bring a popular uprising. For the most part, however, she lived in seclusion at Hatfield in Hertfordshire.

xxxxxWhen Elizabeth came to the throne, she was determined to return the country to the Protestant faith. She did this in 1559 by a series of measures within a Religious Settlement. This included the Acts of Supremacy and Uniformity, the Articles of Faith (reduced from 52 to 39), and the introduction of the Elizabethan prayer book. Her reforms, in general, were moderate, but nonetheless, she was caught between a rock and a hard place. If her measures against the Catholics were too stringent, she faced the danger of rebellion and plots against her. Ifxthey were too lenient she attracted the wrath of the extreme Protestants, the Puritans. They were growing in number, strengthened by Calvinist refugees from Flanders, and quite prepared to attack the established Church in their Marprelate Tracts of 1588 and 1599. ThexPolitie of 1593, a reasoned defence of the Church of England by the outstanding theologian of this time, Richard Hooker (1554-1600), was aimed not only at Roman Catholicism, but also at the growing threat of Puritanism.

xxxxxThis delicate balancing act was made the more difficult by the presence of Mary Queen of Scots, grandniece of Henry VIII. As a Roman Catholic, she was seen by Catholics at home and those in exile abroad as the rightful Queen of England. Indeed, the marriage between Elizabeth's parents, Henry VIII and Anne Boleyn, had been declared illegal by Henry VIII himself! And matters became even worse when Mary took refuge in England in 1568 and became a virtual prisoner of the Queen she aimed to replace. A series of plots against the throne followed, the most serious ones being a Catholic uprising in the North in 1569, the Ridolfi Plot of 1571, and the Throgmorton Plot of twelve years later. By the early 1580s Jesuits were being smuggled into England to lead a countrywide rebellion. Two such missionaries, Edmund Campion and Robert Southwell were caught and executed, their martyrdom only serving to fan the flames of Catholic opposition. In 1587 the government - in the person of the Queen's secretary Sir Francis Walsingham - was determined to bring about Mary's downfall. In that year he engineered the Babington Plot and, intercepting letters sent by her to the conspirators, confirmed her complicity. Elizabeth hesitated, but had no real alternative but to execute her cousin and rid the country of this persistent danger. 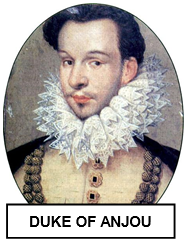 xxxxxFor the Catholics, the death of Mary Queen of Scots in 1587 meant that armed intervention was the only way to bring England back to the Catholic fold. The Spanish armada, under preparation for some years, was prepared for sail. That Elizabeth had managed to keep at peace with her European neighbours for so long is a credit to her subtle diplomacy. She had made peace with France in 1559, and by holding out the prospect of marriage to the rulers of hostile states, she kept them ever hopeful and ever at bay. She did at one time come close to marrying the Duke of Anjou, but she changed her mind overnight, putting country before herself. In any case, she had no desire to share her power. But the peace she secured was really war on her terms. She gave a nod 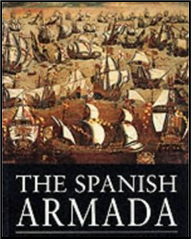 and a wink to sea adventurers who raided Spanish colonies and looted Spanish ships, she assisted the Protestant cause in France, and she did not hesitate to give secret support to the Dutch in their fight against their Spanish overlords. It was not until 1585, in fact, following the assassination of William of Orange, that she came out in the open, sending an army to the Netherlands under the command of the Earl of Leicester to take on the Spaniards.

xxxxxThe defeat of the Spanish Armada in 1588 put an end to external danger on a large scale - though this was not realised at the time - but at home troubles continued to mount. Elizabeth had made peace with the Scots early on by the Treaty of Edinburgh, but there was bitter opposition to Protestantism in Ireland. Having already had difficulty in suppressing revolts in 1562 and 1569, the rebellion of 1594 was not overcome before the English suffered a serious defeat at the hands of the Catholics in 1598. Atrocities on both sides left a legacy of hate and suspicion. And as Elizabeth grew older, the power of parliament grew stronger, anticipating the struggle to come between parliament and the Stuarts. The final blow came with the weak attempt of the Earl of Essex to overthrow the Queen he had served with so little success and with such a high hand. Despite his failings, the nation admired him and Elizabeth clearly adored him. 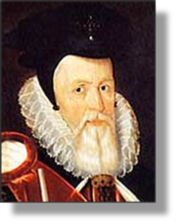 xxxxxDuringxher reign, the Queen clearly had favourites among her courtiers - young men like Leicester, Essex and Sir Walter Raleigh whom she admired for their dash and daring - but she had in her principal secretary Sir Francis Walsingham (1573-1590) and in her chief advisor, William Cecil, Lord Burleigh (1558-1598) (here illustrated), two loyal and exceptionally able servants who contributed greatly to the success of her reign. But she more than played her part. Vain and capricious she might well have been, but she was a most remarkable woman, intelligent, astute, brave and literally wedded to her country. Her impassioned speech to her troops at Tilbury, given, in fact, after the failure of the Spanish Armada of 1588 (there were two others), could be taken straight out of one of Shakespeare's historical plays: I know I have the body of a weak and feeble woman, but I have the heart and stomach of a King, and of a King of England too. Little wonder that she inspired a national spirit. Likewise in her so-called Golden Speech to parliament in November 1601, a resumé of the history of her reign, she herself voiced the nation's tribute to her:

Though God has raised me high, yet this I account the glory

of my Crown, that I have reigned with your loves ... And though

you have had, and may have, many mightier and wiser princes ...

yet you never had, nor shall have, any that will love you better. 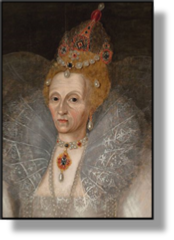 xxxxxBut, fine speeches aside, the last decade of this reign was a troubled one. The Queen herself was failing in health, there were rumours of corruption amongst her senior ministers, and the country was beset with a series of bad harvests and a rising level of inflation. The unemployment and hardship this caused proved too widespread for the Church to handle, and the Poor Law of 1601, which instructed parishes to levy taxes for poor relief and provide work for the able-bodied, only went part of the way to meet the problem.

xxxxxAnd then, of course, there was anxiety over the succession. Although James VI of Scotland was likely to succeed, Elizabeth had always refused to appoint her successor, and it was left to her Secretary of State, Sir Robert Cecil, to enter into secret correspondence with him. It was not until the Queen was on her deathbed that his name was mentioned and she nodded her approval. She died at Richmond House in the early hours of the 14th of March, 1603.