xxxxxAs we have seen, in 1533 (H8) the Spanish conquistador Francisco Pizarro captured and killed the Inca leader, Atahualpa, and the Inca Empire seemed at an end. However, two years later the leader’s half brother Manco Inca, set up a jungle camp in a remote mountain area, and promoted revolts against the Spanish in many parts of the former empire. Following his death, however, a settlement was reached and then in 1572 a Spanish force invaded the jungle camp and captured and killed Tupac Amaru, the last of the Inca royal line. By 1581 the Spanish governed virtually all of South America except Venezuela and Brazil, and the Inca people were held in servitude, though they retained their language and many of their customs and traditions. As we shall see, in 1780 (G3a) a self-styled Tupac Amaru II attempted to revive the empire, but his revolt was ruthlessly crushed the following year. 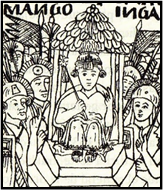 xxxxxAs we have seen, after the Spanish conquistador Francisco Pizarro had captured and killed the Inca leader Atahualpa in 1533 (H8), the Inca Empire appeared to disintegrate. An enemy of Atahualpa, his half brother Manco Inca (illustrated), was then chosen as a mere puppet leader, but two years later he left Cuzco and set up a jungle camp in a remote mountain area called Vitcos. Here he created the semblance of an Inca state, and established a base from which, given time, he hoped to launch a counter attack and regain the lost empire. 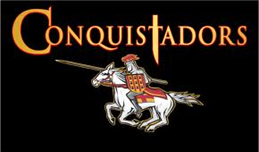 xxxxxHe did, in fact, achieve some surprising success against the Spanish forces, his cause assisted by the fact that for some time the conquistadors themselves were in bitter dispute as to who should govern 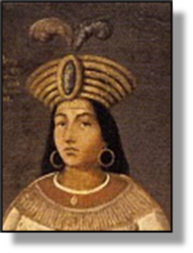 the new territory. In support of Manco, revolts broke out in many parts of the former empire, and at one time Cuzco was put under siege for ten months. But a serious lack of food and the Spanish superiority in weapons took their toll. In 1558, following Manco's death, his son Sayri Tupac, negotiated a settlement and returned to Cuzco. Resistance still continued, but in 1572 a Spanish force reached the mountain stronghold and captured Tupac Amaru (illustrated), the last of the Inca royal line. He was taken to Cuzco and beheaded in a public ceremony. With his death, the Inca Empire was finally laid to rest.

xxxxxIn the meantime the in-fighting as to who should govern Peru - and get the lion's share of the spoils! - finally came to an end with the arrival of the Viceroy Francisco de Toledo in 1569. By the end of his administration in 1581 his territory virtually covered all of South America except Venezuela and Brazil, then in the hands of the Portuguese.

xxxxxAs for the Inca people, the vast majority were reduced to servitude (though that was hardly any change!). Indian chieftains were put in charge of local affairs and were responsible for collecting taxes and providing forced labour when required. But conquered though they were, as a people they managed to retain many of their customs and traditions, including their own language, and this remains the case today, particularly in the Andes region. Furthermore, as we shall see, a revolt in 1780 (G3a) by the self-styled Tupac Amaru II took some time to crush and proved a prelude to the struggle for Peru's independence.