xxxxxThe Italian Matteo Ricci became a Jesuit in 1571. He first served in India, but then spent almost 30 years in China, beginning in 1583, where he became highly regarded by scholars and members of the royal family. In 1597 he was appointed director of Jesuit activities throughout the country. He translated Christian works into Chinese, taught mathematics, and spoke about life in the West. He also produced an amazing map of the world to show China’s geographical position. By the time of his death there were many churches in the south and centre of the country, including one in Peking. In 1692 the Chinese government passed an Edict of Toleration, but later a dispute arose over the value of Confucian thought, and persecution followed. 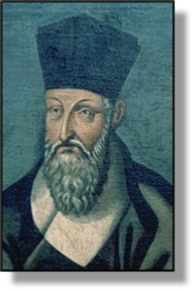 xxxxxMatteo Ricci was born in Macerata, central Italy, and after studying law in Rome, became a Jesuit in 1571. He served in India for a short time, and then at Macau where he began his study of Chinese and Confucianism. In 1583 he entered China and settled in Kwantung Province. Here he spent much time learning the language, studying Chinese literature, and adopting native dress and customs. His travels then took him to Nan-ch'ang and Nanking where he became a close friend of Confucian scholars and princes of the royal family. So accepted and highly regarded did he become within the Chinese community, that in 1597 he was appointed director of Jesuit activities throughout the country and, four years later, was permitted entry to the imperial capital of Peking, generally a no-go area for "foreign barbarians".

xxxxxDuring his stay and travels in China, he was allowed to preach and to translate Christian works into Chinese. He also taught science to Chinese scholars, informed them about the West, and produced a remarkable map of the world, called The Great Map of Ten Thousa

nd Countries to show them their country's geographical position (illustrated). His acknowledged place in Chinese cultural circles also enabled him to provide Europe with its first modern account of life in the Chinese Empire. Among the works he wrote in Chinese, most of them during his years in Peking, were The Secure Treatise on God, The Twenty-five Words and The Ten Paradoxes.

xxxxxBy the time of his death, nearly thirty years after he first arrived in China, Jesuit communities had been established in many cities in the south and centre of the country, a church had been built in Peking itself, and the Christian faith was understood and respected by many of the intelligentsia. Later, in 1692, the Chinese government went so far as to pass an Edict of Toleration, but by that time controversy had broken out in the Church over the extent to which Confucian thought should be incorporated into Christian belief, and this led to a period of persecution.

xxxxxIncidentally, over the years 1574 to 1603 Ricci produced several versions of his world map. In 1620, ten years after his death, his successor, Giulio Aleni, was tasked with amending it so as to show China more in the centre! 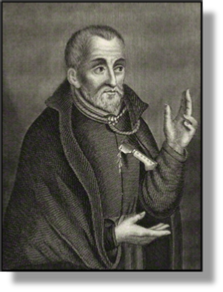 xxxxxA Jesuit missionary who enjoyed no such success was the Englishman Edmund Campion (1540-81). He was born in London and educated at Oxford University. An able scholar and orator, he was ordained a deacon in 1568, but soon rejected Protestantism. He went to Ireland and then to France where he was received into the Roman Catholic Church in 1573.

xxxxxAnxious to re-establish the Catholic faith in his homeland, he became a Jesuit and returned to England in disguise in 1580. He preached at a number of secret locations and avoided detection by keeping on the move. In July 1581, however, having written a scathing attack upon the English Church in a pamphlet entitled Decem Rationes (Ten Reasons), he had 400 copies of it given out just before a service at St. Mary's Church, Oxford. He was found and arrested within three weeks and taken to the Tower of London. He refused to recant, despite being cruelly tortured on the rack, and was eventually hanged at Tyburn on a trumped-up charge of treason. The devotion to his faith and the courage he showed has made him one of the most famous of English martyrs. He was made a saint by Pope Paul VI in 1970. 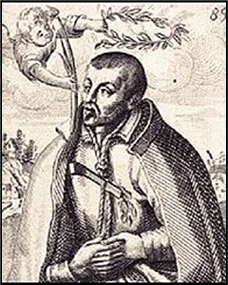 xxxxxThe Englishman Robert Southwell (1561-95) was another Jesuit priest who, having been trained on the continent, returned as a missionary. He arrived in England in 1586 and, hiding in the home of the Earl of Arundel, officiated and preached at secret Catholic services, and wrote letters to strengthen the faith of those Catholics under persecution. In 1587 his An Epistle of Comfort was printed and circulated secretly. He was eventually arrested while celebrating mass in 1592 and, refusing under torture to name any of his fellow missionaries, was held in solitary confinement until his execution in 1595 at the age of 34. Apart from his work as a Jesuit, he also composed religious poetry, his poems being noted for their simplicity and the intensity of their piety (example below).

Last verse - Of the Blessed Sacrament of the Altar

God present is at once in every place,

Yet God in every place is ever one;

So may there be by gifts of ghostly grace,

One man in many rooms, yet filling none;

Since angels may effects of bodies shew

xxxxxA Jesuit who helped to prepare Ricci for his missionary work was the Italian Alessandro Valignano (1539-1606). His work in Japan, where his priests dressed as Buddhist monks, proved highly successful. Royal support was given for the setting up of centres to train men for the priesthood, and four young Christian samurai visited the West in 1582. At his death there were 116 Jesuits working in the country, and the Christian Church numbered 300,000. However, as we shall see (1603 J1), persecution was to follow. 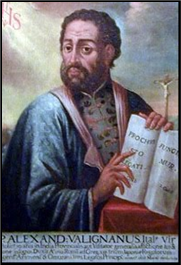 xxxxxA fellow countryman who helped to prepare Ricci for his work in China was the Jesuit missionary Alessandro Valignano (1539-1606). He also spent some thirty years in the Far East, arriving in India in 1574. He preached in a number of areas, but he is best remembered for his pioneer work in Japan. In order to be accepted and respected within Japanese society, his priests dressed like Buddhist monks and fully adopted the people's way of life. So successful was this approach, that Valignano received royal support for the setting up of centres to train natives for the priesthood. In addition, a number of feudal lords became Christian, and in 1582 Vallgnano sent the very first Japanese mission to Europe - four young Christian samurai. They were warmly received by the Pope, feted wherever they went, and painted by the Venetian artist Tintoretto. It is estimated that at Valignano's death, 116 Jesuits were working in the country and the Christian church numbered 300,000. But, as we shall see (1603 J1), a period of persecution was to follow.

xxxxxA Jesuit who enjoyed only limited success was the Englishman Edmund Campion (1540-1581). Ordained a Protestant priest in 1568, he converted to the Roman Catholic Church while in France, and then returned to England in disguise and preached at a number of secret locations. In 1581 he produced a pamphlet strongly attacking the English Church, and this led to his being found and arrested. He refused to recant despite severe torture, and was hanged at Tyburn, London, that year. He was made a saint in 1970.