xxxxxPhilip II of Spain had long wanted to invade and conquer England, mainly on two counts. Firstly to bring that country back into the Catholic fold and, secondly, to put an end to its constant support of the Dutch, then opposing his rule in the Spanish Netherlands. His invasion plan had to be delayed in 1587 - when the English seaman Francis Drake, arriving off Cadiz harbour, damaged his fleet with fire-ships - but in the Spring of 1588 the Great Armada, made up of 130 ships and carrying 20,000 soldiers, put to sea. Though raked by gunfire from the English fleet as it sailed up the English Channel, it managed to reach Calais with the loss of only two vessels. Here the armada was scheduled to support an invasion of south-east England by 30,000 troops, to be launched from the Low Countries, but having no deep water port, it was obliged to anchor off the French coast. Overnight the English drifted fire-ships into the tightly packed Spanish vessels, forcing many to cut their anchors and make for the open sea. Here they were sunk by English warships or blown northwards by the sudden arrival of a fierce gale. Less than half the invincible Great Armada made it back home, and the invasion was averted. Two further armadas were launched in 1597 and 1599, but both had to be abandoned because of bad weather. England had been saved. 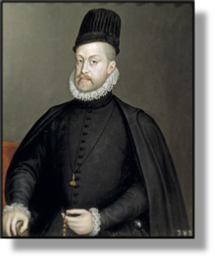 xxxxxPhilip II of Spain (illustrated) had long been contemplating an invasion of England. In 1587 he made preparations for a full-scale attack by sea and land forces. His aim was two-fold. Firstly, on the religious front, he was determined to bring England back into the Catholic fold. Indeed, the Pope himself, Sixtus V, had proclaimed a catholic crusade for the invasion of England and the deposition of Queen Elizabeth. Now that Mary Queen of Scots had been executed there was no hope of the island returning to Roman Catholicism by other means. Secondly, there was the political aspect, just as important if not more so. Since 1566 he had been faced with a revolt of his Protestant subjects in the Netherlands, and these had been constantly assisted, morally and materially, by the English. By 1586 Philip had come to the conclusion that he could not subdue the Dutch without first taming the English. Furthermore, this would put an end to the constant attacks by English adventurers upon Spanish colonies and shipping, particularly in the Caribbean.

xxxxxHis first fleet, formed at Cadiz early in 1587, never left the port. In April a raid by Sir Francis Drake, using fire ships, destroyed thousands of tons of shipping and supplies, and the whole enterprise had to be postponed - Drake called it "singeing the king of Spain's beard". By the spring of 1588, however, a larger fleet, known as the Great Armada and dubbed "Invincible", had been assembled under the command of the Duke of Medina Sidonia. He set sail from Lisbon in July with 130 ships carrying some 20,000 soldiers. The plan was to sail up the English Channel and command that stretch of water while some 30,000 Spanish troops, stationed in the Low Countries and under the command of the Duke of Parma, invaded the south-east of England.

xxxxxAs the Armada moved through the Channel, the English fleet, made up - when at full strength - of 34 warships and about 160 small privateers, sailed parallel with the slow moving Spanish fleet and attempted to rake it with heavy cannon fire, aiming to break up the Armada before it reached the Netherlands. Two galleons were sunk in battles fought off Plymouth, Portland Bill and the Isle of Wight, but the Spanish, handling their ships well, kept their formation, and reached Calais on July 28th. The Duke of Parma began to embark his invasion troops, assuming that all had gone according to plan. 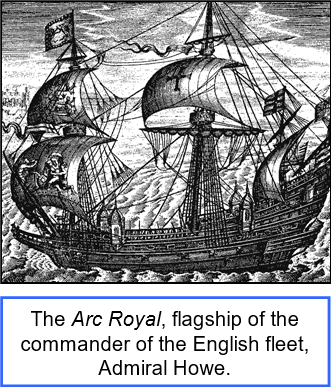 xxxxxBut the Armada, having no deep-water port in the Netherlands, was anchored in an exposed position off the French coast. Overnight, the English drifted fire ships into the middle of the tightly packed Spanish fleet. Amid the panic, carnage and confusion that followed, the vast majority of the trapped crews cut free their anchors and made for the open sea, obliged to sail northwards because of a sudden change in the direction of the wind. Just off Gravelines the English caught up with the rear of the Armada - now in full flight and much reduced in size - and sank several more galleons before running out of ammunition. A fierce gale delivered the final blow. The Spanish force was scattered, and it was left for individual ships to try to sail around the north of Scotland and make their way back home along the west coast of Ireland. A further 28 ships were wrecked, and less than half the original force made it back to Spain. 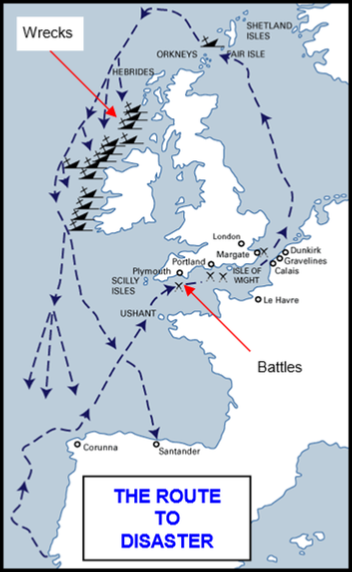 xxxxxFor Spain, the failure of the Armada was an embarrassing and costly defeat for so powerful a nation, and might be seen as marking the very beginning of this impressive empire's gradual decline. It was a brave attempt by the Spanish but, logistically, it was clearly beyond their capability. For England, it was certainly a boost to national pride, and it undoubtedly secured Protestantism as the state religion. Furthermore, under the influence of men such as Drake and Hawkins, it not only confirmed England as a major naval power, but as the leader of a new concept of naval warfare. The aim was no longer to grapple with the enemy and decide the contest simply by hand-to-hand fighting. Victory at sea was now to depend more upon firepower and the seaman's ability to manoeuvre specially-designed warships to make the best use of their cannons. In that way, enemy vessels need not be boarded, or only when the guns had done their worst. Henry VIII's fleet had gone a long way along that tactical road; the defeat of the Armada confirmed its viability.

xxxxxThe defeat of the Armada did not end the war. This lasted until 1604. In fact two further armadas were launched, in 1597 and 1599, but both had to be abandoned because of bad weather. In the meantime, The Revenge was captured by the Spaniards in an action off the Azores, a Spanish force landed in Cornwall and set fire to the ports of Mousehole and Penzance, and Admiral Howard sacked Cadiz in 1596 and brought home a great deal of booty. And it was in 1601 that Philip II sent men and arms to support the Earl of Tyrone, fighting against the English in Ireland at that time.

xxxxxIncidentally, relations between Spain and England had become strained, indeed severed, long before the launching of the Armada. In 1568 three Spanish treasure ships, bound for the Spanish Netherlands with pay for the Duke of Alva and his troops, were driven into Plymouth harbour by a storm. They were at once impounded by Elizabeth, much to the anger of Philip II. He responded by confiscating all English shipping then in Spanish ports. ……

xxxxx…… So confident were the Spanish that the invasion of England would succeed, that 180 Catholic priests accompanied the fighting men in order to re-establish the Roman Catholic Church once the island had been taken over! 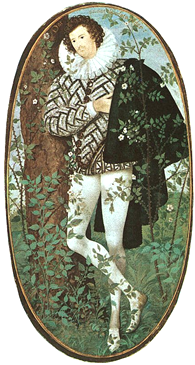 xxxxxThe battle illustrated above is almost certainly the work of the English artist Nicholas Hilliard (1547-1619). It is convenient to mention him here but, in fact, his fame rests almost exclusively upon his superb work as a miniaturist. He was trained as a jeweller, and many of his tiny portraits, known for their delicacy and brilliant colouring, were worn as adornment. Appointed miniaturist and goldsmith to the queen in about 1570, he made many portraits of her and of the prominent members of her court. In 1584 he was also responsible for the design and making of Elizabeth's second great royal seal (illustrated below). 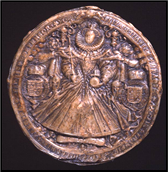 xxxxxHe explained the principles of his art in his Treatise on the Arte of Limning (i.e. miniature painting), published about 1600. In this he acknowledged his debt to the German portrait painter and miniaturist Hans Holbein the Younger. He later worked for James I, mainly as a goldsmith. Two fine examples of his portraiture can be seen in the Victoria and Albert Museum in London: An Unknown Man Against a Background of Flames and An Unknown Youth Leaning Against a Tree Among Roses (illustrated here). His son, Lawrence, was also a miniaturist.

xxxxxThe English artist Nicholas Hilliard (1547-1619), painted a picture of the sea battle with the Armada, but he was best known, in fact, for his superb work as a miniaturist. Trained as a goldsmith, he was appointed to the Queen in about 1570, and produced many portraits of her and members of her court, some of them adorning pieces of jewellery. He explained his art in his Treatise on the Arte of Limning (miniature painting). In it he acknowledges his debt to the German painter and miniaturist Hans Holbein the Younger. Examples of his work can be seen in the Victoria and Albert Museum, London.