xxxxxEl Greco ranks alongside Velazquez and Goya as one of the great Spanish masters. As a young artist he worked in Titian’s workshop, and was much influenced by the works of Tintoretto, Raphael and Michelangelo. He made his home in Spain in 1577 where, having been born in Crete, he was known as “The Greek”. His distinctive, individual style soon marked him out as an artist of rare, if somewhat bizarre talent. His elongated, distorted figures were full of vigour, and his bright, glowing colours were disturbing. He paid little attention to light source or perspective but, in a strange way, this added to the impact of his work. His off-beat style can best be seen in his The Burial of Count Orgaz of 1586. Other works include The Adoration of the Shepherds, The Agony in the Garden, The Disrobing of Christ, and St. Peter in Tears. He also produced a number of dramatic landscapes, and his skill at portraiture can be seen in such works as Lady in a fur rap and Cardinal Nino de Guevara. His only mythological work was his Laocoon, a dramatic version of the famous classical sculpture. His unconventional style and crowded composition meant that his work was not fully appreciated until the 20th century, with the emergence of abstract painting. 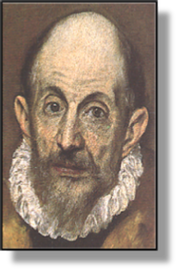 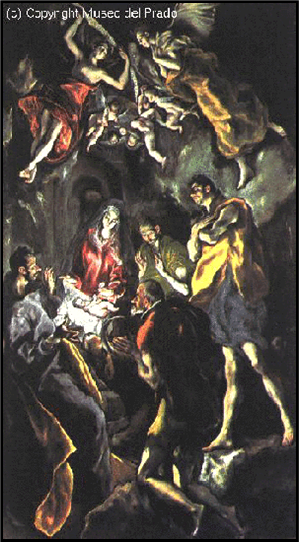 xxxxxEl Greco was born in Candia (Heraklion) on the island of Crete, then in Venetian hands, and was probably trained as an icon painter by Greek monks. His real name was Domenikos Theotokopoulos. As a young artist he went to Venice where he worked in Titian's workshop and was clearly impressed by the works of Tintoretto. His Christ Healing the Blindman belongs to this period, and leans heavily upon his master's composition and colour. He then studied in Rome for six years and - consciously or not - was influenced by the colour of Raphael and the sculptural skill of Michelangelo, as seen in his Pietà, completed in 1572, and his Purification of the Temple of 1575.

xxxxxIn 1577 he journeyed to Spain and made his home in Toledo, a city which, apart from being famous for its arts and crafts, was an important religious centre, being the headquarters of the Counter Reformation and its ardent supporters, the Jesuits. It was in this spiritual and artistic environment that he spent the most creative period of his life and came to be known as "The Greek". At one time he did aspire to work for Philip II of Spain, hoping to paint frescoes

for the Escorial, the newly built royal palace near Madrid, but his painting The Martyrdom of St. Maurice did not receive royal approval. It seems that the king did not like his interpretation of the subject and/or the eccentric style in which it was painted.

xxxxxIndeed, El Greco's distinctive and very individual style soon marked him out as an artist of extraordinary, if somewhat bizarre talent. His elongated and distorted figures - a product, he argued, of his emotion not of his eye - are full of intense expression and vigorous movement, and his use of brilliant, glowing colours, are calculated to clash and to disturb. Little if any attention is paid to light source or perspective, but this seems to add rather than detract from the sheer impact of his work, particularly in religious subjects where emotions ran high. 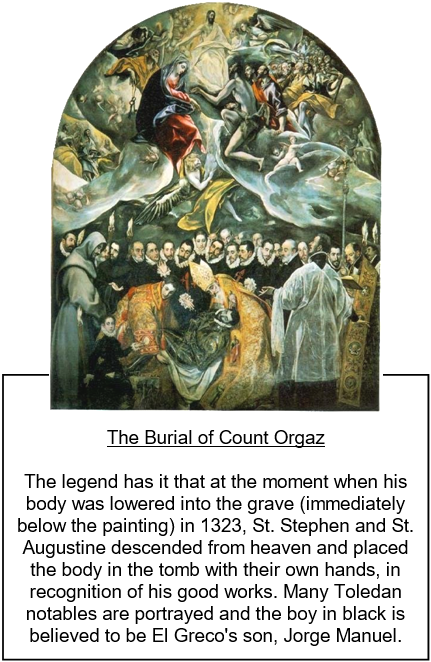 xxxxxThe style that came to typify El Greco's work can first be observed in his Assumption of the Virgin, painted for the church of Santo Domingo el Antiguo in 1577. It can best be seen in his vast masterpiece The Burial of Count Orgaz (illustrated), completed in 1586, with its eerie light and swirling image of heaven above and its mundane earth below. Other works of this nature include The Adoration of the Shepherds (illustrated above) and his famous The Agony in the Garden (illustrated below). His various versions of Christ Driving the Traders from the Temple, a dynamic action which could be likened to the Counter Reformation cleansing the Church of heresy, are often given as examples of the influence of Michelangelo and Raphael so far as the figures and composition are concerned. And the Italian influence can be seen in his Disrobing of Christ, painted for Toledo Cathedral. In common with so many of his mystic visions, this was ideally suited to satisfy the spiritual and cultural needs of the city. And like the Burial of Count Orgaz, this crowded scene clearly shows the artist's dread of unfilled space, (known as horror vacui) as well as his mannerist style, a reaction against the strict classical rules of the Renaissance. Then there are his superb renderings of the saints, the foremost one, perhaps, being his highly sensitive portrayal of St. Peter in Tears (illustrated below).

xxxxxApart from these highly-charged emotional scenes, he painted elegant, realistic portraits, including the self-portrait above. One of his outstanding works is his personal interpretation of Cardinal Nino de Guevara of 1598, and there is a superb collection of his portraiture in the Prado Museum, Madrid. Worthy of special mention in his later work is The Vision of the Apocalypse: Breaking the Fifth Seal, an event captured by the up-stretched, elongated bodies, moving like flickering flames of fire. And perhaps he had the same subject in mind when he painted one of his three impressive landscapes, View of Toledo (one illustrated below), a work in which the city awaits the coming of a horrifying storm. His only mythological painting, Laocoon, is an unusual and highly dramatic version of the famous piece of classical sculpture, discovered in 1506. 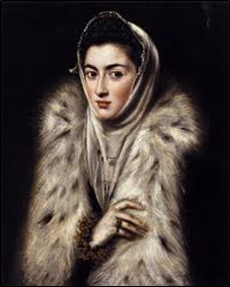 xxxxxHis output, be it portraits, paintings or altar pieces, was prodigious and, in his day, his work was admired and much in demand. He lived in a large house within the city, received the local nobility and intellectuals, and was not short of commissions, particularly from the local churches and monasteries. As the fortunes of the city waned, however, so did his own, and his later years were lived in more modest circumstances. He was buried in the church of Santo Domingo el Antiguo, but because work on his vault was never completed, his remains were then transferred to the nearby monastery of San Torcuatoto. Unfortunately, some years later this building was totally destroyed. (This Lady in a fur wrap might be Jeronima de las Cuevas, his female companion and mother of his son. Note the painting of the fur.) 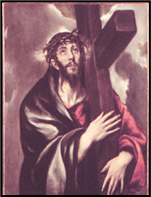 xxxxxEl Greco's individual genius as an artist, born out of a fusion of eastern and western traditions, is not difficult to see, and he ranks alongside Goya and Velazquez as one of the great Spanish masters. That he had no followers of any significance is not a reflection on his value, but a testimony to his rare and unique contribution. Indeed, so off-beat was his style that as an artist he was virtually ignored for three hundred years. It was not until the twentieth century, with the emergence of abstract painting, that his worth became appreciated, and he was given his rightful place in the history of Spanish art.

xxxxxShown here are The Tears of St. Peter, The Agony in the Garden, View of Toledo, and Boy lighting a candle.

xxxxxIncidentally, the story goes that while El Greco was working in Rome, Pope Pius V, concerned about the nudity on display in Michelangelo's Last Judgement in the Sistine Chapel, asked him to paint-in loin cloths at the appropriate places! El Greco agreed to do this, but suggested that a better solution would be for him to paint over Michelangelo's entire work with his own, better version of the subject. This very suggestion so deeply offended his fellow artists and the notables of the city that he was then obliged to depart for Spain!

xxxxxIt is a good story but not a likely one. For a start, El Greco was not a fresco painter, and would hardly have offered to take on such a task without the necessary skill. Secondly, it is known that he was a great admirer of Michelangelo and, furthermore, was fully aware of the esteem in which his work was held. But there is some truth in the tale. The Pope did object to the nudity, and he did employ an artist to insert draperies where required. His identity is unknown, but he was dubbed "the breeches maker".